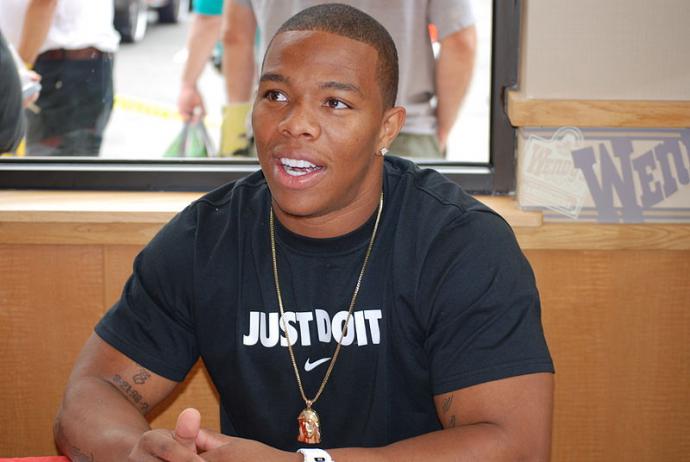 It’s difficult to watch the grainy video of Janay Palmer without getting a knot in the pit of your stomach. A viral video of a football player lugging his unconscious fiancé around like a garbage bag was seen by millions of Americans, each pixel flickering as a celebrated millionaire athlete hauled his incapacitated girlfriend out of an elevator.

Ray Rice, running back for the Baltimore Ravens, had allegedly knocked her out during an elevator ride in which they’d had a dispute. Rice was eventually charged with aggravated assault in the third degree, and entered into an intervention program to avoid trial. He and Palmer wedded just a day after the initial charges were filed and released statements that they are in counseling and are “in a better place.”

The ruling felt absurdly lenient—it can be attributed in part to the fact that Palmer herself accepted partial blame in the dispute and she didn’t work with prosecutors to press charges. In the wake of the court’s ruling, sports fans speculated on how the NFL would come down on Rice. The league had been issuing severe punishments for players’ marijuana use, including a season-long suspension for Josh Gordon of the Cleveland Browns and indefinite suspension for Jacksonville Jaguar’s Justin Blackmon. Seattle Seahawk’s Walter Thurmond was suspended for four games when he tested positive for “performance enhancing drug” like Adderall. Earlier this year, Richie Incognito of the Miami Dolphins served an eight-game suspension for bullying and harassing a teammate. Surely Rice’s domestic violence charge would garner him a season-long suspension at the least.

It didn’t. Last week, the league announced that Rice would face a mere two-game suspension for his domestic violence charge and later defended its decision as “appropriate.”

Sports writers and fans were stunned. A player loses out on an entire season for smoking weed, but this guy was charged with assault on his wife and misses two games? Universally, folks agreed the punishment against Rice didn’t make sense, including sports commentator Stephen A. Smith. As host and premiere talking head of ESPN’s First Take, Smith has been known (at least to the sports world) for making controversial comments, but his latest rant about Rice’s suspension and domestic violence went beyond provocative and into the maddening territory of WTFness:

So let’s try to make sure that we can do our part in making sure that that doesn’t happen. Now you got some dudes that are just horrible and they’re going to do it anyway, and there’s never an excuse to put your hands on a woman. But domestic violence or whatever the case may be, with men putting their hands on women, is obviously a very real, real issue in our society. And I think that just talking about what guys shouldn’t do, we got to also make sure that you can do your part to do whatever you can do to make, to try to make sure it doesn’t happen. We know they’re wrong. We know they’re criminals. We know they probably deserve to be in jail. In Ray Rice’s case, he probably deserves more than a 2-game suspension which we both acknowledged. But at the same time, we also have to make sure that we learn as much as we can about elements of provocation. Not that there’s real provocation, but the elements of provocation, you got to make sure that you address them, because we’ve got to do is do what we can to try to prevent the situation from happening in any way. And I don’t think that’s broached enough, is all I’m saying. No point of blame.

Did Smith just say what we thought he said? That victims of domestic violence are partially responsible for assaults against them because of “elements of provocation”? (Sadly, Whoopi Goldberg felt like she had to contribute too.) In listening to him speak, it felt like Smith tried to obscure this sentiment in his rambling, but any careful viewer could hear what he was saying.

One such viewer was Michelle Beadle, his fellow anchor at ESPN’s SportsNation. Beadle heard Smith’s words loud and clear and took to Twitter to share her outrage: 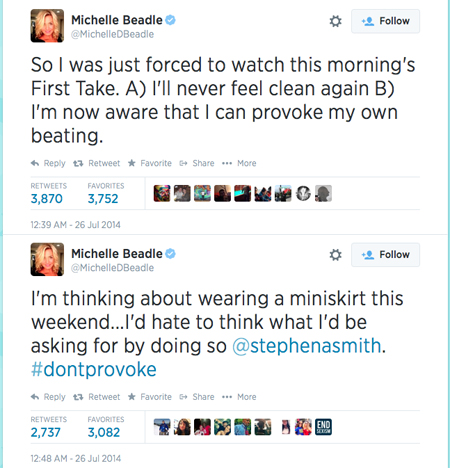 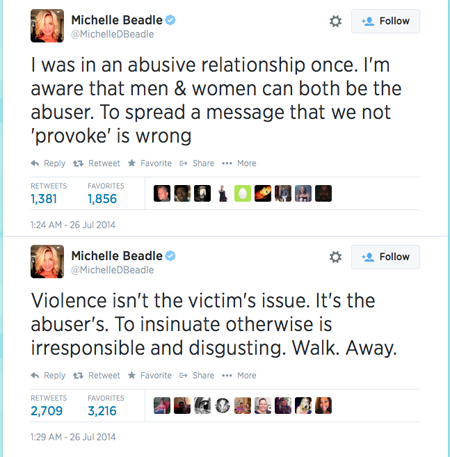 Beadle didn’t mince words and called out Smith for victim-blaming, which couldn’t have been an easy decision. She must have known that another ESPN analyst, Bill Simmons, was suspended from Twitter after he criticized First Take last year. Plus, in the male-dominated sphere that is professional sports, and the reporting of it, women continue to face an uphill battle to be taken seriously as reporters before their gender is brought into the picture. When Beadle called out Smith, a personality on one of ESPN’s most well-known programs, she placed her gender—and her experiences as a victim of domestic violence—at the forefront.

Beadle’s tweets felt honest and off-script in an industry where most things happening off the field and off the court have been sanitized and packaged neatly for marketing purposes. Beadle’s sentiment wasn’t shared by everyone and she quickly faced the flood of Twitter harassment that is often easily hurled at women through the anonymity that is a 140-character threat. They cited Beadle’s unprofessionalism in calling out a colleague so publicly, without mentioning that Smith’s own questionable professionalism in even weighing in on what domestic violence looks like. They diminished Beadle by saying that she was making a big deal out of the issue and that no one cared. Even after Smith offered a non-apology incoherently shared on Twitter, and a pre-taped on-air apology, ESPN suspended Smith from First Take for a week. That’s when the twittershit hit the fan: Smith supporters blamed Beadle for the suspension and started harassing her constantly on Twitter.

The meta-irony and similarities are unmistakable: blaming Beadle for Smith’s words and questioning Palmer’s role in Rice knocking her unconscious. From behind keyboards and within the invisible confines of domestic relationships, it feels like these women are unable to fully express their own agency without backlash. Although Palmer had not pressed charges against Rice, one can only imagine the vitriol she would face if she had been deemed responsible for sidelining a football player. Try not to cringe with anger and confusion when you hear the crowd cheer and applaud in support of Rice during practice this Monday in a video clip uploaded by the Ravens and described euphemistically as his return to the field “since his troubled offseason.”

When the NFL chose to discipline Rice with just a two-game suspension, the message they are sending to their 20 millions fans who watch their games—almost half of whom are women according to the NFL—that domestic violence is no big deal.

And what does it mean that Palmer, as a black woman, is the silent actor in all of this when black women experience intimate partner violence at a rate 35 percent higher than that of white women? In our saturated media landscape, there is seldom room for nuance, especially when discussions of violence against women happens on a sports talk show. Through all of this, we have yet to hear directly from Palmer herself. But the Baltimore Ravens felt it was appropriate to speak on her behalf when they tweeted:

On Thursday, Rice addressed the media and continued to express remorse for the “biggest mistake” of his life. “Violence of any kind, especially man on a woman, is just not right,” he continued. “We will go out there and speak out against domestic violence.” Rice talked about his two-year-old daughter with Palmer, and the shame he feels in knowing that one day she will find these stories about her father and mother.

As contrite as Rice may appear now, it doesn’t negate the fact that there has yet to be a frank and thoughtful discussion in the sports world about how to address, and combat, domestic violence. The only information viewers have is in a viral 49-second clip and what TMZ called a “mutual attack.” The clip will live on, viewed again and again, and will be remembered alongside his meager punishment and the persistent murmurings that the woman in the video did this to herself.

Amy Lam is the Associate Editor at Bitch and wants the Baltimore Ravens, the NFL, and commissioner Roger Goodell to get their shit together. Photo of Ray Rice via Creative Commons.

I cannot believe that anyone is cheering for Ray Rice or indicting Janya Palmer as provoking the incident against herself.
Ray Rice is a modern day warrior, incredibly strong. He freaking knocked her unconscious. The Baltimore Raven front office, the NFL and Commissioner Goddell are way out of line in their irresponsible reaction to this nearly deadly assault (Pot smoking: VERY BAD, Knocking the shit out of the mother of your children:NOT SO MUCH.) How easily OJ and a very dead Nicole Simpson are forgotten. I wonder what Bob Costas has to say about this... recall his very shook-up, on-air reaction to the OJ car chase.
The Tweets the brave Beadle have been receiving sack of violence, themselves.
Palmer is a victim. The future could find her in another dangerous situation at home -or in an elevator, a restaurant,a parking garage. Who knows? 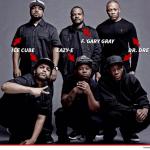 by Aya de Leon
Now, the film avoids any discussion of how attacked and beat up Dee Barnes in a club, causing her lasting damage.