The OTHER Teen Vampire Romance Movie 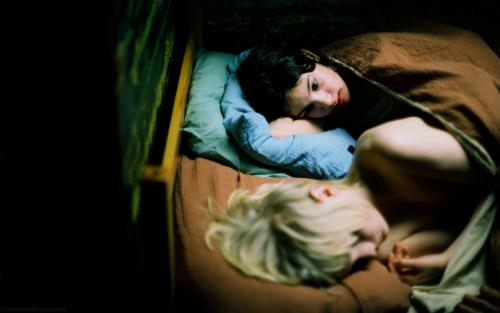 Several months ago, I remember hearing a movie reviewer say, “If you seen one teen vampire romance film this year, let it be Let The Right One In.” I figured that since the Bitch site has been entranced by Twilight for what feels like months now, it would be appropriate to give this film its proper dues.

So, in honor of Valentine’s Day and Kelsey’s blog post on my favorite Swedish import, let me tell you a little about Let The Right One In.

Let The Right One In is a Swedish film set in the early 1980’s and focused on a 12-year-old loner named Oskar. 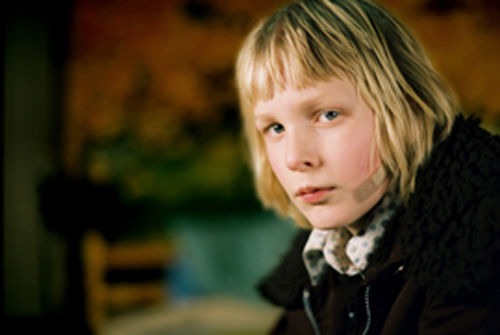 Besides having the world’s most awkward haircut, it is the intense bullying Oskar faces in school that captures the sympathy of its audience (or, at least, the former dodgeball-targets in attendance). While practicing an imagined violent confrontation of his bullies (involving him repeatedly stabbing a knife into a tree), Oskar’s new neighbor, Eli, appears behind him. 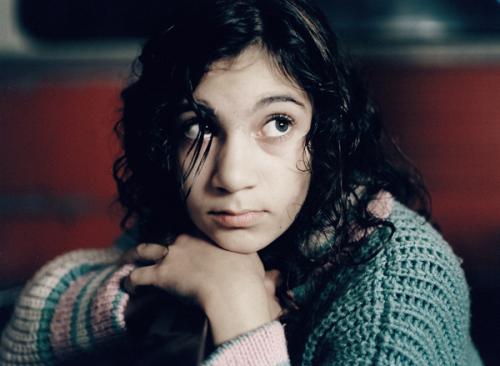 What follows is a raw depiction of teenage (tweenage?) companionship. Eli and Oskar’s bond is formed over their shared outsider status and the pain that accompanies not belonging. What they find in each other is unconditional acceptance. Eli likes Oskar, despite his cowardly tendencies, and Oskar likes Eli, despite her being a vampire.

Eli is more or less the only vampire featured in Let The Right One In. Because of her presentation as female, it is difficult to not make a connection between her vampiric problems (blood and bleeding, fear of transformation, uncertainties of self) and those relating to her puberty (a stage that she will be in permanently). Eli is depicted as being powerful and dangerous, but never vilified. These images of her violent capabilities are woven in with scenes of her budding sexuality. She is unclear about her role in the world and recognizes her destructive potential. Let The Right One In may be ultimately centered on Oskar’s drama, but it does an amazing job of depicting the tumultuous and frequently disturbing experience of moving from girl to women.

As was pointed out in the comments section, while Eli is played by a female actress, the character’s gender identity is much more complex (a point that is possibly more elaborated on in the book). This brings in an additional discussion of sexuality and relationships, as Oskar’s devotion to Eli appears to transcend both vampirism and traditional gender roles. I strongly suggest reading Loren Krywanczyk’s review of the film for a more in depth look at this element of their relationship.

Watching Let The Right One In reminded me of conversations I had with a film professor last year regarding the potential for a feminist horror genre. Rather than using hours of film dedicated to torturing female victims for pleasure, Let The Right One In appropriately layers the horror and hardships of being/being with a vampire on top of society’s fear of girls in transition (not to mention fears of menstruation and lack of cleanliness). As mentioned earlier and pointed out in the comments section, while Eli’s gender may not be so clear cut, her presentation as female still brings up these questions of how the horror genre can be used to depict and address the horror of lived female experiences.

Let The Right One In might be hard to find outside of second-run theaters at this point, but it is definitely worth seeing. As further temptation, here is the trailer.

Eli is a boy eunuch, not a girl. This is more clear in the novel, but there's an expository scene in which Oskar sees Eli naked and she has no genitals/a scar in their place. Eli is played by a girl in the movie, though, and she's lovely and does an amazing job. GREAT MOVIE!

Thanks for the correction (to both of you)! I interpreting the "I'm not a girl" comment to mean that her alternative identity was that of a vampire, rather than to reference an alternative gender all together. I still think that her presentation/passing as a female makes an interesting connection to the horror genre. Anyway, thanks for the insights!

<a href="http://feministreview.blogspot.com/search?q=let+the+right+one+in">Loren Krywanczyk's review</a> had a really interesting take on this flick. Here's part of what she wrote: Oskar’s and Eli’s relationship could be referred to as “queer,” in a sense of the term not synonymous with “homosexual.” When Oskar asks Eli if she will “go steady” with him, she responds, “Oskar, I’m not a girl.” Oskar’s response? “Well, are we going steady or not?” The definitions of “girl” and “boy” are of little to no use to either of these characters.

Let the Right One In is brilliant, wonderful, strange and strangely funny, hot and cold in the best of ways. I saw it recently at an art museum's film theater--I believe it can still be found in arty, eclectic cinemas like that.

Do whatever you can to see it.

Another movie to check out in the "feminist horror" genre is 2007's "Teeth". I'm sure this has been discussed at length on this blog. A great and artfully done horror movie that turns the misogynistic idea of Vagina Dentata on its head. I would also put 1975's "The Stepford Wives" in this category.

There are also horror films that deal with women's issues but aren't as easily grouped into a "feminist" genre. Specifically 2000's "Ginger Snaps" (which has spawned a string of sequels) and John Carpenter's "Pro-Life (2006)".

These are awesome suggestions. Thanks so much!

First of all, I loved this movie. In my top 5 for the year, for sure.

It should be pointed out, though, that vampire's attitude toward love is, in fact, vampiric. He/she spots outcast boys with a violent streak, befriends them, seduces them, then uses their feelings for her to enslave them, forcing them to protect her and kill for her. Oskar's eventual fate is revealed in that of the lonely old man whose place he is taking.

so is eli a girl or a boy generally. im confused

and im talking about the movie

The concept of movie is good. Director want to make a good movie but i think he has some preception about their previous movie. So he is try to make the movie with using same frame which he has used in his previous movies. At the same time he looks littile bit confused while picctrization of this movie. As a result this Movie is become average movie. Although all the charector plays a very good roles tin this movie.
=================
John Assam
Star in your own personalized vampire romance novel! YOU select the heroine and hero and best friend. Full-length novels starring YOU!
<a href="http://www.BookByYou.com/Vampire">Personalized Vampire Romance Novels from Book By You!</a>