The Post-Colonial Politics of “Game of Thrones” | Bitch Media

The Post-Colonial Politics of “Game of Thrones” 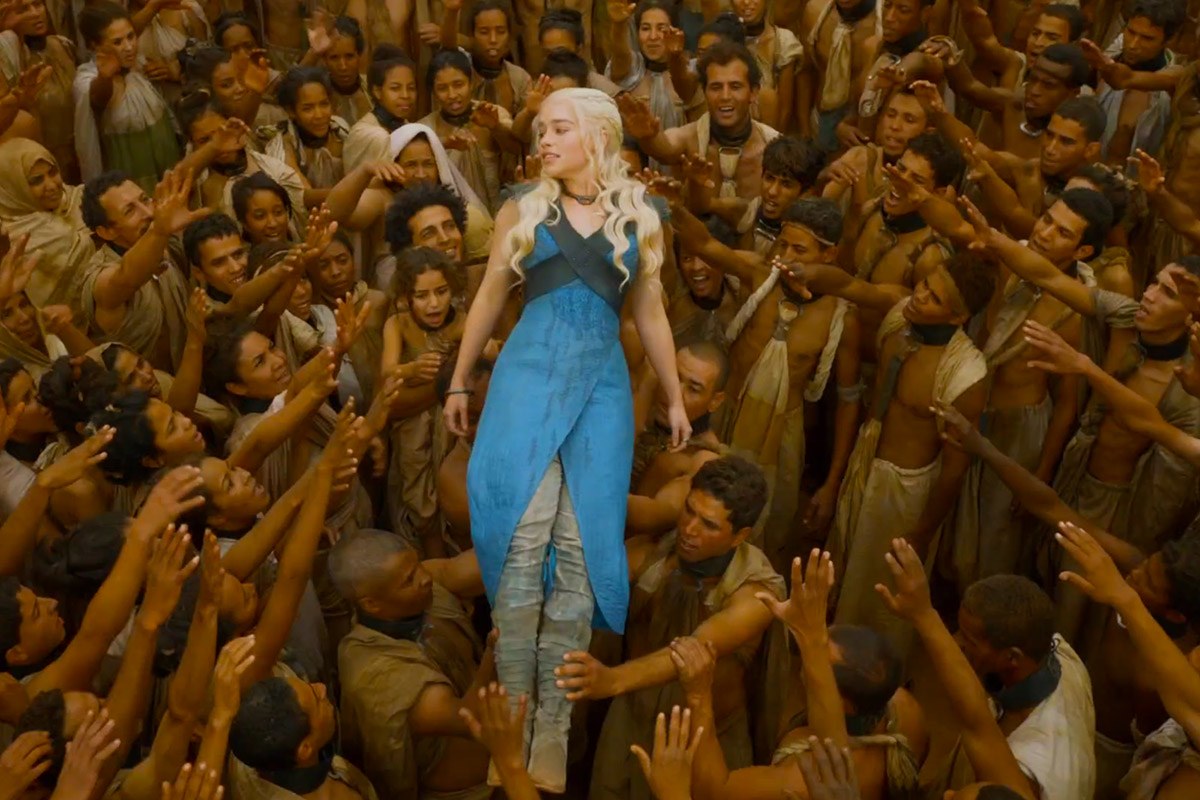 Emilia Clarke as Daenerys Targaryen in Game of Thrones (HBO)

This story was originally published on May 7, 2015.

People who care about Game of Thrones, including the author of the books, often say that the show’s controversial amount of rape and bloodshed is justifiable because it’s “historically accurate.” The show is set in a vaguely “medieval” patriarchal world—though historians and pop culture analysts point out that Game of Thrones is not actually medieval. I believe, more accurately, that Game of Thrones draws upon a very modern world: a post-colonial world. The show’s storyline is a colonized version of violence against women, people of color, and marginalized groups. Why does this matter? Because we are still living in a post-colonial world. The violence on Game of Thrones isn’t locked away in the past—the show can help viewers recognize the legacy of violence, exploitation, and inequality in our modern world. The show’s brutal violence reflects on our current reality, not a fictional past.

Post-colonialism, to simplify, understands the world through the historical power relationship between colonizers and colonized, in the way feminism understands the world through gender and Marxism through class. Fans of George R.R. Martin’s book lore will know that Westeros is technically a colonized land—the First Men took the land from and almost eradicated its indigenous inhabitants, the Children of the Forest. The Andals came next, like the Anglo-Saxons to England. The existence of the continent of Essos, where most actors of color have been relegated for the past five seasons, embodies the sort of the exoticized “East” that philosophers like Edward Said would deem an Orientalist fantasy, filled with strange gods, sex practices, and conveniently, enslavement of bodies.

What the show really asks is, “What if white people had committed colonial-level horrors on other white people?” In other words, all the blood and boobs, rape and torture, are not just HBO gratuitousness, but an expression of how European colonizers treated their colonized subjects, masquerading as domestic high-fantasy in Belfast castles. This isn’t to say that Europe in the Middle Ages wasn’t violent in the way Game of Thrones is violent. The Medieval era was certainly not all flowers and fairies for women, people of color, or poor people. Yet the relationships of power shown in the show derive from a style of violence more aligned with 18th century and modern imperialism’s dehumanization and exploitation.

For instance, season three of Game of Thrones featured the controversial story arc of Daenerys Targaryen’s (Emilia Clarke) “White Woman’s Burden” of liberating the slaves around Essos, culminating in the questionable image of her crowd-surfing, a blonde, white center surrounded by dark bodies calling her “mother.” This season begins to critique her liberation campaign, pointing out the hypocrisies within Dany’s vision. She refuses to open the fighting pits in her anti-slavery stance, yet leaves her own dragons, her other “children,” in chains. She faces grassroots resistance from the rebellious group, the Sons of the Harpy, showing discontent with her and her council of (almost all) white dudes. No storyline more clearly outlines the relationship between “white people who think they mean well” and a population struggling to re-assert agency in problematic ways. You can draw parallels to when the British attempted to outlaw the practice of sati (wife burning) in India, a decision that found itself marred in anti-colonial tensions and polluted by the colonial power relationship.

Season five also introduces the location of Dorne, a region home to an interracial mix of refugees from Essos called the Rhoynar, considered by Martin to be somewhat Palestinian, who interbred with the colonizing Andals. Dorne’s filming took place in Spain, with the new cast characters of Dornish characters including many biracial actresses, like the Maori-Kiwi actress Keisha Castle-Hughes and Singaporean-British actress Jessica Henwick. Dorne is the only region in Westeros that resisted the imperial conquest of the Targaryens, like other real-world anti-colonial holdouts, Ethiopia and Thailand. As a result, the Dornish have kept their “exotic” customs of lax primogeniture, sexual licentiousness, and, you know, giving women rights. This season’s story in Dorne highlights the tensions between colonial resistors and the encroaching imperial powers, as the late Oberyn Martell’s family struggles with their resentment toward the Lannisters and King’s Landing.

Overall, the argument that Game of Thrones is more modern than medieval is important, not just for giving critical theorists and historians something to blog about. When we relegate the post-colonial violence of Game of Thrones to some sort of fantasy past, we erase how that violence perpetuates itself in the present. When our own country commits injustice and atrocity, we often become, as my philosopher friend John Bova put it, “stymied by a sort of incomprehension: how can this happen?” Abu Ghraib was 2003, not the Dark Ages. How could people do such things? It must be mismanagement, we think. It must be bad apples. But maybe we already know the explanation. We know what happens when the system dehumanizes an entire group of people, “denying a political bond between extractors and extractees.” We know what colonial power looks like. We simply fail to recognize this when it is our own government, our own Westeros, exercising it.

We cringe at the torture and degradation of Theon Greyjoy (Alfie Allen), yet we ignore the atrocities committed at Guantanamo Bay and in dark cells across the world by the U.S. government. We bemoan the state of Sansa Stark (Sophie Turner), yet we struggle to hold sexual aggressors and domestic abusers in power accountable. We cry as the Lannisters kill off all our favorite characters, while everyday, Black American citizens are killed by police brutality and systemic oppression. As the character Varys ponders in this season’s premiere, “Perhaps we’ve grown so used to horror, we’ve forgotten there could be another way.”

Vivienne Chen is a fiction writer, journalist, and activist interested in gender/sexuality, post-colonialism, and class. She is based in Shanghai researching and revising her first novel.