The Problems With Trainwreck’s Casual Racism 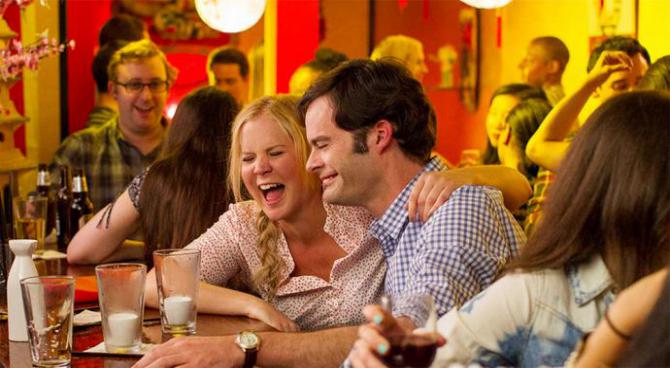 Can you imagine if two spirit and queer and trans people of color owned media? We’d reverse the current racial representation in films, casting people of color as 76 percent of speaking roles. We would orchestrate elaborate calls for reparations, especially from people who impersonate people of color. Unfortunately, this isn’t the case. Today, even the “edgy” films revolve around white, straight narratives. This hit home for me last week when I went to go see Amy Schumer’s new film Trainwreck. If most of us want progress—at the very least, a shift in the way women are portrayed—why isn’t anyone talking about this film's inherent racism?

Every time I go into a movie theater, I am reminded that movies—even when they're lighthearted and intended to be escapist—are usually serving a straight, white audience. Trainwreck centers on Amy (played by Amy Schumer), a pot-loving, nonmonogamous white woman and her trials and travails as she starts dating the upper middle-class dude who’s clearly “Mr. Right” (Aaron, played by Bill Hader). The comedy—lauded for its “edginess”—is chock full of casual racism. It’s celebrated and marketed as a feminist rom-com, but there is a huge population of women missing from this sexually charged fantasy. In fact, if you reduced Amy Schumer’s new comedy to every word spoken by a woman of color, it would feature Black people helping white couples cement their monogamy, Brandy and Monica singing “The Boy Is Mine” as background bar music, and an aggressive Latina and Black woman heckling Amy on the subway. Many, many rom-coms have this problem and Schumer is not the first white female comedian to have a racial blind spot, but the fact that Trainwreck is supposed to be a feminist subversion of the rom-com genre makes it extra disappointing.

A few minutes into the film, I had the clear realization, “Oh, well, this film just isn’t for me.” It’s for white, straight audiences. After Amy is introduced, during a montage of her hookups, she is horrified to have woken up in Staten Island having slept with a “Puerto Rican Gollum.” Following this scene, we are taken to her job at S’nuff, a misogynistic men’s magazine, where the only people of color are represented by Fresh off the Boat’s Randall Park and a Black intern (sans actual speaking parts). Which makes me think, where do I fit in this equation?

We have seen this trope repeated in Sex in the City, Girls, and in Trainwreck. While white women are given the opportunity to explore their sexuality, parading in and out of our neighborhoods, consuming our culture, women of color are physically removed from this dialogue of sexual liberation. Throughout the movie, there are numerous jabs at people of color—John Cena talks “dirty” to Amy in Chinese, and later threatens to sexually assault a Black man, who he calls “Coco Bean”: “Momma say knock you out, featuring my fist and your dick hole.” The film does prominently feature Black men—like LeBron James, playing “himself” as Aaron’s best friend—but their characters aren’t the center of the story. Personally, I’m rooting for the Bill Hader-less sequel, starring Lebron James. 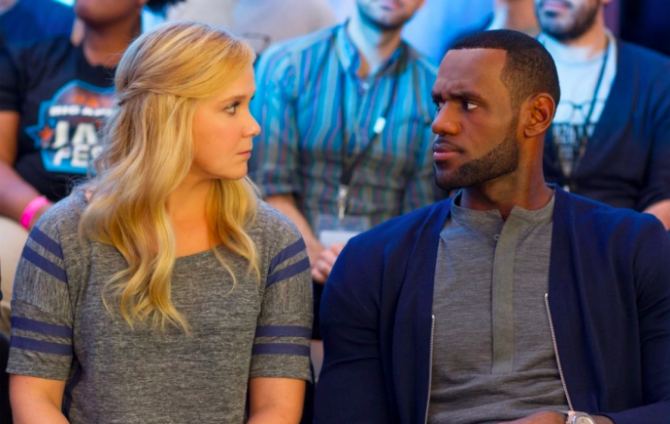 Despite the apparent wins for white women, even Amy’s identity is limited to the desires and needs of the white men in her life. Throughout the movie, Amy’s character centers on her father, Gordon (Colin Quinn), and her beau Aaron. Her lifestyle is influenced in large part by her racist and misogynistic father—as we are reminded again and again. Following his death, she begins to re-evaluate her choices and gives up her lifestyle to be with the Doctors-Without-Borders savior and overall “nice guy,” Dr. Aaron. This narrative hinges on showing what’s considered appropriate and inappropriate: The only lifestyle deemed “healthy” is one that looks straight, white, and upper middle class.

Gordon is Trainwreck’s comedic buffer—he exists to utter offensive words that make people laugh, but gets a pass because Amy is embarrassed by him—and his funeral scene is a lesson in who is this film’s intended audience. Throughout the movie, Amy visits and cares for Gordon, who hates “everyone”—but specifically Asian women, Latinos, queer folks, and Black people. He is that one really racist, really charismatic, and “tell-it-like-it-is” patriarch. Even a culturally defying film relies on a tired  Archie Bunker archetype to remind us all that white male misogynists are complicated characters deserving a backstory. 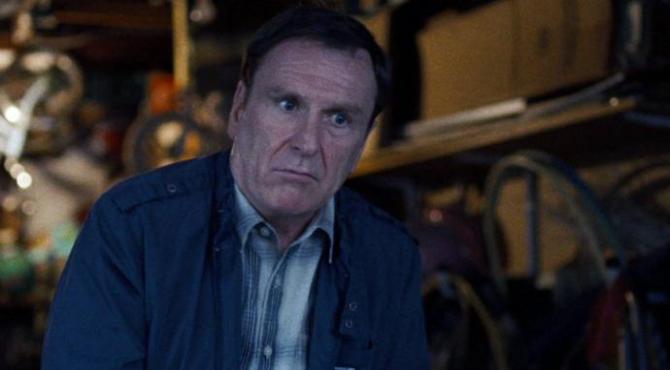 At Gordon’s funeral, all of his racist and sexist misdeeds are forgiven. After his death, Amy offers empathy to Gordon, her parallel. Amy offers us a eulogy to showcase how even a white supremacist has human qualities: “[Gordon] always made me feel loved and important.” Amy requests, “Raise your hand if he ever offended you.” The funeral attendees, people of color and white people, raise their hands, in a communal sharing of this one white man’s oppression. The experience of his racism—devoid of its material consequences—is reduced into a common struggle, and mirrors the expectations placed on people of color sitting in white audiences. This is an #AllLivesMatter moment—he offended everyone equally, so his racism doesn’t matter, right?

When I see racism, and an audience dismissing it through laughter, I think about how casual racism dehumanizes people of color. At no point were there moments when Black or Brown people could exercise agency to fight back against Amy and Gordon’s objectifications. Although he is abusive, telling his Black nurse his wound will be invaded by evil spirits, Gordon is also an outcast, an alcoholic, and drug abuser. By the end of the film, we see that Amy and her father’s problems are that they can’t find the right partner, not that they are racist. At no point did I feel people of color were recompensed for his violence; the plot focuses on the characters’ white feelings—a simulation of real life. Watching this movie in America, as a queer woman of color, feels like its own trainwreck. One that continuously hits me for each 90 minute-interval sat in a dark theater; a sandy beach of cacophonous laughter eats me inside.  The comedic quips and their laughter are filled with danger, disease, and a buildup of material consequences: white supremacy and fragility.

Still, there is so much to learn from the desires and cinematic pleasures of white people, reflecting their understanding of racist misogyny in the real world. This self-awareness is more than just my own underlying anxiety. It is a sense of urgency, a reality check, the reminder that cis, straight white people are complacent with every knee-slap celebration of Amy’s jabs and Gordon’s racism. It reminds me that I must refuse to be a guest in the master’s comedic house, where my rage is especially suppressed. If I stand up to yell at the screen, announce my fury, it would only disturb the escapist moment of consuming white media, a strategic conditioning of derailment. Trainwreck is a feminist film for this day and age—featuring the whitest couple in America—and that’s not a good thing.

Related Reading: Cutting All the White People Out of Many Hollywood Films Makes Them Under a Minute Long.

Hello, quick comment! Cena calls the man in the theater not "cocoa bean", but "Koko B. Ware". Koko was a popular (black) WWF wrestler in the 1980s and the comment plays on the allusion of Cena's day job as a WWE wrestler.