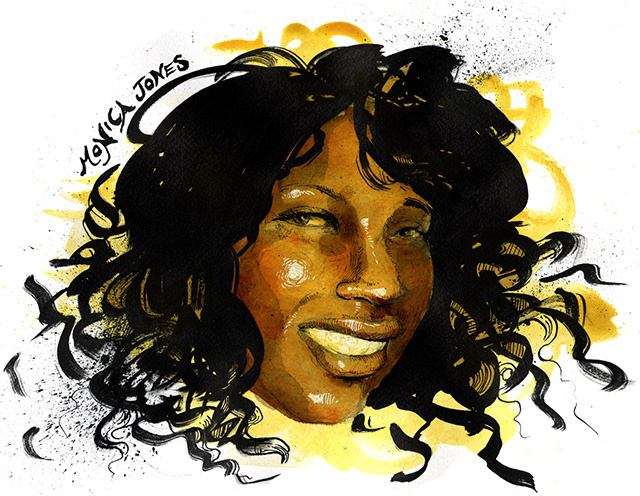 UPDATE: On April 11th, a Phoenix judge found Monica Jones guilty. She is now facing 30 days in a men’s jail, but is planning to appeal. After the conviction, she stated, “I am saddened by the injustice that took place at my trial this morning, but we are not giving up the fight. It’s time that we end the stigma and the criminalization of sex work, the profiling of trans women of color, and the racist policing system that harms so many of us.” The Sex Workers Outreach Project has these suggested ways to support her case.

Monica Jones is a sex workers’ right advocate in Phoenix, Arizona, a trans woman of color, and a social work student. On Friday, March 14th, she’ll go on trial for “manifestation of prostitution.”

Jones’s arrest and prosecution is a collision of two dicey issues: the history of “rescuing” sex workers by locking them up and the pervasive police profiling of trans women—particularly trans women of color—as assumed prostitutes.

Monica Jones is one of 350 arrests carried out by a group called Project ROSE (Reaching Out to the Sexually Exploited) since Phoenix police teamed up with the University of Arizona social work program to start the anti-prostitution initiative in 2011. Over two weekends each year, more than 100 police officers detain people whom they suspect are sex workers. Those people are then brought handcuffed to a church, where Project ROSE workers then offer them a choice: if they qualify, they can enroll in a diversion program offered by Catholic Charities. Or they can be prosecuted for prostitution-related charges and face jail time. They’re not allowed to consult with a lawyer before they decide to enroll in the program because, even though they’re in handcuffs and being threatened with prosecution, the detained individuals aren’t technically under arrest.

In 2008, Jones had been diverted to Project ROSE but was dismissed early from the program after she repeatedly challenged the program’s views that all sex workers were drug-addicted victims. “I took the diversion program and it was like the worst experience ever.  It was humiliating.  They treat you as like just a thing,” said Jones at a protest against the program outside Phoenix’s Bethany Bible Church  in May 2013.   “And like for me, I ’m proud to be a sex worker… I just needed to make money for school.”

The day after Jones spoke at the protest against Project ROSE, she was picked up on the street by undercover police officers and charged with prostitution. Because of previous prostitution convictions, she is ineligible for Project ROSE’s diversion program and faces prosecution this March 14th.

Project ROSE is a classic example of how efforts that claim to promote the welfare of women, particularly low-income women and others on the margins, serve to further criminalize them. In a piece originally written for Al-Jazeera America, investigative reporter Jordan Flaherty noted that Arizona dictates mandatory minimums and felony upgrades for sex work: People convicted for the first time serve 15 days in jail with no possibility of parole. On their fourth conviction, they’re hit an automatic felony and a minimum of 180 days in jail.

The practice of “reforming” women who have engaged in sex work has a long history. In 1869, Michigan passed the country’s first indeterminate sentencing law, allowing Detroit’s House of Correction to hold women convicted of prostitution for up to three years. A woman’s release date was based on how well she demonstrated rehabilitation after extensive “retraining” in the ways that “good women” should behave. During the latter part of the 1800s and into the early 1900s, women’s reformatories were packed with women convicted of prostitution and other actions that defied the gender norms of society at that time. In 1918, one advocate of women’s reformatories stated, “The problem of the woman offender in Illinois is not a criminal problem. It is a sex problem. Eighty-two percent of the arrests of women each year in the State of Illinois are for sex offenses.” Nearly a century later, Project ROSE continues the trajectory of criminalizing and further endangering sex workers under the guise of rescue. 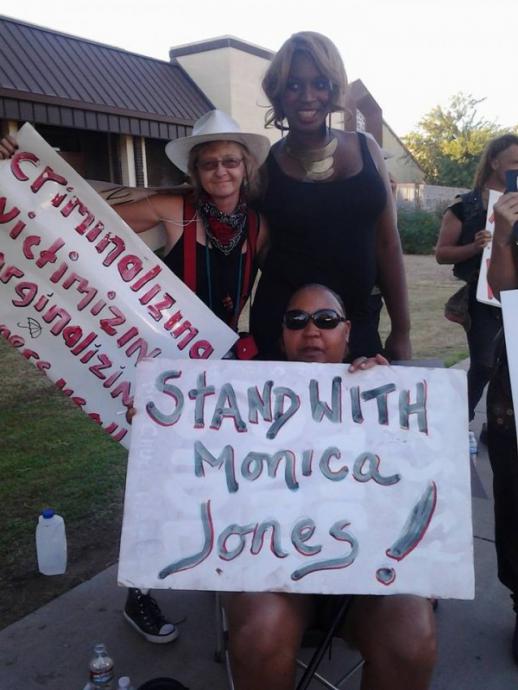 Monica Jones and supporters in Phoenix. Photo by Peggy Plews via SWOP-Phoenix.

Jones believes she landed on the radar of police officers in part because of her outspoken criticism of Project ROSE’s motivations. But she also faces increased police profiling as a trans woman of color. Trans women are particularly at risk for police entrapment and violence because of the widely held stereotype that trans women are sex workers. Trans people in New York, Washington, DC, and Los Angeles have reported being stopped by the police and searched for condoms while walking. In all three cities, police and prosecutors use condoms as evidence of prostitution. Trans women, particularly low-income and trans women of color, are more often stopped, harassed and arrested on suspicion of sex work, a phenomenon some people refer to as being arrested for “walking while trans.”

Not every organization that works with sex workers has the same criminalizing approach as Project ROSE. The Sex Workers Outreach Project (SWOP), for example, is a national network led by sex workers themselves. Recognizing that the criminalized status of sex work leaves sex workers more vulnerable to violence, local chapters organize against the institutional violence against sex workers and advocates for alternatives in their areas. SWOP-Phoenix, for instance, has spoken out against the ways in which Project ROSE perpetuates institutional violence by funneling people into the criminal justice system. It has also organized to support Monica Jones. A SWOP-supported protest on the International Day to End Violence Against Sex Workers in 2010. Photo by Steve Rhodes.

In Chicago, girls who are currently or formerly involved in the sex trade or street economies formed the Young Women’s Empowerment Project (YWEP). From 2002 until 2013, the project was led and staffed by girls ages 12 to 23 who had direct experience in the sex trade or street economy. Seeking to offer “safe, respectful, free-of-judgment spaces for girls impacted by the sex trade and street economy to recognize their hopes, dreams, and desires,” YWEP focused not on direct services but on peer support. They offered harm reduction information as well as a Bad Encounter Line, in which girls could share information on being denied help by social services agencies, doctors offices, the police and other institutions. Although the project closed in fall 2013, several of its programs, including its weekly meeting for youth in the sex trade and Street Youth Rise Up campaign to change the ways Chicago’s street youth are treated, continue in other venues. 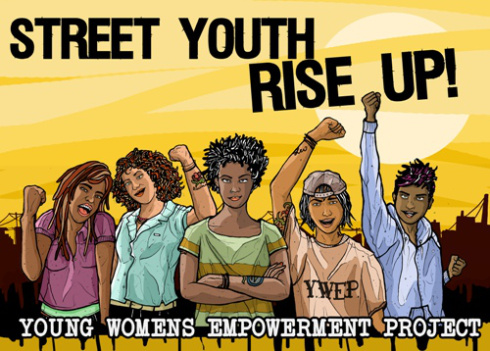 In the Bay Area, sex workers created St. James Infirmary, a free, confidential and nonjudgmental occupational safety and health clinic. Since its opening in 1999, the infirmary has provided medical care, including acupuncture, acupressure, reiki and massage, as well as syringes, condoms, and hormones, to over 3000 sex workers. It also provides in-depth trainings on health and harm reduction approaches to social services and medical providers.

As Monica Jones’s case heads to trial on Friday, members of SWOP Phoenix and the Best Practices Policy Project will be at the United Nations in Geneva to bring international attention to Jones’s trial as well as the ongoing prosecution of sex workers in Phoenix and across the United States.

In its Bad Encounter Hotline, YWEP coordinators stated, “Social justice for girls and young women in the sex trade means having the power to make all of the decisions about our own bodies and lives without policing, punishment, or violence.” Instead of partnering with police to detain and “save” sex workers (while pushing them into the criminal justice system), organizations that really care about people in the sex trade should work with them to find out what their needs are and how to best support their efforts in meeting them.