The Rise of Bro-Country | Bitch Media

The Rise of Bro-Country

Florida Georgia Line has the best-selling digital country song of all time, “Cruise,” which is about approaching an attractive lady and asking her to ride in their truck.

Love it or hate it, country music has recently displaced Top 40 as America’s most popular radio genre. Country has often been associated with middle-aged suburban folks, but over the past decade or so the genre has started attracting a much younger and broader demographic of listeners. Along the way, we’ve seen the rise of bro-country.

Bro-country refers to a recent subgenre of country music that is dominated by men who sing catchy hip-hop influenced pop-country anthems about light-hearted subjects like Friday nights, girls in jeans, beer, and trucks. If you’ve only started hearing country songs on the radio in the past few years, you might think this is what country’s always been about. But in past decades, male artists like George Strait and Conway Twitty often wrote original love songs and female empowerment anthems like “Let Herself Go,” while women like Reba McEntire, Sheryl Crow, Shania Twain, Martina McBride, and Dolly Parton dominated the charts with songs about womanhood.

These days, country’s popular artists are guys include Luke Bryan, Jason Aldean, Thomas Rhett, and Florida Georgia Line. The songs are so formulaic that they sound nearly identical—a point one YouTuber recently made by mixing six top current country hits into one surprisingly fluid song:

What frustrating’s about bro-country beyond the fact that the genre’s lyrics pigeonhole ladies is the way these cheesy male musicians have pushed female artists off the top of the charts. When you look at Billboard’s top country music chart right now, only one solo woman artist has a top-20 song: Miranda Lambert. That reflects the trend from last year: only two women made the list of the 20 best-selling artists in 2014. There is a rich history of both female and overtly feminist country musicians. But much to my chagrin, bro-country defines the sound of country music today.

While there is nothing wrong with light-hearted music, the reductive portrayals of women in bro-country songs are frustrating, especially as the genre is reaching a wider and younger audience. Just to name one example out of many, Luke Bryan’s 2011 hit “Country Girl (Shake It For Me)” encourages women to “get up on the hood of my daddy’s tractor” and “shake it for the young bucks sittin’ in the honky tonks.”

Recently, female country artists have taken it upon themselves to mock the popularity of bro-country. Kacey Musgraves had a hit in 2013 with her empowerment song “Follow Your Arrow” and teenage duo Maddie & Tae offered a feminist response to bro-country last year with their first single, “Girl in a Country Song.” In the song, the pair ridicule the lyrics of artists like Blake Shelton, Thomas Rhett, Luke Bryan, Jake Owen, Jason Aldean, and Tyler Farr by imagining what it would be like if the girls (or women) in these bro-country hits. They offer up these on-point lyrics about the way girls in bro-country anthems might feel:

“Well, I wish I had some shoes on my two bare feet
And it’s gettin’ kinda cold in these painted on cut-off jeans
I hate the way this bikini top chafes
Do I really have to wear it all day?” 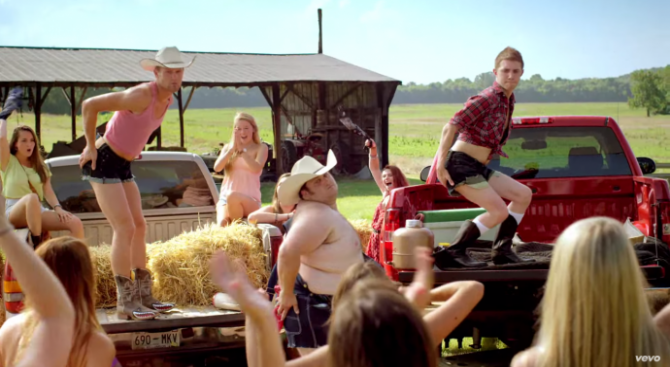 Maddie and Tae’s “Girl in a Country Song” spoofs the representation of women in bro-country.

In a similar fashion a few years ago, Nashville musicians Rayna James and Juliette Barnes (portrayed by Connie Britton and Hayden Panettiere) released a feminist response to the tropes of country music in a song titled “Wrong Song.” This duet is addressed to a cheating lover and focuses on the theme of women supporting men. It as well references the classic Tammy Wynnette song “Stand by Your Man” when the duo sings:

“If you’re looking for one more chance,

a little stand by your man,

you’ve got the wrong song …

Female artists like Miranda Lambert, Carrie Underwood, Ashley Monroe, Maddie & Tae, and the Pistol Annies, all use their music as an avenue through which to display feminine strength and offer smart and strong reflections on womanhood.

Miranda Lambert’s latest album, Platinum, offers these types of reflections. In the song “Gravity is a Bitch” she sings about aging as a woman. In “Bathroom Sink,” she uses makeup as a metaphor for escaping reality: “Puttin’ on my makeup, puttin’ off the hard stuff, hopin’ that it passes, fake smile and eyelashes.” Lambert is country’s best-selling female artist right now and what really highlights her lack of female peers is that she has won Female Vocalist of the Year at the Country Music Association Awards every year for the past five years. She has also had all of her five albums debut at number one on the country music charts and at last year’s CMA’s she won both best album and best single of the year. It’s great that she’s getting respect and recognition, but it would be great if there were more women selling millions of country albums, too.

Songs about female strength and the real lives of women were often top country hits—until recently. Dolly Parton sang dozens of feminist anthems through the 60s, 70s, and 80s, from “Just Because I’m A Woman” in 1968 to “9 to 5” in 1980. In 2005, Reba McEntire released “I’m A Survivor,” where she sang about overcoming obstacles with lyrics like “when the deck is stacked against me I just play a different game,” and Martina McBride has been releasing songs about being a woman and a mother since 1992’s “Independence Day,” where she sang about domestic abuse and won a CMA for song of the year. And, of course, there’s the Dixie Chicks—they’ve won 13 Grammys and sold 30 million albums, but they haven’t released a new one since 2007.

I’m hoping that top-charting feminist country music isn’t just part of history, but part of the future. These days, the landscape of country music has changed and today it’s become very difficult for women to break into the best-selling ranks. But, personally, this country fan is hoping that just as the trend of bro-country has appeared, it will soon fade away into the sunset.

by Katie Presley
Each week during March, we're highlighting the best feminist music showcased during the annual South by Southwest music festival in Austin, Texas.