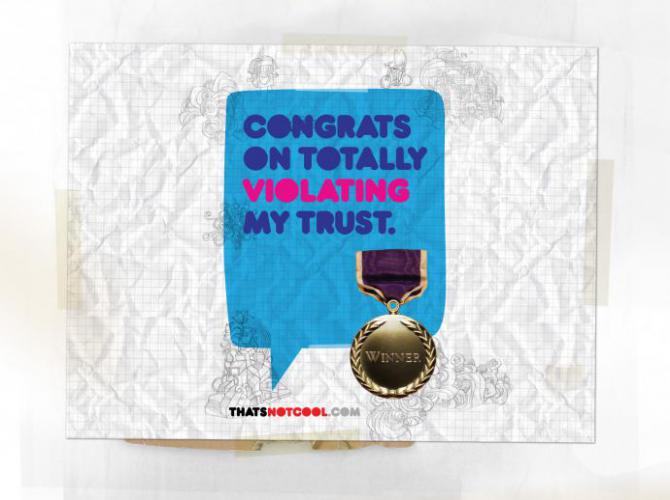 The site ThatsNotCool.com offers “callout cards” to send to people who cross your digital boundaries.

A more troubling problem in the laws, according to victims’ advocates and prosecutors, are the “emotional distress” clauses commonly found in them. These clauses require prosecutors to prove that people sharing images did so with the intent to harm the person in the photos. A defendant, hoping to sow doubt around this issue, could claim instead they posted the images for “profit” or “fun.” Such clauses make convictions more difficult, which advocates fear may lead prosecutors not to pursue such cases. A remedy for this can be seen in the law passed last month by Illinois, which discounts motive on the part of people sharing images. Instead, it makes the sharing of images in itself criminal. It, likewise, does not require that the images be nudes, only that they be sexual in nature.

If victims do have the enormous resources required to go through the legal process and win, the perpetrator may be fined or sent to jail. That’s not a long-term solution for what’s clearly a widespread problem. In addition to looking at legal avenues for justice, we need to see a culture change around digital privacy. Far too often, women whose photos are misused are blamed for sharing their photos in the first place. News stories often pin blame on the people—especially young people—who send sexy photos to people they think they can trust, painting these actions as short-sighted and risky. Really, this is an issue of consent. The blame for nonconsensually posting private photos falls squarely on the shoulders of the people who post them without permission. Reforming this problem will take more than legal action, it will require a cultural shift to recognize the necessity of consent.

Short-sightedness in US and Australian law making is all too common, and the "emotional distress" clause is definitely one of those things. Good work to Germany and the UK