The Surprising Language of “Dawn of the Planet of the Apes” 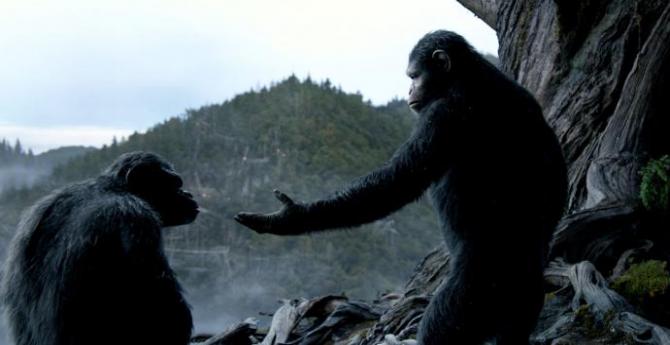 In “Dawn of the Planet of the Apes,” gestures and body language communicate more than spoken words.

There are some movies you see because you actively seek them out, and some you see because just giving up and buying a ticket seems easier than resisting the tidal forces that conspire to pull you into the box office. It was in this latter spirit that I saw Dawn of the Planet of the Apes: my friend and I had missed the showtime for the movie we wanted to see, and found nothing but apes for the rest of the afternoon. In the evening, they would be joined by the other stories of summer—the robots, the planes, the cops, the witch, the aliens, and the dragons—but that afternoon, as the movie suggested they would in the not-so-distant future, the apes reigned supreme.

As we filed in, I found myself trying to calculate just where Dawn of the Planet of the Apes fell in its franchise’s lineage. Without recalling exactly how many other movies, specials, TV series episodes, tie-in books, and collectible pieces of licensed merchandise had gone before it, I could remember that this movie was the sequel to a prequel to a remake of a 1968 film that itself begat a highly successful series of the time. The question most present in my mind, then, was whether a movie whose ideas must by now be so thoroughly chewed-over could somehow be interesting, or even good. The answer shocked me in more ways than one.

Dawn of the Planet of the Apes begins where Rise of the Planet of the Apes ended, tracking the spread of the “ape flu” scientists inadvertently developed alongside a drug that increased ape intelligence to its current levels. Now, human societies have crumbled, with a few stalwart encampments assembling in the wreckage, living at subsistence level and yearning to return to their more civilized past. The viewer’s point of entry, however, is not with the humans, but with the apes who were freed from their testing facility at the end of the last movie, and now live in a peaceable encampment in Northern California’s Muir Woods. They are led by Caesar (Andy Serkis), and though they make war with other groups of apes, they strive to avoid violence and conflict. The apes are determined not to repeat man’s mistakes, and ape society is primarily different from human society, Caesar says, because of its cardinal rule: “ape does not kill ape.”

This line is one of the most powerful in the movie’s opening, but we don’t hear it. In the first reel—before the humans inevitably make contact, and the strife that will soon escalate into the all-out warfare can begin—we don’t hear much spoken language at all. The apes communicate with each other almost entirely through signing, and though we are given to understand early on that they can verbalize, it seems uncomfortable and counterintuitive to them. When they do resort to spoken language, their sentences are dramatically simplified, sometimes to the point of broken English; when they communicate with each other by signing, they are expressive in all the ways that speech makes seem flat and simple. 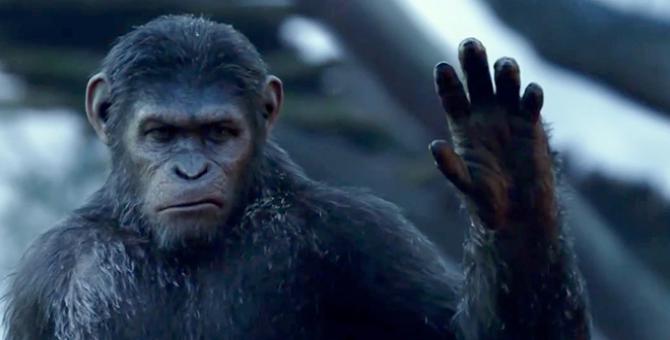 I believe this is ape sign language for, “Hello, apes!”

We hear the apes speak in their first contact with humans, and it only takes a single word to usher in a new degree of tension between the groups, and a new mode of communication for the movie. Trying to force a group of humans out of their home—after one of the humans has already resorted to violence and shot an ape at point-blank range—Caesar, realizing nonverbal communication will not be enough, uses one word: “Go!”  The humans’ leader, Malcolm (Jason Clarke), is ecstatic: the apes can talk! They must be intelligent. Humans can speak with them, and therefore reason with them as well.

As the movie progresses, apes, especially Caesar, begin to talk to humans. But they also begin to talk to other apes. As tensions progress to warfare and ape society splinters into violently discordant factions, apes debate, reassure, and castigate each other in spoken English, though their facility with it never really improves. Did the filmmakers believe that viewers would not just want but require the ape characters to become verbal in order to see them as fully developed characters? Or did they think viewers would be more comfortable watching a movie unfold in a mode of communication that inherently privileged one side—the human side—above another?

Watching Dawn of the Planet of the Apes, I found myself first pleasantly surprised, then amazed, and finally disappointed. In a category of movies whose heroes seemed destined to adhere to tired archetypes, I felt I was finally encountering a character I’d long ago given up on finding: a caring, empathetic protagonist, motivated not by pride or anger but by a deep desire to protect his people, and to keep harm from befalling even those he saw as enemies. That the protagonist in question was a computer-animated chimpanzee hardly seemed to matter. Masculinity in American blockbusters is now so highly codified—and so yoked to muscular bodies, violent temperaments, powerful weapons, and expensive toys—that perhaps we had to go beyond the human male in order to find a character we could gift with all the dignity and complexity a hero should be capable of.

In giving audiences the opportunity to relate to a non-human protagonist, the filmmakers have given us more credit than we often get—yet in developing the apes’ characters by forcing them out of their nonverbal world and onto the human terrain of spoken language, they haven’t given us quite enough. In its largely wordless opening minutes, Dawn so compellingly draws us into ape society by heightening our awareness of gestures, expressions, and signs; without the razzmatazz of quips and explosives we have become so accustomed to, we are forced to observe closely, to pay attention to what we do understand, and to reflect on all we take in. Once the apes make contact with humans, the pace of a more typical action movie arrives. The apes’ quick adoption of spoken language, evidently meant to make them more compelling and comprehensible to us, largely serves to distance us from them. 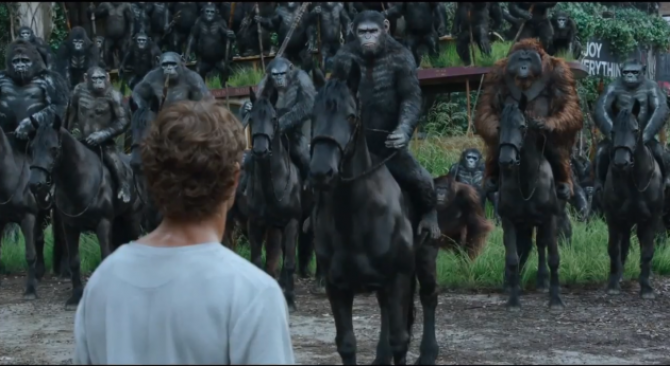 Those are some bad news apes.

Watching Dawn of the Planet of the Apes, I was surprised to find myself reminded not of summer blockbusters past, but of the failures of communication we often encounter in own lives—and of our ongoing debate over which forms of communication can be somehow seen as superior to others, or even deserve to qualify as such. As Caesar and other characters’ signing disappeared in favor of spoken English, I thought of the deep rift between Deaf and hearing cultures, and the assumption hearing individuals often make about the deaf: if you could hear, you would want to, and if you can use spoken English, you should. Yet hearing individuals’ lack of awareness that deafness can be not just a disability but an identity—not just deafness, but Deafness—may spring from anxiety as much as it does from ignorance: if the hearing, sighted, and able-bodied do not possess the only legitimate experience of the world, and if being “normal” does not equate with being right, then one must suddenly view others’ experiences as not just tragic or courageous, but valid. And if the film’s grim conclusion demonstrates anything (beyond a perennial need for more sequels, that is), it’s that the means of communication we adopt can matter just as much as their content.

Dawn’s fictional apes are as intelligent as their human counterparts, but even the films’ most enlightened humans regard them as equals not when they begin to have ideas as complex as theirs, but to express them the same way: through spoken language. None of the human characters make any attempt to learn how to sign, and one wonders how much more happily the story could have ended if the humans had not been so adamant in holding up their mode of communication as the norm. Ape diplomacy may be an issue we never encounter, but the question of how to best communicate across language and cultural lines is now more present than our lives than ever. Often, communication—the kind that can inspire thoughtfulness, connection, and lasting empathy—comes not from a facility with shared language, but from a willingness to make oneself vulnerable by giving up fluency in order to accommodate someone else. And sometimes, one must be unfamiliar with a language in order to be quiet for as long as it takes to listen.

Related Reading: ‘Tis the Season of Macho Summer Blockbusters, With No Superheroines in Sight.

Sarah Marshall’s writing has most recently appeared in The Believer, Lapham’s Quarterly, and The New Republic, and she is currently at work on a book about true crime narratives in popular culture.

There are some really nice points in this review! I only know the 68 film and 'rise', and wasn't planning on watching this one. Wih the original in mind, could it be that the use of language is also a sign of decline? As in, we know the apes eventually end up with some of the less favourable 'human' qualities and adopting human speech is the first step away from their own high goals? In that case, the dominance of speech later on in the film might have its place. (As I said, I don't know it and it's just a thought)
Peace!

I think the most poorly thought out element of this movie was not that humans never tried to learn the ape sign language, but that in two civilizations, looking some hundred years in the future, all the active agents were dudes. Dudes everywhere, except for one woman who, shock horror, provided the health and nurturing required to keep the heroes alive. It was bizarre, disappointing and distracting. The sexism and gendered roles was what made the movie so unrealistic for me - despite the amazing CGI.

Mostly I don't get involved in petty online arguments, but I'll make one small exception to the person below who calls the movie's supposed sexism "unrealistic." Feminism can go too far.

This is a post-apocalyptic world where everyone carries a gun and hunting is a prerequisite to eating. It's nice to fantasize about femme fatales who can dispatch small gangs of Russian strongmen with quick, acrobatic movements, but in the real world, when the going gets tough, only the strong survive. It's not a tiny bit "unrealistic" that human society reverted to a totally reasonable social order where women are respected, but provide the necessary medical services to their men and children, who in turn protect their girls and provide them with food and a little thing called "not getting ripped apart by wild animals because he's a better shot with the rifle." 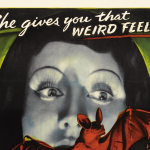