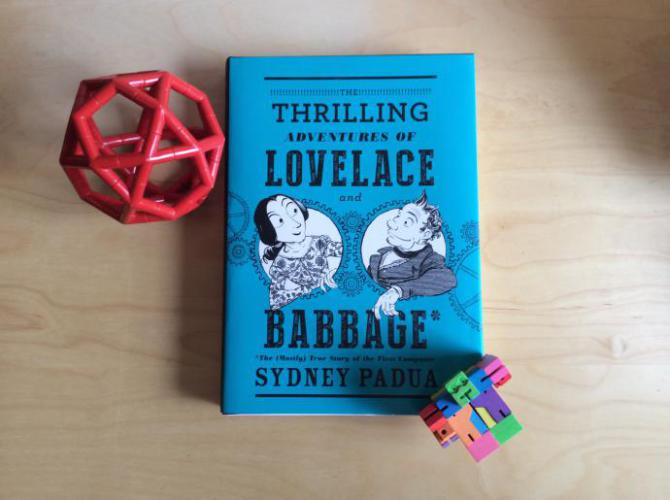 Ada Lovelace was a brilliant mathematician. Her mind raced with big ideas on abstract mathematics—in 1843, she wrote what historians regard as the first paper on computer science. Sadly, it was her only paper: She died at age 36, 100 years before the first computers were built. But what if she’d lived longer? And what if she and equally imaginative mathematical theorist Charles Babbage had built the steam-powered computer of their dreams?

That’s the premise for The Thrilling Adventures of Lovelace and Babbage, a wonderfully illustrated and impressively researched graphic novel by artist and writer Sydney Padua that came out from Pantheon Books this April. Thrilling Adventures starts off as nonfiction, relating the life stories of Lovelace and Babbage as they grappled with their wild ideas and the constraints of the Victorian Age. In lively black and white panels that clearly bear the imprint of Padua’s work as an animator, the scientists scheme together about building a giant calculating machine they called the “analytical engine.” But after 15 pages, their lives come to an end, sadly leaving the great machine unbuilt. That’s when Thrilling Adventures changes gears. “But wait!” writes Padua. “That ending to the story of Lovelace and Babbage is but ONE of the infinite array of possible outcomes occurring on the more boring worlds that are part of the multiverse!” For the next 300 pages, the hefty graphic novel follows fictional exploits of our heroes, decked out in steampunk regalia, as they use their charming wits and math skills to solve crimes and help out 19th century notables. In this far superior fictional universe, the duo does daring favors for Queen Elizabeth and crosses paths with literary types like Thomas Carlyle. 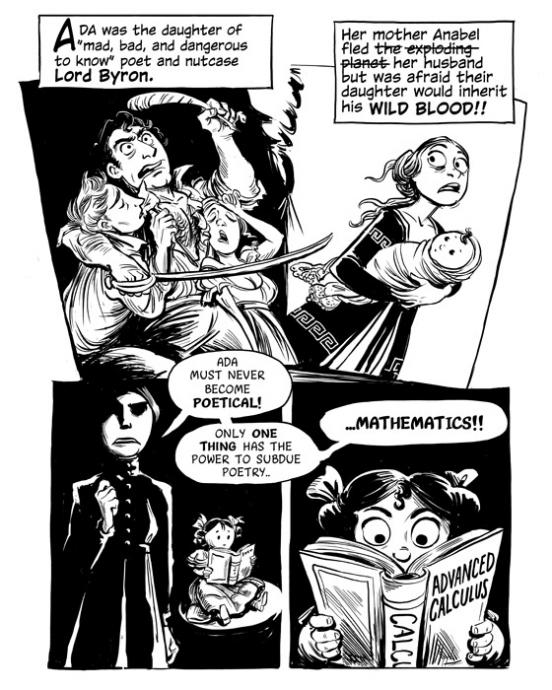 The first page of Ada Lovelace’s origin story, as drawn by Sydney Padua.

Padua started Thrilling Adventures as a webcomic she doodled as a way to procrastinate. The finished collection strikes a similar tone to fellow history-loving webcomic-turned-book Hark a Vagrant—like Kate Beaton, Padua plays around with beloved historical and literary figures. It should also find adjacent shelf-space to Jim Ottaviani’s Dignifying Science, which collects well-told nonfiction biographies of female scientists. Like both those books, Thrilling Adventures is built on serious research. Each page of the comic features extensive and entertaining footnotes that dish out weird biographical details, clear up what’s fiction and what’s real, and explain some of the science at the basis of Lovelace and Babbage’s imagined adventures. For readers who want to learn even more, Padua wrote extensive endnotes at the end of each chapter. These make the comic good study material for people looking to learn more about early computer science and the bizarre, grandiose characters who pushed mathematics forward (and sometimes in circles) in the 1800s.

In addition to being rather educational, Padua’s comics are dang funny. In a better world in the multiverse, her comics are no doubt required reading for high school science classes.