Whenever someone starts talking about “crip-drag” - the slang term that basically means “currently non-disabled actor playing a disabled character” - the conversation tends to eventually (usually sooner, rather than later) turns to this:

But but but! We shouldn’t accept a less-than-stellar actor just because they’re disabled. That’s, like, Affirmative Action GONE MAD!!!!!! No, you just have to accept that they always, totally, without fail, and without any influence by ablism or assumptions about what stories they can tell about disabilities, the casting directors chose the best person for the job. And it’s just a wild coincidence that the best person for the job is almost always someone who doesn’t have a disability.

You may think I’m exaggerating, but, as Wheelie Catholic wrote a few short weeks ago when talking about the Washington Post poll about Glee:

The readers’ choices in the poll are about whether Glee should be given a “pass” for not having hired a disabled actor. The Yes answer reads that hiring someone with a disability would have “sent a vital message and signaled support for the disability community”

Wow. How touchy feely. How- charity-model-like.

The No answer reads : It’s more important that the role be so expertly played that nobody even stops to wonder about whether the actor who plays it uses a wheelchair in real life.

Notice, however, how the answer “No” builds in the assumption (yet again) that there isn’t a disabled actor who could play it so expertly. It implies sacrificing a quality in the performance if a disabled actor was hired. There’s also this “one of us” implication in there about no one stopping to wonder whether the actor who plays it really uses a wheelchair in real life.

On the other hand, the ‘Yes’ answer implies that hiring a disabled actor would be just for politically correct reasons.

I don’t feel like having another discussion about Glee (ever, in my whole entire life, seriously), but I keep coming back to this assumption: that obviously there’s nothing else going on here but the wild coincidence that all currently non-disabled actors will always be better than all actors with disabilities.

I think this assumption is partly based on how rarely the work of actors, writers, and creators with disabilities are highlighted or even brought to the attention of the “general” population. Inspired in part by an early comment on one of the posts by the Transcontinetal Disability Choir, I want to highlight some of the artistic endeavours by people with disabilities that are available ‘round the internets. 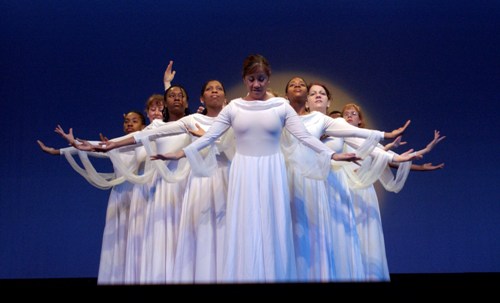 Gallaudet University is “the world’s only accredited liberal arts university for deaf and hard of hearing students”. Yes, they have a dance troupe that looks a lot like a Show Choir, and if you check out the video on their site (I’m not able to embed it) you can check out what an excellent Deaf Dance Troupe performing with Sign Language looks like. The video is about 7 1/2 minutes long, and I really can’t recommend it enough.

And, the best thing I’ve seen on the internet this week, Single Ladies performed by Deaf women. It is also subtitled:

[Same video, but focusing a lot more on the Signs being used.]

Flame is a band from upstate New York made up of people with developmental and physical disabilities.

…including autism, Down’s syndrome, mental retardation and blindness, is capturing the world’s attention but their message remains the same. The band from Lexington Center, Fulton County Chapter, NYSARC, Inc., wants to change the world through music. They are a phenomenon that inspires people and changes the way the general public view people with disabilities.

In the UK, Heavy Load is a band “made up of musicians with and without learning disabilities.”

Over the last 10 years they have managed to survive through their combination of raucous energy, attitude and sheer volume but now they are about to hit the big time with a feature length documentary being made about their journey from social care to stardom, and back again, and their mission to demonstrate that disability rocks.

Susan Harrington is just one of the members of How’s Your News, a “traveling documentary news show which features a team of reporters with various disabilities.” [Transcript]

Meet Susan Harrington from How’s Your News? on Vimeo.

And, of course, my personal favourite: Wheelchair Dancing!

Ballroom Dancing! I can’t actually sort out what song they’re dancing to, and I will warn for LOUD!

Wheelchair Dancer is an outstanding blogger who writes about her experiences as a wheelchair dancer with an integrated troupe.

Of course, there’s also the wide variety of written works created by people with disabilities. Elizabeth Kate Switaj, who is on the autism spectrum, is a poet. Miss Crip Chick is also a poet, an activist, an amazing. Mari Ness wrote one of my favourite short stories after a stint in the Mayo Clinic, although others prefer this bit of other-ness.

Why are so many people unaware of the art created by people with disabilities? It’s like there’s some sort of system of oppression at work that keeps the general population ignorant….

It never ceases to amaze me how deeply entrenched in ableism our culture absolutely is. Though I've been a feminist and critic of white privilege from the time I could toddle, I'm still grappling with understanding my role in the confrontation of ableist privilege and doing my part to dismantle it accordingly. In fact, the kind of awareness that entails made me look at "Avatar" with a pretty critical lens. One thing the floored me is, while many blogs were talking about the racism and sexism portrayed in the film, few, if any, felt it necessary to comment on the message "Avatar" is sending to the so-called "disabled" community (for more on that particular rant, feel free to check out this link: http://globalshift.org/2009/12/dances-with-discrimination-on-avatar-raci...).

Much like your earlier commentary on "The Glass Menagerie," it's easy to be distracted from the more problematic message to instead focus on what makes the play so timeless. It's Tennessee Williams! It's a poignant story of accepting the curves life throws at you! Never mind that the play, perhaps unintentionally, seeks to re-enforce any number of stereotypes we have constructed about the disabled versus the non-disabled. In fact, I'm ashamed that my jaw dropped in amazement at the idea of dance troupes that sport individuals in wheelchairs. Of <i>course</i> they can have dance troops for wheelchairs alone, and shame on me for being so cynical and entitled in my ableist privilege!

I also think the discussions of "Glee," though perhaps a bit tired, are likely to continue. To me, the idea of a non-disabled actor playing a disabled character can be as simple as a non-pregnant actress playing as though she is pregnant, or as offensive as casting men in blackface two centuries ago. On the other hand, we ask actors to inhabit roles of religion and sexual orientation opposite their own (remember Tom Hanks' turn in "Philadelphia"?) and one could argue it's a burden of pretending for a living. On the other hand, disability is one of the youngest social consciousness movements, and one of the least advocated for in terms of Hollywood--perhaps it requires more of a hand-up due to the sheer, sweeping denial that ableism is anything other than casual language poorly interpreted.

Actually, that was my post on the Glass Menagerie.

There are two Annas. I understand if that is confusing!

Although it may need more of a hand-up due to youth, as a social movement, and sweeping denial, I, personally, choose not to use that argument because it feels like yet more "worthy cause" thinking.

I prefer this tack: if you get actual performers with the actual disabilities they're <i>portraying</i>, then there can be more (ahem as in "any") feedback with the writers who make the scripts: "You know, that's really more insulting than endearing..." or "Here's a funny (or awkward, or tender, or...) wrinkle that having this disability in this situation would bring up."

And maybe, just maybe, we could have a wider variety of stories about disability to talk about, rather than the same-old "It's a tragedy unless we <i>cure</i> it" trope. And we'd get better art.