The Transcontinental Disability Choir: Pleased To Meet You! | Bitch Media

The Transcontinental Disability Choir: Pleased To Meet You!

We're FWD (Feminists With Disabilities), and we're excited to be guest blogging at Bitch, bringing discussions about the intersection between disability and feminism to a larger audience. Over the next eight weeks, we'll be talking about the depiction of disability in pop culture, how society relates to people with disabilities, and, of course, why disability activism should matter to feminists.

I'm s.e. smith, and my cobloggers are Lauredhel, Annaham, Anna, abby jean, and Ouyang Dan. You'll be hearing more from all of us in the coming weeks, and if you get a jonesing for more disability and feminism, you can always check out FWD/Forward, a blog to which we contribute.

There are numerous competing definitions for "disability" which sometimes seem to shift more quickly than we can keep up with them. Disability could be termed a physical or mental impairment which interferes with social or personal function. People with disabilities may experience difficulty performing daily tasks, have trouble with interpersonal friendships and interactions, experience mobility impairments, have difficulty performing self care, struggle with knowledge acquisition, and experience other barriers presented by variations in the function or structure of the body and mind.

Many people think of the classic symbol of a person in a wheelchair when they hear "disability," but disability is actually an extremely diverse spectrum. People who self-identify as disabled experience a complicated mixture of social pressures, political ones, and identification by others. People with disabilities also lack privilege as a result of living in marginalized bodies, and experience ableism, a form of discrimination centered on people with disabilities.

Several different models are used to talk about disability. We will be getting into discussions of these models and their benefits and drawbacks later, but, briefly, the two dominant models are the medical and social models. The medical model of disability focuses on how impairments impact individuals; "disability" is defined by specific impairments which can be diagnosed and managed, with a focus on treatment and, to some extent, normalization. The social model states that people with disabilities are disabled by the society they live in.

To delve into why disability matters, it may help to share a few statistics, courtesy of the United States Census. While these figures are for the United States, figures in many other nations are similar. Roughly 20% of the American population is identified as disabled, with the rate of disability being slightly higher among women (20%) than among men (17%). Disability is more common among some demographic groups than others. 80% of people 72 and older are disabled, for example, and among the Native American and First Nations population, the rate is 26%, higher than that seen in the population as a whole. The level of disability varies widely among these individuals; all told, around four percent of people in the United States over the age of six require some form of assistance with daily tasks as a result of their disabilities.

People with disabilities are also more likely to experience violence and sexual assault, with some estimates suggesting, for example, that women with disabilities are twice as likely to be sexually assaulted when compared to able bodied women. Issues such as access to education, wages, and the experience of violence have long been considered feminist issues, and their disproportionate impact on the disabled community should be a cause for concern among feminists.

The way in which our society views and handles disability is reflected in pop culture, which is why we're here, talking about disability. From a wheelchair user utilized as a prop on the hit series "Glee" to the depiction of disability in Lady Gaga's video "Paparazzi," we see and absorb messages about disability on a daily basis through the media which we consume.

Despite the fact that the representation of people with disabilities in film, television, music, and other media is much lower than the representation of people with disabilities in the actual population, pop culture still manages to make time to reinforce ableist messages, which is one of the things we will be examining in the coming weeks. Pop culture sometimes manages to get things right, which is also something we will be discussing.

I'm really excited to see the FWD/Forward folk on <i>Bitch</i>! It's good to see y'all finding ways to expand your audience even further, and I look forward to seeing what you write about on here.

You even moved me to commenting! I didn't even do that for Sady Doyle, whose work I love.

aw yea!! fantastic to hear yall will be guestblogging here.

"“Person with disabilities” is an example of what is known as “person first language,” which tends to be preferred by disability activists in North America. “Disabled person,” seen more commonly in the United Kingdom, is a reflection of the social model of disability."

Huh, had not realized this (re UK and what that distinction signifies culturally).

Yes, the language debate actually gets quite heated at times; in the UK, "person with disabilities" is viewed as extremely offensive by some disability rights activists because they are very committed to the social model and the idea that people are disabled by society, rather than specific impairments. (For example, FWD caught some flak over our name from folks in the UK.) I have a feeling that Anna will be getting into this in more detail since she knows a lot about the history behind this particular linguistic split.

Amazing! Thank you SO MUCH for addressing this. This (among many other issues) NEVER get addressed in the feminist community. Ya'll are awesome and I support you in any way I can.

<em>“Person with disabilities” is an example of what is known as “person first language,” which tends to be preferred by disability activists in North America. “Disabled person,” seen more commonly in the United Kingdom, is a reflection of the social model of disability.</em>

Phrases like "people with disabilities" have been in common use in the UK for years. At my college (Aberystwyth), the disabilities campaign was entitled "students with disabilities" or SWD, and the union officer concerned was called the "Students with Disabilities Officer". The same was true in other colleges as <a href="http://www.newstatesman.com/blogs/crips-column/2007/11/disabled-disabili... Brignell confirms</a> (she was at Cambridge).

In the late 1990s, the executive tried to change SWD to "students with different abilities", which was rejected by the general meeting. The people involved (some modernisers in league with some hired management consultants) thought their name sounded nicer; I, along with the SWD officer (who is hearing-impaired), thought the name had to be unambiguous to show students where they needed to go for support. He also said that the officer concerned didn't know what it was like to be disabled.

Also, some objection to PFL comes from the USA. The NFB passed a motion rejecting it in the early 1990s, remaining the National Federation of <em>the Blind</em>. "People who are blind" doesn't seem to be used much over here, but I have heard blind people say they really hate the expression "the blind", preferring "blind people", and the RNIB recently changed its name to the "Royal National Institute of Blind people", as you can hear any time you take a tube through Kings Cross station.

I'm so glad to see you all guest blogging here, I wouldn't have found FWD otherwise. There isn't enough informed and detailed discussion of the representation of disabled people in popular culture and this will hopefully stimulate lots of thinking within the Bitch community.

I have to ask... why only eight weeks?

"I would maybe marry a dude with a cleft palate and a stutter if he is supportive"..." I'll date a dude who's practically handicapped."

Why exactly would someone consider this funny? This article clearly advocates such statements and is not satire. Let me guess, the author has a friend with X, which gives her the right to say Y....

This UCLA student had (has?) Asian friends...
http://www.youtube.com/watch?v=Johj5WEYzZo

Relevant: Will the Real Kylie Jenner Please Stand Up? 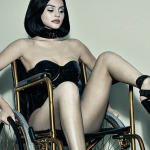 by M. Sabine Rear
The reality TV show star posed with a golden wheelchair on the cover of "Interview" magazine.