“The Trials of Spring” Shows the Struggles of Egyptian Women Protesters 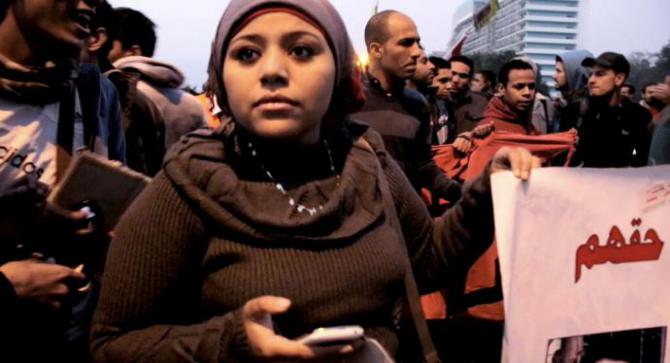 Hend Nafea at a protest in Egypt, before she was arrested and beaten by military police.

In early February of this year, 24-year-old Egyptian Hend Nafea posted a picture of her bruised face and bandaged head to Facebook.

“This photo is a gift to Judge Mohammed Naji Shehata,” she wrote in the caption, “who today sentenced me and 229 others to life in prison for attending a protest for ‘Life, Freedom, Justice, and Society.’ Instead of convicting the officers who stripped me, exposed me, assaulted me, he sentences me to life!”

The photo was taken in 2011, when Nafea was hospitalized after an encounter with Egyptian officers at a protest against military rule. Nafea had been arrested, undressed, and then beaten by the officers. Her story is highlighted in a new documentary called The Trials of Spring, which documents the role of Egyptian women in the 2011 uprising. The film, which debuted at the Human Rights Watch Film Festival this past weekend in New York, chronicles the moments leading up to Nafea’s trial, where she was sentenced to life in prison in absentia. It also collects accounts from Khadiga Hennawi, known as “The Mother of Tahrir” by her fellow protesters, and Mariam Kirollos, who founded Operation Anti-Sexual Harassment/Assault, a group that assists female protesters against sexual violence. 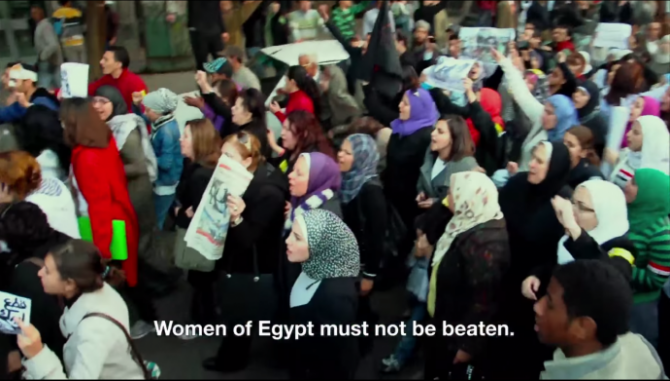 At protests shown in The Trials of Spring, thousands of Egyptian women took to the streets to call for an end to sexual abuse and harassment.

Those who followed the events of the Egyptian revolution when they happened may remember that women’s stories were prominent in the local and international press. There was 26-year-old Asmaa Mahfouz, who rallied thousands of people with her impassioned video plea to rise up. There was the anonymous “Woman of All Women” who was dragged across the street by military officers, her abaya pulling up over her head, exposing her blue bra to the world. And there were women like Samira Ibrahim, who was subjected to the violence military-administered “virginity tests” and lodged a lawsuit against the perpetrators.

What becomes apparent from these stories, and from The Trials of Spring, is that the violation of women’s bodies is one of the state’s most effective means of neutralizing revolutionary power. It’s significant, then, that the Egyptian military became notorious for a particular brand of sexual violence, one that took place both under the guise of bureaucratic process—like the virginity tests—and in Tahrir Square, on an informal battlefield. When Nafea describes her assault at the hands of military officers, she says they beat her and hit her on the head with a baton. But first, they stripped her body. “The first thing they do is strip a girl of her veil,” she says in The Trials of Spring.

These stories galvanized worldwide attention and rallied support for the young revolutionaries on the ground in Tahrir Square. But there was a tendency, particularly of the Western media, to ascribe these transgressions to a matter of cultural, or religious, deficiencies. And as the Muslim Brotherhood came to power, these apprehensions became heightened to a fever pitch. The Muslim Brotherhood, for all its faults and weaknesses, became a convenient bogeyman. Even Hennawi, who is by all means an incisive thinker, capitulates to the most insidious of these anxieties when she explains that she took off her headscarf with the rise of the Brotherhood.  “I didn’t want to be like them,” she says in The Trials of Spring. But in this small phrase, she performs a dangerous conflation of religion and state. And it’s one that doesn’t reconcile with the reality on the ground in Egypt.

Even after the military wrested power away from the Brotherhood, the offenses against women continued on both the individual and institutional level. The virginity tests continued to be administered under the reign of Abdel Fattah el-Sisi, a military general whose faith belongs to the state. And women protesters continued to experience sexual assault during demonstrations, perpetrated by their fellow protesters as well as army officers. Kirollos’ decision to start Operation Anti-Sexual Harrassment/Assault with her friends was compelled by the fact that no one else was going to guard them from the sexual violence that was pervasive in Tahrir Square. In the midst of the political volleying between the Brotherhood and the military, women’s rights were once again marginalized. “They were blaming each other,” says Kirollos in documentary. “Neither of the had done anything to protect women. And women’s bodies became a political battlefield.”

The Trials of Spring does a deft job of handling these nuances, and it’s clear, from the narratives presented within the film, that the problem lies not in an inferior culture or an oppressive religion but from the dominance of masculine institutions. When Nafea goes to trial for protesting against the military, we see her face-to-face with her attackers in court—the military generals and officers standing at the front of the room, in the most obvious position of power. She was never going to win her case. When she leaves the court, she’s heaving and crying. Later in the trial, Nafea fled from Egypt to Lebanon during her trial, so she was convicted in absentia for protesting—meanwhile, nothing happened to the officers who assaulted her.  It’s the Egyptian military that attacked Hend Nafea. It’s the military that continues to inflict violence, not only on the bodies of women but on the bodies of men as well. And it’s the military that uses that brute force to enforce the ideology of the state. This kind of state-sanctioned aggression permeates society in a terrifying way. And because it relies on the strength, and purity, of masculine violence, it means that women will often experience the brunt of that violence.

Watch the trailer for The Trials of Spring:

Tasbeeh Herwees is a writer based in Los Angeles.

I'm a writer and journalist based in Los Angeles, CA.