The gender wars are over and WE WON! | Bitch Media

The gender wars are over and WE WON!

Everyone! This just in! The “gender wars” are over, and women won!. That’s right; after fighting for centuries for equality, our struggles have finally paid off BECAUSE MEN ARE BECOMING JUST LIKE WOMEN. Which, you know, means not only are we equals now, but women are actually the conquerors in this scenario. WE WON!!! 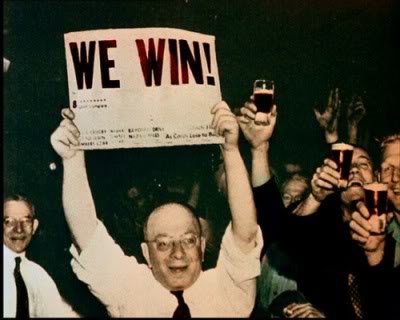 Imagine a woman holding this sign and you’ll get the idea.

OK, we might want to hold off on the victory parades for a minute, because the news of our triumph comes from The Huffington Post courtesy of Marcus Buckingham, whose bio describes him as a “personal strengths expert” (totally didn’t realize that was a job, btw). In today’s issue of the online journal, Buckingham claims that


In a war, no matter the outcome of a certain skirmish or battle, the winner is the party whose attitudes, behaviors and preoccupations come to dominate the postwar landscape. By this measure, the outcome of the gender wars, if wars they were, is clear: women won.

Does this argument seem flawed to you in any way? Yeah. Thought so. Let’s take Buckingham’s points one by one and see if we can figure out what he’s talking about.

Point One: Men’s Attitudes are More Like Women’s Now

Aha! So what Buckingham is saying is that since now a whopping 42 percent of men think that they should be the primary breadwinners and women should be the primary homemakers that somehow men are turning into women. Beyond that, he seems to think that 42 percent is a small number. What if 42 percent of white people believed we should overturn Brown v. Board of Education? Would signify a “win” for civil rights activists because barely half of white people thought that integration was a tolerable notion?

In addition, this argument ignores the fact that the vast majority of households are dual income, meaning that both men and women work as breadwinners.

In 1977, men spent, on average, only six hours a week doing housework, as compared to 21 hours for women. Today, when it comes to the “second shift,” men look a lot like women–men now spend 13 hours a week on housework, while women spend 17. Similarly, 40 years ago, the average Don Draper spent only two hours a day caring for his non-teen kids, while the average Betty devoted almost twice that much time to her kids–3.8 hours per day. Today, Betty’s kid time is exactly the same, while Don’s has climbed to three hours per day. Gen Y dads have taken it up a notch. They now spend more than four hours a day on childcare.

Of course, what this argument fails to note is that societal expectations still largely rest on women to take care of children and housework. For evidence of this, just turn on the television or open up a magazine and count how many parenting/household products are marketed to men vs. how many are marketed to women. The numbers are far from equal, as are the expectations. Plus, the numbers cited by Buckingham still in no way prove gender equality since they are not equal.

Arnold, Bruce, and Stallone are long gone from the screen, but even the flirty, flaky, funny adolescents–Tom, Brad, Jim, and Will–no longer charm us quite as much as they once did. Instead, our leading men are the likes of Zac Efron who, though he can still “Michael Jordan” it on the court, now has to sing and dance charmingly to earn our affection. Or the dangerous but effete and oh-so-delicate Robert Pattinson of “Twilight” fame. Or the gender-bending, pirate-styling and pretty Johnny Depp. Even James Bond has found his feminine side–all he wants is a quantum of solace, crushed as he is at the thought that the one he loved, really truly loved, betrayed him.

Is this guy watching the same movies as the rest of us? According to Forbes, the top five highest-grossing actors of 2009 are Harrison Ford, Adam Sandler, Will Smith, Nicolas Cage, and Eddie Murphy. Sure, Murphy may have dressed as Granny Klump in Nutty Professor II, but those actors are far from “feminine.” And when it comes the likes of Efron and Pattinson, well, teen idols have always been a little on the “oh-so-delicate” side. It’s likely that even little Sally Draper harbored an adolescent crush on Ricky Nelson back in the day, and he was far from a “manly” man.

Oh, and the argument Buckingham makes about “flirty, flaky, funny adolescents” (by which he means adult men acting like adolescents, obviously) not being popular anymore? Well, The Hangover is the fourth highest grossing film of 2009 so far, and those men couldn’t have been flakier if they were made of pie crust. (Also, Transformers: Revenge of the Fallen is ranked at the top of the box office list for this year, so there goes the action movie argument.) Except for the fact that Arnold Schwarzenegger is no longer on the big screen because he is now THE GOVERNOR OF CALIFORNIA, Buckingham’s rant about girly actors just doesn’t make sense.

Oh no! 59 percent of men are struggling with work/life conflict! And it’s because of the mean and scary world that women have “bestowed” upon them! Not because of, you know, the economic depression we’re in, or the fact that the media are consistently stressing us all out with fear-filled tales of parents ruining their kids’ lives by working too many hours. Or you know, not because men ACTUALLY CARE about balancing career and family life. After all, men have no real agency here and just feel however women tell them to feel, right?

Of course men worry, just like women do. But is this evidence of a gender war that women have won? No, it isn’t. It means there is a lot to worry about and men are worrying about it. So are women. If stressing out is an indicator of “the spoils” Buckingham claims women are getting as the victors of this battle then it seems better if we just wouldn’t have won. Of course, we didn’t win because “gender wars” aren’t over, and they were never “wars” to begin with. Time to cancel those victory parties and return to the task at hand: working toward actual gender equality. (Well, that and getting a job as a “personal strengths expert,” because that sounds awesome.)

So this joker's rampant gender-essentialism is proof of the demise of Patriarchy how, exactly? Never mind, I doubt he'd understand the question.

It's delightful, the way liberal humanist blogs magically leave women out of that category of people deemed "human."

Maybe we should all just stop thinking about gender inequality as a war. It's not men vs. women, it's progress vs. status quo.

Bailey, you are absolutely right. One of the (many) things that irks me about Buckingham's post is that he frames the struggle for gender equality as a "war" with a "victor." Isn't gender equality progress for everyone? Why do we have to pit groups of people against one another?

Lovely analysis and some great comments. This is why I love Bitch :)

The second I read the title of your post I thought, "I didn't know there was a war to begin with..." I'm glad we're on the same page ;) This guy probably thought the shit stopped hitting the fan when women started wearing pants in public. Heh-- right. Now he's proclaiming our supposed victory. What a gentleman.

I really am growing tired of hearing about gender wars. When will people learn that the liberation of women benefits all of society and would bring about equality/equity rather than winners and losers?

Somewhere along those lines they failed to mention morals and ethics disappearing, the fact that guys don't want to commit to women due to the risk of financial ruin, another fact is men from western countries are looking to marry feminine women from Asia and Russia.

The truth be said on the benefits of men thinking like women, guys have become " smartly selective" of what woman to date if she has no assets she gets no dates.

Another great thing is men don't have to commit or share resources in order to get laid. In this war it's great been the loser

Who says men will even want to get married in the future. Soon they will not be equal to women in education so there for not many men will bow to women they would rather get the countless permiscuois young ones. No children with fathers and most likely women will not want children in the future.