The New Women in Power Behind the Scenes of the NBA 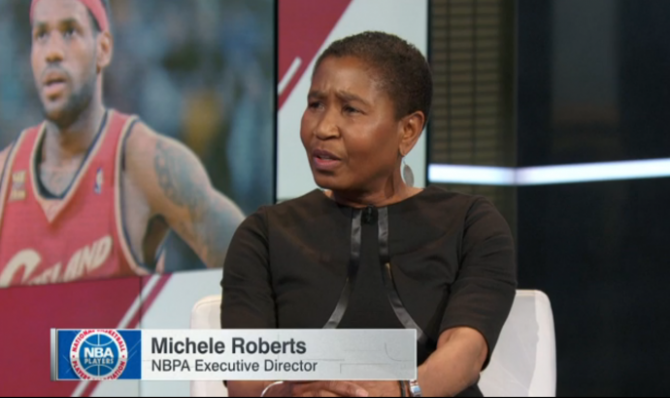 Michele Roberts talking on ESPN about her job as the head of the National Basketball Players Association. Video still from ESPN.

Professional basketball is, by design, deeply divided along gender lines. And with this divide—which persists across leagues, management, and ownership—comes a clear power hierarchy. Men’s professional basketball possesses cults of personality, pomp and circumstance, and enormous paychecks, from which professional women’s basketball is almost wholly excluded. WNBA players earn a milifraction of what their male colleagues earn. As one recent example, WNBA star Brittney Griner earned under $50,000 in 2013, when she was the top draft pick for the WNBA. Andrew Wiggins, a rookie with the Cleveland Cavaliers, is poised to earn more than $11 million over his first two years.

As a new season of men’s professional basketball started last week, there were two new “players” in the NBA that could indicate a sea change toward greater gender equality in the NBA. The first is Becky Hammon, the 37-year-old former WNBA player who the San Antonio Spurs hired as a new assistant coach. As the NBA’s first full-time female assistant coach, Hammon will help head coach Gregg Popovich lead a roster that has earned five NBA championship titles between 1999 and 2014, including last year’s championship where they beat the Miami Heat. When an elite team and coach like Popovich and the Spurs decide to bring on a female coach, it’s not just another standard hire—it is a statement. 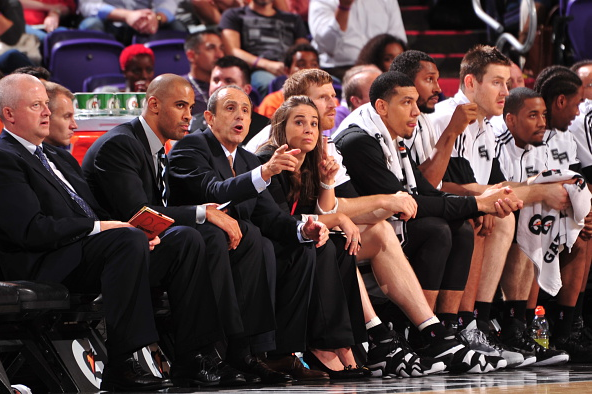 Becky Hammon stands out among the Spurs’ coaches. Photo via BeckyHammon25.com.

At the end of July, about a week before news about Hammon joining the Spurs broke, another woman made headlines with the NBA. Michele Roberts, a 58-year-old renowned attorney and partner at her firm, was voted in as the first female executive director of the NBA players’ union. As the New York Times noted, to lead the players’ union, Roberts will represent several hundred male athletes as well as “deal with league officials and agents who were nearly all men; she would negotiate with team owners who were almost all men; and she would stand before reporters who were predominantly men.” The union had been searching for a replacement for 18 months after the last director, Billy Hunter, had been fired in February 2013. Clearly, the search for a new chief was a serious, time-consuming effort.

While they are still anomalies, the appointment of Hammon and Roberts brings greater visibility to gender disparity within the sports industrial complex. But how did these hires come about? Neither would be possible without decades and decades of feminist activism to build a professional women’s basketball league as well as more opportunities for women in law and labor organizing. Even as they are fruits of activism, not to mention their own ambition and hard work, both women downplay, even eschew, the relevance of their gender.

“I am more mindful of the fact that I am woman because people keep telling me. I’m happy. I’m pleased. I’m delighted. I’m proud. I love that other woman can look at me and their daughters can look at me and see yes it is the case, that even in male-dominated sports, there is room for us. But I gotta be honest, perhaps I don’t understand the full significance of it. I’ve got an opportunity to do some great work.”

And Hammon has sung a similar tune. “It’s not about being a woman, it’s about having a great basketball mind,” she told ABC’s Robin Roberts. In the same interview, Roberts asked Hammon if she felt confident enough to coach the men. Surely new male coaches waver in their confidence at times, but would any journalist have asked a male assistant coach this question? 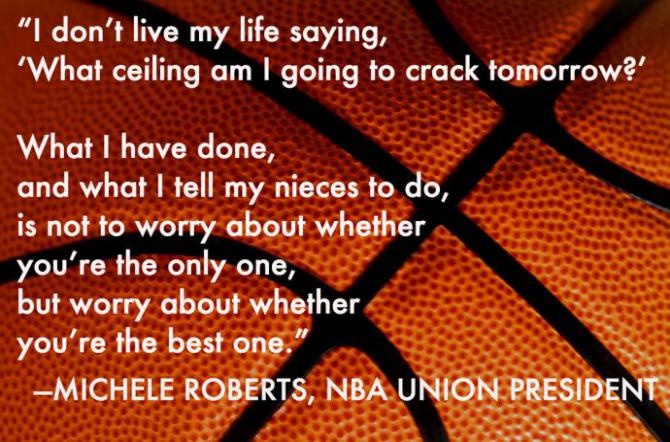 However, it is still important to note that if having a great basketball mind were the dominating requirement to coach a professional team, Hammon would not be the only woman in this job today. Despite low revenue and scant attention from sports journalists, the WNBA has endured for nearly two decades, becoming a place where athletes like Hammon can grow as professional players. Yet the WNBA is also a neglected talent pool ripe with potential assistant coaches for the men’s teams.

Hammon’s personal savvy and her existing relationship with Spurs management (she was a six-time WNBA All-Star when she played on the Spur’s female-team franchise) made the difference in this case. But the leadership of Coach Popovich, who seems far more open to new approaches than most men’s basketball management, is probably one of the main reasons Hammon was even considered for the job. Popovich’s unique coaching style reveals itself in many ways, like how he has been known to cultivate a “familial” environment in which players put the team and each other above themselves, as Kelly Scaletta wrote at Bleacher Report in 2013.

Donna Orender, who was president of the WNBA from 2005-2010, corroborates this. “I will tell you that the Spurs program is one of leaders in the NBA. They have a strong culture, and Popovich is amazing as a coach and a man of great personal principle who believes in excellence,” Orender told me. She noted that while men’s players do not consistently attend women’s games, Tony Parker would make a point to come to San Antonio Stars games. This too could be the influence of Popovich, the only coach Parker has worked with during his U.S. career.

Journalist Melissa Ludtke spent her career covering professional sports, back when the gender divide blocked women journalists from men’s locker rooms. Ludtke points out that the NBA has had some important firsts for women, including the fact that as long as she’s been working the NBA has allowed women journalists into locker rooms. “So historically basketball has, in some ways, been a leader in gender equality,” Ludkte told me. This is a far cry from her experience of covering Major League Baseball. As a plaintiff in a case against the commissioner of the league in 1978, Ludkte helped to open doors for female sports writers into MLB locker rooms.

According to Ludtke, Hammon’s new job would not be possible without the WNBA cultivating both women athletes and coaches. For the first time in 18 years, the four teams in WNBA finals all had women coaches in 2014. “If we take our eye off the ball of what’s happening there, we lose sight of historical trends,” she told me.

Unlike Hammon’s extensive ties within the NBA, Roberts’s ascension to lead the players’ union is solely connected with her own ambition and initiative to go for the job, as well as a fearless sales pitch.

In July, Roberts convinced 32 of the 34 voting members of the players association that she was the right new leader through a compelling oration, including this line: “My past is littered with the bones of men who were foolish enough to think I was someone they could sleep on.”

Roberts’s nabbing of the executive director spot is also the result of a players union thirsty for fresh, new leadership. “You can’t overstate what a perilous time this is for the players association,” political sportswriter Dave Zirin told me in a recent interview. “The group has been rudderless for several years. I have high hopes that Roberts will adopt a whatever-means-necessary approach to make sure players really organize themselves to get some semblance of justice and dignity at the negotiating table because over last several years, there has been none.”

Zirin pointed out that Roberts beat out many male candidates for the job, including those with rich labor organizing backgrounds such as Bill Fletcher, former Education Director of the AFL-CIO.

“Roberts’s work experience and her reputation shows she is a fierce advocate, which is what the players need. They don’t need a conciliator,” Zirin said. “My confidence in Roberts also comes from the fact that she is a woman and she won over a room of very macho men. I can’t imagine she was able to do that without presenting a fighting case.”

Roberts’s ascension also comes at a transformative time in U.S. labor organizing, with women emerging as the most important and cutting edge leaders. Ai-jen Poo, director of the National Domestic Workers’ Alliance (NDWA) was just named a MacArthur genius fellow. Poo’s work is regarded as the future of labor organizing, along with the work of Jobs with Justice leader Sarita Gupta, Restaurant Opportunities Center United leader Saru Jayaraman and the Freelancers Union leader Sara Horowitz.

The start of this sea change is not a result of a sudden, new presence of talented women. There has long been an embarrassment of talented women as potential coaches and labor leaders. These unusual hires came about because of men who were able to recognizer Hammon and Roberts’ talent, and how Hammon and Roberts can help them win on and off the court.   For future seasons to continue to shifts toward gender diversity in professional basketball, it will require that more men like Popovich and those who voted for Roberts let go of their notions of gender and leverage talent and leadership among women.

For now, I’m excited to think about the women playing powerful roles behind the scenes at the NBA when I tune in to the season’s first games.  Personally, I’m still flying high from my favorite team, the Golden State Warriors, winning their first regular season game against the Sacramento Kings.

Sheila Bapat is a former employment attorney who now writes about gender, labor and politics. Her first book, Part of the Family, was released this year by Ig Publishing.

Relevant: Opportunity Costs: What the Olympics Show Us About the Economics of Women's Sports 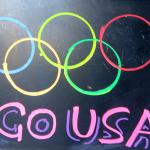 by Kelly Burch
Women who are skilled competitors and elite athletes should have the chance to shine more than once every four years.