The Young and The Feckless: Class Conundrum | Bitch Media

The Young and The Feckless: Class Conundrum

Watching Bristol Palin's teen pregnancy PSA the other day and reading reactions to it (including Bitch's own Kelsey Wallace), I was reminded of a question that I've been turning over in my mind lately, namely who has the authority/credibility/legitimacy to speak to issues of class and privilege? While I think Palin's spot fails as a warning against teen pregnancy, it does offer a frank (if unintended) admission of privilege. Palin acknowledges that her status as the daughter of a former governor and vice-presidential candidate affords her the resources to raise her child comfortably, but it's tone-deaf "If you're poor, think twice before getting knocked up." message betrays a profound lack of understanding about the drivers of teen pregnancy and the role socioeconomic context plays. Does the Candies Foundation (the entity behind Palin's spot) really believe that the decision to have a child as a teen or to engage in unprotected sex that could lead to pregnancy is one that is made on the basis of economic rationality*? Really?

The classist cluelessness of the PSA echos the theme in two news items I set aside from last week. The first, from NPR, reports the discontinuation of a pilot program in New York that paid low-income students for school attendance. The program was shown not to affect academic achievement for elementary and middle school students. The second, from TIME, highlights the burgeoning popularity of what the magazine refers to as "frugality experiments," namely well-to-do white folks choosing to limit some aspect of their consumption (i.e., eating on $1/day, not buying new clothing, etc.) for a predetermined period of time, documenting their efforts and, in many cases, scoring a sweet book deal detailing their epiphanies during the process. You say frugality experiment, I say poverty theatre (well-intentioned or otherwise) or, more broadly, stuntertainment, (and it seems as if the posters at Jezebel would agree).

But like the Palin PSA, the pilot program and these forays into self-imposed privation betray a lack of understanding of the context of poverty. Money is only one part of a multivariate equation. And understanding and addressing the plethora of other variables requires an insider knowledge that those of us who have never experienced poverty and its attendant consequences and conditions lack. But how does our limited information coupled with lack of enfranchisement of those in the know (doubtful that Candie's consulted teen mothers who weren't gubernatorial offspring) affect the development of a meaningful (and badly-needed) dialogue on class issues in America? What are the rules of the game? Is any perspective grounded in privilege confined to paternalism (Palin, paying for school attendance), amateur immersive journalism (frugality experiments) or armchair anthropology critiques (this article)? Given that the socioeconomic dimension of coming of age in America in the 21st century is something I'm committing myself to explore (and in a more meaningful way than simply tsk-tsing and tossing the classist pejorative around), this question is much more than a thought experiment to me.

* One of the most thought-provoking discussions around teen pregnancy among low-income young women than I've stumbled across is contained in The Corner: A Year in the Life of an Inner-City Neighborhood by David Simon and Edward Burns.

I appreciate the tone of this article very much, in that it is open minded and non-accusatory. This reinforces your point that it isn't about screaming "Paternalism! Privilege!" it's about understanding how those paternalistic and privileged perspectives continue to oppress the impoverished and what can be done to stop the oppression.

Having been raised by a single mother (of three) in an area where most people come from modest means, and now living in NYC, I have seen first hand the disparity of wealth in this country, and it saddens and frustrates me. My response is action: I dedicated a significant portion of my free time providing pro bono legal representation for women and children who cannot afford counsel, I volunteer for the New York Abortion Access Fund which pays for abortions for women who cannot afford them, and I support like-minded businesses, like Wholesome Wave, which doubles the value of food stamps at farmers' markets. Certainly none of this goes to the root of poverty, and may be considered paternalistic in itself, but this is what I do as a paycheck-to-paycheck living, self-made woman to do my part to level the playing field that I found so uneven.

Sorry to be a cheeseball; this issue is close to my heart. Thank you for your thoughtful, well-written post.

As a member of Zero Population Growth I like to see anyone spreading the word of planned pregnancy. With Bristol being in the media heavily about her pregnancy, young girls can get the impression that it is "cool" to have a child young and unplanned at that. Simply put, I think Bristol is trying to let those girls know, raising a child is not glamorous.

I agree with Anonymous. Bristol Palin is issuing caution so young people do not see her happy choice and want to emulate her. This happens. Some young people do glamourize pregnancy. And though very few teens will use anything resembling rationality in their sex behavior (because they haven't learned to make rational decisions about anything yet) at least Palin is not ignoring the class issue and toting an "if I can do it, you can do it" attitude. She is acknowledging a real disparity. Is that disparity wrong? Absolutely. Should we fight against it? Of course. Given her family history, I'm actually surprised and impressed with her honesty. I would have expected her to pull the All-American Every Teen card, continuing to keep these disparities out of public discourse. But she didn't. She was actually honest. It's weird, I know.

I think this examination of the Palin PSA is smoke with no fire.

Alex, I actually agree with you that Palin's PSA acknowledges the role of class disparity in teenage child-rearing, but I think that same message could have been presented in a more illustrative/less prescriptivist tone, which I think would have A) raised fewer hackles and B) perhaps provided more substantial food for thought than simply a "Do as I say, not as I did." approach.

My problem with poverty theater, aka current faux-journo stunts, is it gives the performer a sense of enlightenment while leaving the audience less than pleased and even taken advantaged of. Reminds me of the slim, beautiful celebs donning the fat gear for one day, and suddenly, they're Jesus Christ--imbued with all the compassion for the ages. One day. Seriously?

I do give Bristol Palin props for doing the PSA to raise awareness about teen pregnancy. She could have been like Jamie Lynn Spears who makes raising a child look glamorous and easy to do. However, the "think twice before you get pregnant" notion is much more complex than just thinking about it--especially for people in poverty. I mean, lower class women are more likely to get raped than upper class women. You don't just wake up and say, "Hey...I think I'll get raped today." When things like this happen to women in poverty, reaching emergency contraceptives is much more difficult, and there be a lack of knowledge about where to access them. Teens in the upper class have better access to contraceptives, emergency contraceptives, and information about pregnancy. Teens in lower class areas do not always have this same privilege. That's what it all comes down to--privilege. For people like Bristol Palin, they don't really have to worry about not being able to find adequate child care, being able to access contraceptives, and having proper knowledge about sex and the risks that come along with unprotected sex. Not everyone has these luxuries, and while Bristol is sending out the message that raising a child when one is so young, she is not really getting to the root of the problem that most teens face when becoming pregnant.

Relevant: The Fragility of Solidarity 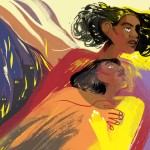 by Jessica Marie Johnson
Easier to blame POC "identity politics" than anti-Blackness or wages of whiteness. Easier to fall in line with the new president than to resist.