The Young and The Feckless: Mo' Education, Mo' Problems?

According to a study by the London School of Economics, British women with degrees are 86 percent more likely to drink frequently and to report having a drinking problem than those women without post-secondary education. The more education a woman has, the more likely she is to hit the bottle. As a graduate school educated young woman who had to do some quick mental math to remember when she last imbibed (spiked eggnog at Christmas?), I couldn't help but find find this story fascinating. 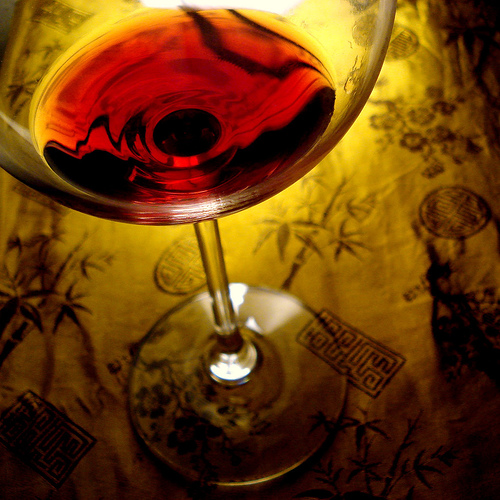 What could be motivating our British sisters to turn to the sauce? The Telegraph article on the study suggests several reasons for the correlation - active social lives, holding jobs in male-dominated workplaces with drinking cultures, having grown up with middle-class parents who drank - but these are all fairly mundane (if not a bit facile). I prefer to imagine that a plethora of examples of sex-based workplace inequality are literally driving women to drink. There's the fact that only 13 of the CEOs of Fortune 500 companies are women. Or how about the recent news that newly-minted female MBAs make an average of $4600 less than their male counterparts at their first post-grad jobs? Or maybe they've been worrying their pretty little heads about the prospect of becoming a home owner? Or they've stumbled across some career advice like this and decided it called for a stiff drink? Bottoms up, girls!

As legitimate and concerning as these issues are (and facetious treatment aside, they most certainly are), I can't help but wonder if there is a more existential link between educational attainment and drinking behavior. Does increased education, whether by prolonged absence from the "reality" of the workforce or the inculcation of a certain academic analytical perspective (which could easily be turned inward after the days of paper writing are done), reach a point at which it provides negative returns to scale in the form of dissatisfaction with one's life/surroundings/context/crippling debt load, which is, in turn, mitigated and self-medicated by the consumption (or overconsumption) of alcohol? Could the link really come down to a case of mo' education, mo' problems?

You have my permission to mull over that little theory with a glass of wine in hand.

I don't know if they're necessarily related. I agree that college definitely plays a role in whether or not a woman drinks, but I don't think they're connected beyond that point. Plus I think other factors play into a person's motivation to excessively drink too.

As an attorney, I can provide anecdotal evidence of the perhaps-facetious theory that being comparatively underpaid drives educated women to drink. Those of us who had to pay our own ways through college/grad school are strapped with staggering debt (even with scholarships), often obliterating the increased salary that our increased education commands. It may be the case that women are especially susceptible to this situation because women look to advanced degrees to place us on more equal footing with men in the job market. Attorneys especially are notorious for their drinking problems, and I wouldn't be surprised if it were due in part to the stress of spending enormous amounts on education, only to find oneself living in a tiny apartment subsisting on rice and beans as the "payoff" for a 60+ hour a week job. Not that I'm bitter or anything. :) Personally, I agree with anonymous's comment that factors other than education are likely more salient. I would also not be surprised to find that the statistics were skewed because educated women are more likely to be paying for their own alcohol and that the reporting was based on sales rather than actual consumption.

all women drink loads of booze regardless of their education. Same goes for the men. I don't think there's much difference in the quantity, just maybe the quality, between the binge-drinking of the upper classes and that of the lower classes.

That being said, the attitude of universities over here in the UK is completely different to the US. Since the drinking age falls roughly around the time most students get out of school and start uni, universities have fresher's weeks centered not around introducing the young students to academia, but to the glorious world of alcohol and the overwhelming peer pressure to binge on as many horrible free alco-pops as you can stomach, in the naive hope that in between vomiting in gutters at three in the morning and passing out in a stranger's flat you'll meet people who will become your super best friends for the rest of your academic career!

I think nobody over here respects the fact that people don't *always* have to be drunk to socialize. It's the Great British Myth: more alcohol= less awkwardness! Less awkwardness=more fun!

I don't really believe this research though. Everyone knows high-schoolers could drink doctoral students under the table.

This reminded me of a completely unrelated (sort of, it involves work) topic. I learned about a study that people who received healthcare from their jobs tended to overuse their medical benefits with, often, frivolous trips and treatments. At first, I thought this was stupid. But then I looked at my own professional example. The moment I was gainfully employed with a good healthcare package, I started going to the doctor more to surgically fix my minor problems, when I could've focused on preventative care. Because it was there and it was free.

The drinking is probably due to added stress of such a high-profile career and realizing, once they made it to their proverbial top, that it wasn't all it's cracked up to be.

Isn't this related to the Maria Shriver report about women are less happy now then they were in the 1970's even though they have "more" economic freedom?

How oddly appropriate that I just watched the Misery Chick of Daria before reading this. In it, Jane tells her, "When they say, 'You're always unhappy, Daria.' what they mean is, 'You always think, Daria. I can tell because you don't smile. Now this guy died and it's making me think. And it hurts my little head and makes me stop smiling. So, tell me how you cope with thinking all the time, Daria, 'til I can get back to my normal vegetable state.' "

Sorry for the typos. If I could figure out how to edit my comments, I would.

I have to agree. It's the pay gap that has women down because it just doesn't seem like they will ever get on a level playing field. And not only that, I think it's kind of a stress reliever as well. Consider with less education - they have less responsibilities, less things to worry about. Now think about women with higher levels of education - they have more things on their mind, and maybe just want to cut loose because of the pressing issues of not only society but their career as well.