The Young and the Feckless: The Myth of Gen Y Homogeneity | Bitch Media

The Young and the Feckless: The Myth of Gen Y Homogeneity

An interesting question was raised in the comments section of my recent Model Behavior column and one that I'm no stranger to contemplating: Where is all of the research on and dialogue around the non-white, non-middle class Gen Y experience? Why do we only ever hear about student debt load and the plight of college grads who are moving back to the safe haven of Mom and Dad's suburban oasis? What about those who never made it to college in the first place? Who don't have the option to lean on their families, because these families are every bit as financially strapped (if not more so) than they are? What about young adults who, by virtue of culture, religion or upbringing, have different values or a different relationship to technology than those which defines the Millennial archetype?

These young adults exist and in large numbers, but you wouldn't know it from most media coverage of Gen Y/Millennials (and we share that collective fault with those who guide the research, no doubt about it). Aside from the occasional off-hand mention, they're largely invisible as a subject of study and the primary reasons for this will likely come as no great shock: 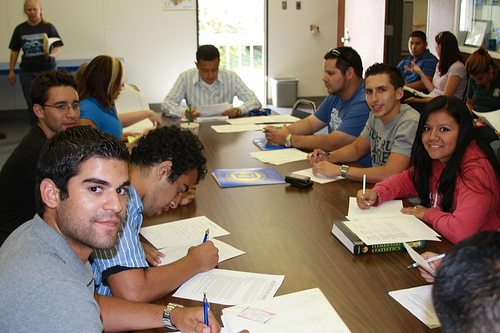 The ugly truth is that poor people being born poor and staying poor has never been considered newsworthy. Class shifts (a weakening middle-class, heart-warming anecdotal tales of individuals who have risen from humble beginnings to the corridors of power, etc.) interest us (if only because of our fear/hope that it could happen to us), social stasis does not. There is no angle for the media or academics to exploit when it comes to the have-nots continuing to, well, have not. Cyclical poverty transcends generational demographics and is linked to a web of factors far beyond which cohort you were born into. I suspect that's part of the reason that it's rarely touched with a 10-foot pole when we discuss Gen Y's current and future plight.

The idea of Millennials as it's now used is a marketing construct. I've said it before and I'll keep saying it. It's based on psychographics, not demographics and presumes an unrealistic level of homogeneity of values, traits and attitudes across a span of youth born over a 20+ year period. You could call them the future middle class, but that's less catchy. Defining, studying, analyzing, writing about, catering to Millennials is useful in so far as it's profitable – hiring and retaining young corporate workers, selling soda, sneakers and electronics and building consumer loyalty, etc. – or has a broader, long-term economic impact – delaying home purchases, abandoning network and cable tv, etc. If these aspects of American life aren't relevant to you, then you aren't relevant to those researching Millennials. End of story. No one is talking in any great detail about the many non-economic facets of the Gen Y zeitgeist and the effects of truly shared experiences during our formative years (9-11, O.J. Simpson, the Iraq Wars, Clinton's impeachment, etc.) at the collective, class and racial levels, because they're too busy analyzing our attitudes toward online privacy to see how much further they can push the behavioral marketing envelope before we start pushing back.

Generational analysis (for lack of a better term) is a relatively new field of study and one that still needs to define and own its true impetus. Is it sociological? A basis for policy planning? Or is simply the latest advancement in market research with some nifty academic endorsement attached as a means of imparting credibility? And if it's either of the former two, we need to call on researchers, analysts, policy makers and pundits to widen the scope of their focus to include those whose attributes don't reflect the current (and largely unchallenged) Gen Y paradigm.

Maureen:
It's true 'Millennial's is more of a psychographic and market research concept today than a policy one. It is a useful construct in so far as it helps marketers make sense of dramatic shifts in their trade. The target audience of today's young adults is not the same as it was 10 years ago due to different values and behaviors among young adults. Marketers have a lot at stake in terms of understanding what this means for their brands and the future of their business, hence the attention to middle class upwardly mobile class Millennials and less attention to the struggling members of the cohort. I'm not sure what your 'bitch' is however? Marketers have never been motivated by altruistic ends. What would you like to see happen?
Carol Phillips

I have absolutely no problem with marketers and the market/trend research industry doing what they do (in fact, that industry is probably the best fit for my particular skill set), but I would like to see more acknowledgment (outside of the marketing sphere) that the term "Millennial" refers to a specific subset of those born in a certain period and doesn't necessarily apply to the cohort as whole. I think media, researchers, pundits, etc. have simply latched onto the description of Gen Y as developed by marketers without stopping to interrogate its merits as a sociological construct (which it isn't designed to be). I'd also like to see other entities and interests outside of the marketing world take a look at Gen Y from a more holistic perspective and devote attention to chronicling its more heterogeneous aspects (a tall order, I know!).

I'm 24 years old, white, female, and lower class (raised in a trailer park).
I've never been to college, though I had straight A's in school, because neither my parents nor I can afford it. I can't move in my with parents if I lose my job, because they're as financially strapped as I am.
I've often attended my full time jobs with injuries and illnesses because I need the money in order to stay independent.

I know many other white 20-somethings who live at home with their parents and often have college debt; whether or not they've actually completed a degree. They often leave work early or only work part-time hours. Their parents and relatives visit them at work, which I find odd. The majority of them act like teenagers or even younger. I fear for my generation...

Same situation here. I moved to Cali to work and go to Community College. 8 years later I'm graduating with a tough degree from a good school with a good job waiting for me with like 10 grand in debt. Don't give up!!

Thanks! How on Earth did you balance work and school together, still being able to afford rent and other necessities?

I'm glad I found this article. You know I've been reading about Gen Y this and Gen Y that and the word "parents" keep popping up. But what if you don't have parents? My mom died when I was 18, dad when I was 25. We lived in extreme poverty. I'm on the edge of being homeless. I see a lot of what the experts are saying though. So much of my generation doesn't have a concept of how bad things can be. Mainly because they still have their parents. I only know because I'm living the nightmare. It's so true that my kind are invisible. I can't find work because of my demographic? Because Employers think I will be a lazy out of touch brat? I'd kill for a job, any job, and I'd keep it too. All I can find are exploitative jobs like telemarketing (only get paid by the sell, often a tiny fraction of what the office gets). At this point I would be ecstatic to just be earning minimum wage...

Sometimes I think society just wants people like me to fade away.

Thank you for this commentary. In reading it I was struck by the thought that a great deal of the Millennials paradigm stems from the marketability of their (white) parent generation, the Baby Boomers. Millennials are posited as white college-goers precisely because their parents were. Millennials are often posited in contrast to the attitudes and traits of boomers, as well. Of course there is a large nonwhite population of boomers, and not all boomers are affluent, but here I'm thinking particularly of the affluent, white segments of that age group that marketers have so effectively targeted. It's worthwhile targeting the Boomers because they have money, and now so do their children. You're so right that this marketing segment hasn't been effectively reexamined for its assumptions about class, race, education and social capital privileges.

Thank you! I'm about tired of hearing the hand wringing over "hook ups" and "sexting" and all this other chow chow, when there are 18 year old working class kids half a world away being blown to bits, only to return home without proper access to support systems they were TOLD would be in place.

Yeah it sucks that some 17 year old sent her boo a picture of her tits and he posted it on facebook, and definitely need to be a PART of the conversation as it relates to this generation, it shouldn't be the only conversation happening.

I wasn't raised working class, but I was raised around a lot of military folk and most of them were babies! Since many don't really have agency considering the way in which military recruiters love preying on the poor, the brown and the otherwise "undesirable" I find the framing of the millennials highly problematic.

Amazing analysis and thank you for writing about this. I heard a hour recently of "On Point" talking about this very issue, which nearly made me rip my hair out!

Not sure I understand the basis for your question? All of the research and discussion around Millennials is more or less gender-balanced. There is room for more LGBTQ emphasis, but from the marketers' perspective, folks of all sexual orientations and identifications wear Nike and drink Coke, ya know?

If you're specifically interested in resources re: identity formation for young men (and not simply trolling), I'd point you in the direction of Michael Kimmel's <i>Guyland</i>, although the emphasis is on white, middle-class young men.

nobody born poor, all of the people born naked ;) then fate tells who's goin' rich or poor, and it's a cycle not a static condition

Relevant: Ask Bear: How Do I Get My Sexist Boss to Apologize?

by S. Bear Bergman
How do you tell someone HOW to apologize for screwing up?