The Young and The Feckless: What Cinema Says About Career Type | Bitch Media

The Young and The Feckless: What Cinema Says About Career Type

One of the most thought-provoking movies I saw in 2009 (okay, I didn't see it until 2010) was Up in the Air. Even months later, I'm still not sure whether I actually liked it or if it's the kind of movie that's even meant to be liked. I do credit it with rekindling my love for the word meta and spurring me to pronounce things to be zeitgeisty at the drop of a hat.

I was reminded of Up in the Air the other day when I was pondering the relationship people have to their work, a subject that has come up in conversation (both online and off) a heckuva lot in recent weeks. In the movie, George Clooney's character fires people for a living and, naturally, most of these people don't take the terminations well. In many cases, their reactions betray an anguish and anger that goes beyond a loss of guaranteed income and benefits. Their jobs represented their identity, their self worth, the means by which they defined themselves in the world. Take away the title and what's left? 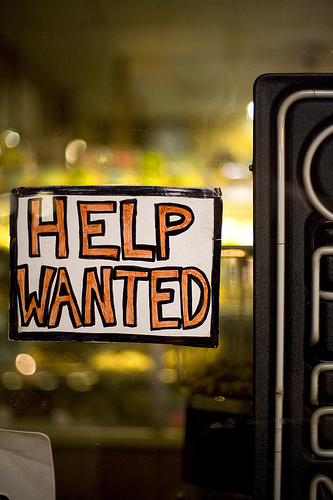 I'm fond (some would say overfond) of theories. Everyone has their two kinds of people in the world (pie vs. cake, talkers vs. listeners, Twilight fans vs. the rest of us) dichotomy, but when it comes to defining the Our Work, Ourselves relationship, I think this particular drive-by analysis calls for a breakdown into three groups instead of the traditional two. Besides, it's more pedantic that way.

For some people, work fulfills a very specific role - it provides them with the income to support their lifestyle and to pursue their own interests in the off-time. They have little emotional connection to the 9-5; it may be pleasant or irritating, but it's a necessity. End of story. Liking your job is irrelevant; it still needs to get done. I believe many of these folks would make excellent hitmen.

Then there are those for whom the job provides validation of their self-worth. Their title, salary and perceived indispensability are a proxy for their worth as a person. Perhaps they genuinely enjoy their work, relish it, even, but the nature of what they're doing (VP of North American Vaporware Sales, for example) is almost incidental to the effort they put into the job itself. Work ethic is their religion. These folks are a dream to manage. They wear their carrots on their sleeve. Of course, job loss or unemployment is particularly rough on this type of worker.

Thirdly, we have those who see their job as more than a pay check or an identity, they see it as an outlet for interacting with the world, for giving of themselves in service of some bigger cause. They long for an emotional and intellectual connection with the substance of their work. Money is great, but meaning is king. Long-term career satisfaction is difficult to achieve for this group. There's always the specter of disillusionment - discouraged by red tape and bureaucracy, disappointed in the less-than-noble motives of others (say, those in the first two categories) or just menaced with the feeling that they could always be doing more.

As much as it would seem preferable to share the mindset of those without personal attachment to their jobs, the engine of the working world depends on the input of the latter two groups - people who will work longer, harder, faster as a means of defining themselves or will prioritize the psychic pay-off of doing "good work" over status and the bigger price tag they might command in a less socially-attuned field or organization. It makes working life more difficult (both personally and professionally) to be invested in your job beyond simply giving an honest effort. Satisfaction is harder to come by and sublimation (of other facets of your identity or other means of defining yourself) is harder to resist. But ultimately, you know you and you know the compromises and trade-offs that you can live with over the next 30 or 40 years. And if devoting that time to a job or jobs that don't provide intrinsic value isn't among them, well, it just isn't. And no amount of well-intentioned advice to the contrary will change that.

For me, just having a job to have a life never works. I have to have the freedom to manage my own time and *work*. I have to be around people who appreciate my work, what I specifically bring to it. I think I'm between #2 and 3.

While I agree, for the most part, your assessment of the three types of work/job relationships I would have liked to have seen at least some hint of class analysis in this post. Having the ability to choose and move between these categories will be influenced by the current class and class culture you find yourself in. For most, category #1 is a very wonderful place to be and you wouldn't be able to get your latte made for you without it.

I absolutely agree that #2 and #3 are colored by privilege, whereas you can be a #1 because that's your mindset or because you don't have the luxury of thinking of work as anything other than a necessity to keep yourself afloat. Self-actualization might not even be on the radar.

I also think "career" as a concept in itself carries with it implicit class assumptions. Career and job/work are not synonymous, but this point often gets glossed over because those of us with privilege tend to assume that issues of advancement/status/future opportunity/personal fulfillment are part of everyone's working life and (short-term economic pressures aside) enter into the equation when one is "choosing" which jobs to pursue. Definitely not so for many, many Americans.

This post resonated with me, because - as a journalism and politics major - I grapple with how "realistic" my chances are of ending up in #3. Jobs that people love are even rarer than, say, employment in general these days. As much as I want to be a #3, I fear I'll end up a #1.