There's nothing subtle about Subtle Sexuality.

According to their fan site, Subtle Sexuality is “a girl group that features two divalicious divas: the beautiful and mysterious KELLY KAPOOR and the pretty ERIN HANNON.” Of course, for those of us who watch NBC’s The Office, Subtle Sexuality is a hilarious web project featuring the talented Mindy Kaling and Ellie Kemper (along with BJ Novak and Ed Helms). Behold: 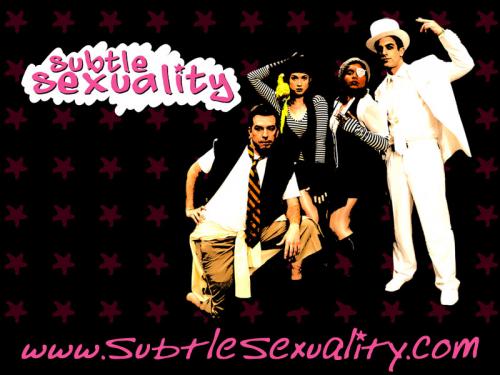 Subtle Sexuality is (so far) a girl group at the heart of a three-part series hosted on The Office NBC Video Rewind site. Though a lot is problematic about this project to begin with (hosted on the network site, available for purchase on iTunes, contains a buttload of ads, perpetuates stereotypes about women and relationships) a lot of it is really funny and (dare I say) a tad subversive as well. Check out the first video, where Kelly Kapoor (played by the super-awesome Mindy Kaling who is also a writer for the show – Mindy, if you’re reading, please call us and be our bff) outlines the story behind Subtle Sexuality:

If you watch the show, you know that Kelly’s relationship with Ryan has been a punchline for many seasons now. Sure, he’s a douche, but she loves him anyway and she likes to paint their relationship as epic and tragic (like a romance novel) as opposed to what it is: a pedestrian office romance wherein she settles for a douche who doesn’t appreciate her. This woman-scorned-yet-also-needy plot is a trite one, but Kaling’s performance as Kapoor subverts the stereotype and shows Ryan to be the fool, not her. Oh, and Kapoor is obsessed with girly pop culture like Britney and Beyoncé – hence the inspiration behind Subtle Sexuality (and her quasi-dramatic behavior and insistence on music video authenticity like a cigarette and a high heel).

So things aren’t perfect. There is most definitely some fatphobia afoot with Kevin (though part of their aversion to him is definitely his poor hygiene) and Ryan is still acting like an ass yet Kelly makes out with him anyway. Is this a send-up of a stereotype, or just the stereotype? Either way, I laughed when Andy sang the song to the vending machine (like I said, I am a major ‘Nard Dog fan). Now to the video!

What did you think? Funny, right? I know there were some questionable lines in there (You look gay in your skinny tie! / I hope you get killed in a drive-by!) that, were this not a parody, would be too offensive to laugh at. But it is a parody, and I think it’s a pretty good one. The women dance around in their office warehouse in store-bought pirate costumes singing about a “male prima donna” and the whole thing reads like a pretty amusing and subversive jam to me. We’re used to seeing men in the power seat in videos like these, which is why Kelly and Erin’s performances could be read as a critique of the music video industry. Also, though the lyrics may be over the top (as are the leotards) they’re honest and pretty catchy. They were written by two dudes (Nate Federman and Jonathan Hughes) though, so that is kind of a bummer.

Enough from me, though. What do you think of Subtle Sexuality? Are you in hell, nirvana, or both?

When I watched this last week, I had a really good laugh because I am a huuuuuge Mindy Kaling fan. Then, my partner suggested that we dress up as "Kelly and Erin" for Halloween. I immediately said, "Yeah, that'll be hilarious," but upon further consideration, decided against it. This is just another opportunity for women to parade around in their panties and claim it's all for a joke. An entire sub-show devoted to skimpy outfits, horrible relationships, and low self esteem? I decided that it wasn't worth the laugh to reinforce so many stereotypes.

Also, the line about the drive by? Not remotely funny or appropriate.

...I wasn't feeling it. I didn't find it funny. I get that it was an indulgent romp that was probably a ton of fun to create, but it felt like an obligation to watch ("suck it up...this is what a Mindy Kaling fan would do, watch").

It seemed like it was made more for them, than us and that's cool...I just don't get all the hype (but I'm happy for her, so it's all good).

I hate Ryan. I wish they'd let the relationship subplot between him and Kelly die already. I liked that she dated someone else (Darryl) when Ryan went to New York, but even then the writers treated her like someone no man would genuinely want. I don't get it. Sure, she's ditzy, but she's also gorgeous and has a lot going for her.
Honestly, if I were to match her up with another character on the show...it would be Erin. Anyone else think Erin has a crush on her, or at least is queer? She hasn't shown any interest in the male characters, despite the fact that several are clearly interested in <i>her</i>, and there was just something about that scene in the basement where Kelly and Erin started dancing...
I think we're due for some queer-lady content on <i>The Office</i>, in any case. I'm sick of the Oscar being the token gay, especially when next to no time is spent on his relationships. (And then there was the coming-out episode, which I thought was <i>The Office</i>'s absolute worst moment, but that's another conversation.)
Anyway, thanks for posting this. I think the name of the group, in particular, is hilarious.

I think Mindy Kaling is great, so I'm biased here, but I generally like the video. Sure, there were parts that didn't sit quite right with me, but there is a lot of good stuff as well. Also of note - the webisodes and lyrics were written by 2 guys, but Mindy Kaling directed it all (her first experience as a director).

I love that Mindy and Ellie are unabashedly wearing spandex, and they both know they're hot. I love Ed Helms in general. And I love the idea that, even though Kelly Kapoor is portrayed as a complete ditz, she can still write a damn catchy pop song.

I laughed out loud at this. The gold stretch pants are perfect and the pirate costumes knock me down. These are a couple very talented ladies.