For one, the shock value of the female dominant rests on deeply conservative ideas of gender binary—that men are This Way, women are That Way, and anyone daring to embody characteristics deemed as belonging to another gender is immediately a transgresser. As long as dommes are seen as not traditionally feminine, we know they’re still being judged by rigid gender standards. And if we see dommes as more positive role models than fem subs, then we are effectively denigrating every “traditionally feminine” quality, as well as subs themselves. In other words, if we respect dommes because they act “more like men,” we can hardly claim they’re flying a good flag for us ladies.

Whenever I think of dominants on TV, in movies or in books, I picture an older, severe-looking woman dressed in restrictive clothing, wielding a whip. She’s usually white, slim, and cisgendered. A foreign accent designed to emphasize her erotic “otherness” might be thrown in—think Milla Jovovic’s PVC-encased baddie Katinka in Zoolander, or Frau Farbissina, the authoritarian leather-clad villain in the Austin Powers films. Yes, these are comedies, so the characters are naturally going to be played for laughs, but it’s interesting that the idea of a sexually powerful woman is seen as so amusing in the first place. Does the threat a domme poses to patriarchal structures mean she must be neutralized with a laugh track?

It’s not as if dommes escape the narrow dictates of what constitutes “sexy”—the clothing associated with them is deliberately restrictive and exaggerates “feminine” sexual characteristics, ensuring women can act manly but still appear female and sexy. I’m sure there are plenty of dommes who genuinely love corsets, spike heels, and PVC—as well as those who wear it as part of their profession—but I’d wager there are also fem-doms who are just as happy brandishing a flogger in jeans and a t-shirt, especially butch, LGBT, or genderqueer women. Yet I’m struggling to think of an example of a domme in pop culture represented this way. So what do y’all think—do female dominants have it any easier in the media, or are they merely subject to different but equally bothersome expectations? What examples of dommes in pop culture would you like to see more, or less of?

Thanks RJ, I agree she's an interesting one and I did look at various clips of CSI when thinking about this piece. Are there any episodes you know where the audience actually see Lady Heather domming? I could only find ones of her running the establishment where other women are actually doing 'the work', and all those women were dressed stereotypically as either dominatrixes or in schoolgirl outfits etc.

I can't remember off the top of my head if they ever show her working. Although my fuzzy brain does seem to remember her doing something kinky in some context in one of the episodes she's in (but I could just be making that up). There is heavy implication (or outright statement) though that she forms a relationship of some sort with Gil and that the relationship is at least partially sexual in nature. Also, the actress who plays her also played a former companion/whore who owned a whorehouse in an episode of "Firefly." /pointless interjection about shows I used to watch a lot.

I think I would agree with you Kate - unfortunately when women are offered a different portrayal of them, it often sadly ends up being just another side of the same reductive coin. Although many folks in the BDSM community identify as 'switches' who alternate between dom and sub, and others simply label themselves 'kinksters' or just plain 'unsure', we don't tend to see this discussed in popular culture - I guess the media likes to fit people into boxes. I did think Stieg Larsson did a nice job of not labelling either Lisbeth or Mimmi as virgin/whore or even necessarily sub/dom, instead just depicting them as two strong women having fun.

For people who are actually in the lifestyle, the stereotypes you see really don't exist except as something to be laughed at or fought against. Which includes LGBT.

My personal problem with the portrayal of dommes in the media is that I've only seen them exist as a toy for a man's sexual fantasy. Yes, she's strong and dominant, but she is only there to serve as a plaything so the guy can get off to whatever "sick" or "sadistic" pleasure that he craves; the dominant doesn't exist in her own right, but only for the "deviant" man who isn't satisfied by traditional sex play. So she is still upholding the gender binary. And, of course, the camera focuses on her with the male gaze while she wears shiny black leather./latex and sports a riding crop. 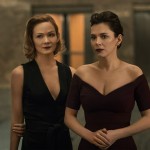