This Jane Austen Adaptation for the YouTube Generation is Actually Wonderful 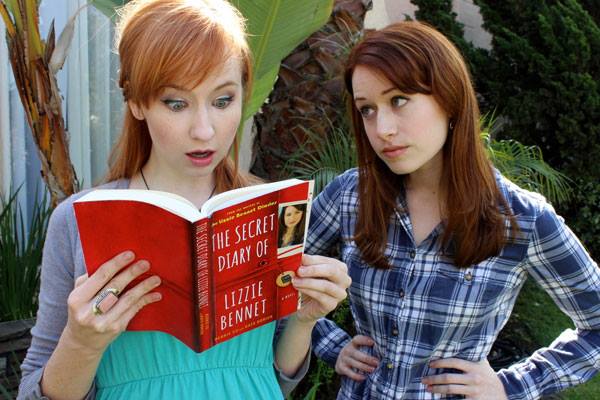 I don’t know if it’s a truth universally acknowledged that a woman in possession of a box set of Austen novels must pass on her love of Pride and Prejudice to her children, but it was certainly true in my family. I began working my way through my mother’s well-worn, paperback Penguin editions of Jane Austen classics when I was twelve, strangely undeterred by the fact that most of the plots revolved around marriage. As I think about my mom, the enabler behind my long obsession with the 1995 BBC Pride and Prejudice miniseries, whose faded red “I’d Rather Be Reading Jane Austen” sweatshirt made what I’m sure was the coolest ever addition to my middle school wardrobe, I suspect that my attachment to Pride and Prejudice was always inevitable.

Still, my love for Austen adaptations has its limits. I’ve never enjoyed spinoff novels. I yawned my way through Austenland. I thought the 2005 Pride and Prejudice with Keira Knightley, while enjoyable, fell short of the BBC adaptation. So when I first began to hear whisperings about The Lizzie Bennet Diaries, a web series created and produced by Hank Green (of vlogbrothers/Nerdfighters fame) and Bernie Su, I admit I was skeptical. I thought there was no room in my heart for another version of Pride and Prejudice.

But after just a few episodes, I was hooked on the fictional video diaries and accompanying social media posts of one reimagined and thoroughly modern Lizzie Bennet. Lizzie (played by Ashley Clements) is a 24-year-old communications graduate student who has moved back in with her (offscreen) parents, big sister Jane (Laura Spencer), little sister Lydia (Mary Kate Wiles), and family cat (named Kitty Bennet, natch). With the help of her lifelong best friend, Charlotte Lu (Julia Cho), she creates a series of video diaries for a school project, opening up her life to a growing legion of faithful YouTube followers. The vlogs are filled with breezy, no-punches-pulled monologues, role-play reenactments of off-camera conversations, and interactions with a host of creatively reimagined characters who stop by while Lizzie is filming. Somehow it all converges into a bizarrely satisfying homage that does more than hold its own amidst countless other adaptations of Pride and Prejudice. The series was such a hit that executive producer/head writer Bernie Su and fellow show writer Kate Rorick have written a new novel, The Secret Diary of Lizzie Bennet (Touchstone, June 24), to give fans details about Lizzie’s life that never made it into her video diaries. 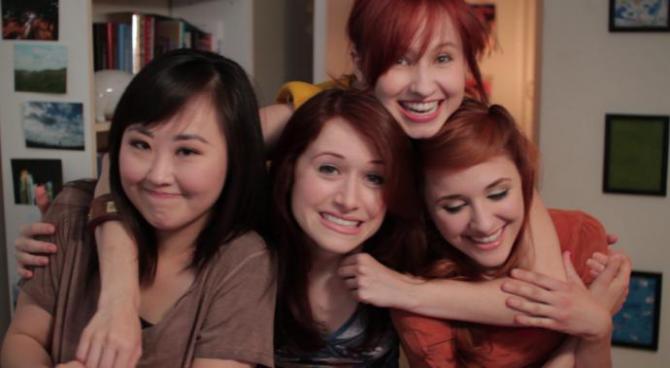 The diversity of the cast is an obvious departure from the novel, and one of the series’ biggest draws. “The show could very well have been cast with all white actors—that’s often the norm,” says Julia Cho. “From the beginning, the people running the show wanted ours to be a diverse cast. As an actor of color, I’m grateful for that. It’s a much truer representation of the world we actually live in.”

Bernie Su points out that Pride and Prejudice has stood the test of time not just because of the love story, but because Elizabeth Bennet is such a strong character. “When you reimagine a woman as independent as Elizabeth Bennet, you have to think about the many choices women have today,” he says. “We wanted to talk about those options—especially career options—in our adaptation.”

“It would be absurd to create a modernized version of Elizabeth Bennet who wasn’t a feminist,” says Ashley Clements. “A woman who speaks her mind, holds out for what she wants, and is loved and valued for who she is—she was as feminist as she could be in 1813.”

The show is set in present-day California, allowing the show to rework many of the book’s original plot points for a modern setting. Watch out, fans, some plot details are ahead.

In Pride and Prejudice, Elizabeth is appalled when Charlotte accepts a marriage proposal from the drab Mr. Collins. In The Lizzie Bennett Diaries, Lizzie chastises Charlotte for taking a job with Ricky Collins (Maxwell Glick). Her friend reminds her that their situations are not the same: “Like you, my family’s in debt. Like you, I’m in debt. It’s just more debilitating than yours.” Lizzie presses, “What about school? Your advanced degree? … You get a degree so you can get a job.” Charlotte fires back: “And Ricky Collins is offering me one! It’s an amazing and lucrative opportunity.”

“Lizzie is in the wrong because she’s still immature enough to believe that if you don’t want the same things she wants, make the same sacrifices she makes, then you’re failing. She hasn’t yet learned that not everyone needs what she needs to be happy,” says Clements. “The Lizzie Bennet Diaries portrays different women who want different things, and they all have different ways of getting there. That, to me, is also very feminist.”

Cho believes it was a “brilliant” decision by the writers to turn Mr. Collins’s marriage proposal into a job offer: “It makes it more relatable to young women today. And then we get to see Charlotte thriving at her new job, running the company. Because of the way they adapted her story, a lot of fans said they were able to revisit the Charlotte of the novel from a different perspective. I was so glad to hear that, because there’s a lot of pressure when you try to tell a story that is so precious to people—you feel you need to do it justice.”

In modernizing certain characters and plot points, the writers also make various decisions seem murkier, less obvious than they were in the book. In a later episode, Jane Bennet’s erstwhile love interest, Bing Lee (Christopher Sean), returns to ask for a second chance. Unlike Jane in the novel, the LBD’s Jane has taken a new job in New York and made a life for herself without Bing. She tells him that he needs to get his own place and understand that she can’t promise him anything if he follows her there: “We’re different people now. I’m going for my career, and my life.”

Despite the title, and the filtered lens of Lizzie’s camera, The Lizzie Bennet Diaries is an ensemble show in which many characters are not just modernized, but given the chance to shine. We learn more about the feelings, motivations, and journeys of Lizzie’s sisters and friends than we ever do in the novel. Clements points to how many shows and films persist in portraying women as “underdeveloped characters, with few interests of our own.” In contrast, all the women on The Lizzie Bennet Diaries are all fully realized characters who have their own goals, their own fears, their own priorities—and their own capacity for growth and change. “We purposefully designed the initial part of the series to be about Lizzie, Charlotte, Jane, and Lydia going through this journey together,” says Su. “We kept saying, we don’t need the guys yet; let’s keep the focus on the women.”

While it wouldn’t be Pride and Prejudice without the romance, and you can’t help but root for Lizzie and Darcy, Bing and Jane, the most compelling relationship arc in The Lizzie Bennet Diaries is not one that Austen focused on at all. Unlike Lydia in the book, who remains largely unchanged throughout, the web series’ Lydia undergoes her own radical transformation alongside Lizzie, finding support and healing within her family after predator George Wickham threatens her with a compromising tape. “To this day, I hear ten times more about Episode 87, when Lydia and Lizzie finally reach an understanding, than I do about any other,” says Clements. “There could be no true resolution for Lizzie until she had recognized the ways she was at fault and healed her relationship with Lydia.”

Even after Darcy and Lizzie finally confess their feelings for one another, the writers resist the temptation to deliver an engagement or wedding and tie everything up in a white satin bow. Lizzie doesn’t even accept Darcy’s offer to work at his company—instead, she announces her plan to launch her own business. As Clements notes, “Lizzie wants to create something on her own, and by the end of the show she’s realized that she is talented enough to do it.”

Since The Lizzie Bennet Diaries wrapped, Green and Su’s company, Pemberley Digital, has completed Welcome to Sanditon and launched Emma Approved. They will soon collaborate with PBS Digital Studios on a reimagined version of Mary Shelley’s Frankenstein featuring a genderswapped Dr. Frankenstein, an “eccentric prodigy determined to prove herself in the male-dominated fields of science and medicine.”

Clements, who recorded the audiobook for The Secret Diary of Lizzie Bennet, says she will always feel lucky to have played a modern-day Elizabeth. “Her character—strong, intelligent, loyal, and flawed—has meant so much to so many people,” she says. “Pride and Prejudice is still the great love story I first read in high school, the story that made me a big Jane Austen fan, but it’s also a story about self-realization, and how much people can change.”

I’ve read Pride and Prejudice more than a dozen times, and each time I find more to like and admire in the headstrong Elizabeth Bennet. I now have my own set of Austen novels, high up on a shelf where my headstrong daughters have yet to notice them. When the time comes, if they are interested, I’ll be glad to share my well-worn copy of Pride and Prejudice—and after they’ve read the book, I’ll be glad to watch The Lizzie Bennet Diaries with them, too.

Yes! Loved the Lizzie Bennet Diaries. Not sure if the actors were all A+, but content was great, and Episode 98 still makes me squee.

What made this series so overwhelmingly feminist for me was its depiction and reboot of Lydia, previously the intolerable immature little sister who got shafted by the novel. In TLBD, Lydia is complicated to the n-th degree, and her character development is probably my favorite in the series. She's an exploration of slut-shaming, emotionally abusive relationships, and consent that we usually don't see in the media. There were a few writing flaws I didn't love about her spinoff and the way her story ended, but I found myself relating to her far more than the other characters. I wish all explorations of female sexuality were so nuanced.

I didn't love the slut-shaming comments directed at the LBD's Lydia, but I think it was made fairly clear later on that Lizzie was wrong about her little sister--and she knew she was wrong. I really appreciated the fact that the reimagined Lydia wasn't the "lost cause/fallen woman" she is in the novel, who can only be "redeemed" through a forced marriage. Still love P&P and always will, but when I went back and read it after watching The LBD, I found myself wishing JA had gone a different route with Lydia.