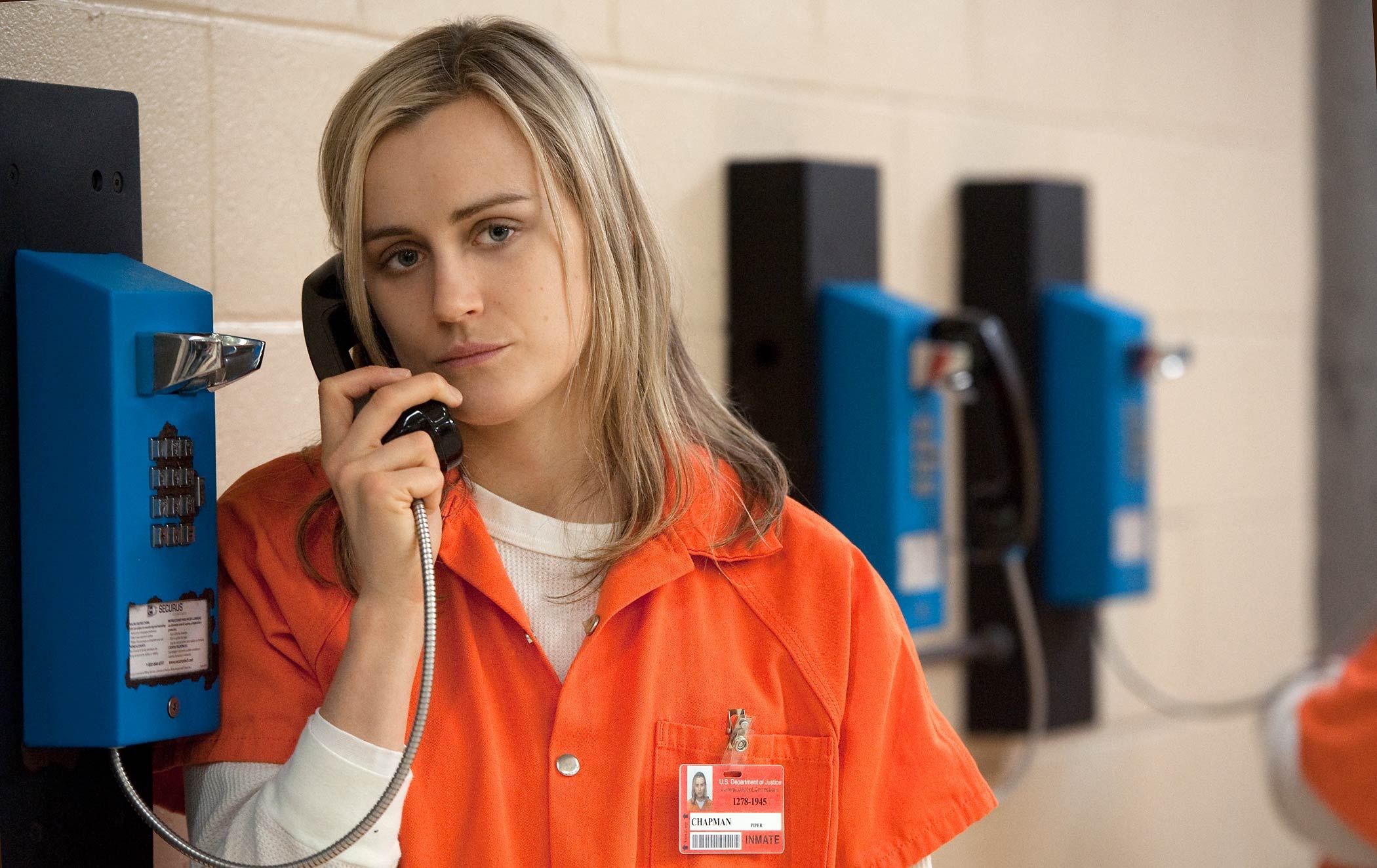 Orange is the New Black catapults women’s incarceration into the media spotlight—the show succeeds at humanizing women in prison while also raising the issues they confront.

However, the show sometimes falls back on stereotypes rather than being a platform to more seriously examine real-life issues, as one might expect from a series designed to be popular entertainment. While writers have already dug into how the show compares to the realities of prison, I think it’s interesting to look at three real-life legal issues that come up in the show.

1. Prison guards who are accused of sexual abuse sometimes allege that inmates set them up. In the United States, it’s illegal for prison staff to have sexual contact with prisoners. Period. There is no such thing as consent between a prisoner and the prison staff member, since the staffer holds control over the inmate’s life. A prison administrator even states this in one of the last OITNB episodes, though his superior—anxious to prevent investigations and lawsuits—quickly quiets him.

That said, OITNB creates a romance between a guard and prisoner. Their romance, which includes hidden notes and sex in a closet, seems sweet (and maybe a little sappy). In contrast, another guard (nicknamed Pornstache) obviously abuses his authority, smuggling in drugs in exchange for sex. Sadly, that’s not a stereotype. In women’s prisons across the country, prison staff leverage favors for sex. In many cases, they also abuse women simply because they can. In an early episode, as main character Piper Chapman (Taylor Schilling) takes off her bra in her cell, she notices Pornstache pausing to creepily watch her.

“Is he allowed to do that?” Piper asks.

“He can do whatever he wants,” her cellmate responds.

OITNB shows the reality that male guards are allowed to watch—and do—what they want. But then, the show veers into stereotype. Seeking to get Pornstache fired, several women conspire to set him up for rape. One woman begins flirting with him and arranges to have sex with him in a closet. Other women lead a prison administrator to the closet, where he discovers them. For viewers unfamiliar with prison realities, the takeaway seems to be that guards caught having sex with women aren’t necessarily abusing their power; they could have been set up. It’s an explanation prison officials frequently offered in real life cases when a guard has been caught abusing his authority—that the woman framed him, even though the rules clearly prohibit sex with the people they’re guarding.

In the 1990s, for example, Stacy Barker successfully sued the Michigan Department of Corrections (MDOC) after having been sexually assaulted by prison staff. In retaliation, staff began harassing her, calling her a “set-up queen” who was always “suing the department.” Guards subjected her cell and belongings to frequent searches. Although she had never tested positive for any controlled substances throughout her eight years of incarceration, each search turned up contraband such as marijuana. Barker challenged these tickets, asking MDOC to allow her to submit a hair sample for testing and offering to pay the expense herself. MDOC not only denied her requests, but also prosecuted her in the (outside) Plymouth District Court for allegedly possessing 0.06 grams of marijuana. After Barker’s attorney filed for discovery, the state entered a negotiated settlement in which the charges against Barker were dismissed and the state paid her court expenses.

By writing a script in which several women conspire to frame the sexually abusive Pornstache for rape, OITNB reinforces the idea that incarcerated women who cry rape actually haven’t been raped. It’s a dangerous message to send out. If you think that prison officials don’t use this explanation, just look at the recent case where an attorney representing the Louisiana prison system claimed that a 14-year-old girl who was repeatedly raped by a 40-year-old guard was “asking for it.”

2. In real life, inmate resistance is often what causes prisons to follow their own rules. When Sophia, the one trans woman in OINTB’s Litchfield prison, learns that her medication has been cut, she argues with the prison’s doctor. In response, the doctor discontinues her medication altogether. Curiously, not a single woman—not even the woman working in the prison’s law library—advises her to file a grievance or formal complaint. One woman recommends that Sophia sue and force the prison to pay for all her surgeries. Sophia dismisses the suggestion. She doesn’t want the prison to pay for her surgeries; she simply wants her court-ordered hormones.

But in real life, suing is often what forces prisons to provide hormones to trans prisoners. In 2005, for example, Wisconsin passed a law barring prison doctors from providing transgender prisoners with medically necessary hormone therapy or sex reassignment surgery. The ACLU and Lambda Legal sued on behalf of two women who sought to continue hormone therapy while incarcerated. On August 5, 2011, the U.S. Court of Appeals for the Seventh Circuit upheld the right of transgender people to receive medical care while incarcerated. The U.S. Supreme Court turned down the state’s appeal.

In 1995, the Prison Litigation Reform Act was passed, requiring prisoners to exhaust the prison’s grievance system before they can file suit. So even if Sophia had wanted to sue for a reinstatement of her hormones, she would first have to file a grievance. The episode would have been a great opener to introduce how prison grievance systems work—or more often, don’t work—and the idea of resistance in women’s prisons. But is the existence of a grievance system even mentioned? Nope.

3. People in prison are often housed hundreds of miles from their families. Viewers of OITNB should know that the Federal Correctional Institution in Danbury, Connecticut, the prison setting of the real-life memoir that’s the basis for the show, will no longer be a women’s prison. The prison is the only federal institution for women in the Northeast.

Even before the first season was unveiled, Netflix announced that it was renewing OITNB for a second season. Less than two weeks later, the Bureau of Prisons, which administers the federal prison system, announced the completion of its new women’s prison in Aliceville, Alabama. It will begin transferring women from the Federal Correctional Institution in Danbury. In Danbury, real-life Piper Kerman did her time and was able to see her fiancé on a weekly basis. As Yale law professor Judith Resnick has pointed out, “Aliceville is hard for anyone without a car to get to. There is no train station or airport nearby. Aliceville has no medical center or university, nor many lawyers, religious leaders, or other service providers.” Danbury will keep only 200 of its 1300 beds for women. Had Piper Kerman been sent to prison now, she might be telling her story from Alabama.

OITNB successfully creates a cast of characters that viewers grow to care about, pushing past the usual indifference that people have about prison issues. Given its popularity, OITNB has the opportunity to veer away from stereotypes and shine light on real-life prison injustices and highlight ways in which people inside and out are exposing challenging these atrocities. Will it do so? We can certainly hope so.

I thought one of the most poignant issues explored in this series was what happened to Taystee, the character who gained her freedom and then purposely got herself locked up again after not having the resources to survive out in society. This is a VERY common thing. The fact is, it's extremely hard for most ex-convicts to make it out in the world. Often, they are very poor. No one will hire them after seeing they have a record. Finishing high school is not something they have time for, as they spend all their time trying to get jobs (as this is a parole requirement for most). Getting into college is difficult because having a record makes it hard to get accepted, and it also gets them immediately disqualified for financial aid. A lot of, if not most, of people who go to prison don't have strong support systems. They often don't have families to take them in, and friends they have are usually people who get into a lot of trouble themselves. As a result of not having money and not being able to create lives for themselves, a lot of ex-cons end up jobless, homeless, and with nowhere to go.

So when these people hit rock bottom, they end up realizing that, as much as prison life sucks, it might be their only options. In prison, they have shelter, free food, a bed, and other facilities (depending on what kind of crimes they commit). It's no wonder that so many people purposely get themselves locked up again.

I thought this was a really good critique of our system and society. Life after prison is not as smooth sailing as TPTB want us to believe. The lack of opportunities and rigid parole requirements make it nearly impossible for a lot of these people to get their lives together.

I just wanted to express my gratitude for this thoughtful piece. As a person who has spent time volunteering in a women's prison, I often take for granted that people are relatively informed about prison experiences and would therefore be able to distinguish the realistic and politically charged elements of OITNB from the dramatic touches that make it marketable. But that just isn't the case. I especially appreciated the mention of how so many prisoners are separated from their families and networks by vast distances so that viewers realize that having a weekly visit from a fiancee is not a norm but an enormous privilege. Although having a show like OITNB on television is providing valuable exposure of the injustice of prison bureaucracy as well as humanizing the "criminals" we readily put behind bars, it is not enough to take the representation at face value. Hopefully this show will help encourage more people to consider what goes on inside prison walls and the very real lives affected by it.

In many cases, they also abuse women simply because they can. In an early episode, as main character Piper Chapman takes off her bra in her cell, she notices Pornstache pausing to creepily watch her <a href="http://bestbudsapp.com/">dispensary denver</a>