Too Little Too Late? | Bitch Media

Too Little Too Late? 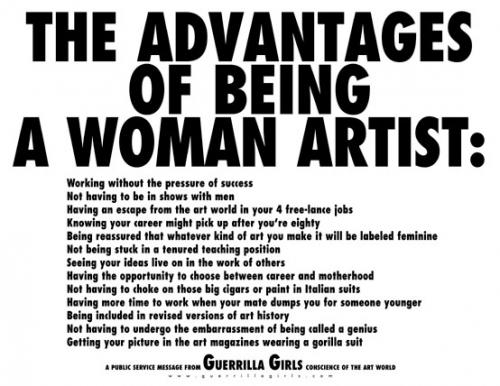 A quarter of a century ago, New York’s Museum of Modern Art opened An International Survey of Recent Painting and Sculpture, a supposed international and comprehensive exhibition of the most significant contemporary artists. Every artist was a white American or European and of 169 artists featured, only 13 were women. Shortly thereafter, a group of kick ass feminists founded the Guerrilla Girls. Wearing gorilla masks to maintain anonymity, the Guerrilla Girls have been using various clever forms of activism to educate the masses about the gender and race gaps in the art world since before I was born. And it appears that the Museum of Modern Art may be beginning to pay attention…

According to an article in yesterday’s New York Times, the MoMA has been working on increasing the attention they give to women artists, which has been scant, to say the least. Projects in the works include:

I poked around the internet quite a bit and the supposed exhibitions in the last bullet point remain somewhat mysterious to me. The photography exhibit strikes me as a bit strange…does that mean the other 11 months will feature predominantly male photographers? If we can judge the near future by recent past, than the answer is a resounding yes. Sort of reminds me of the Guerrilla Girls poster about token history months:

So, is this attention being paid to female artists at the MoMA too little, too late? A bit more tokenism aimed at assuaging us angry feminists? Or is the art world really beginning to realize and acknowledge that there are (and have been) boatloads of extremely talented women artists that deserve to be featured and celebrated? Personally, I’m skeptical, but I’m willing to wait and see if the MoMA and other museums get up to speed in their representation of all genders and races and until they do, I will not be quiet.

Postscript: Check out this video of the Guerrilla Girls giving a presentation at the MoMA, in which they thank the museum for making them angry enough to begin their group. It’s a little on the long side but it’s worth it, I promise.