Top Ten Reasons Why This Feminist is a Sports Fan: #8 | Bitch Media

Top Ten Reasons Why This Feminist is a Sports Fan: #8 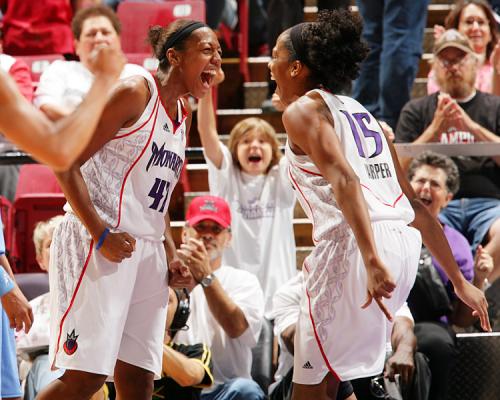 #8 SPORTS ARE ONE OF THE FEW REALMS WHERE ADULTS PLAY. 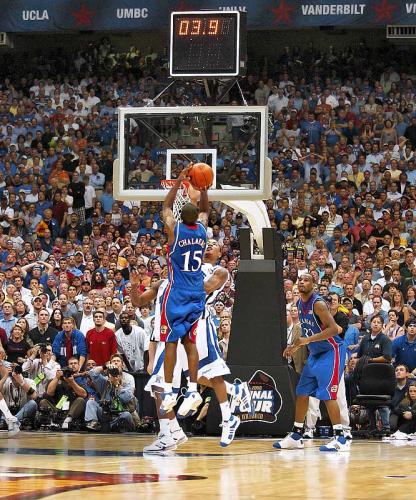 Sports are joyful. Otherwise sophisticated adults run around and get dirty; they take risks and they sweat. They jump just to see how high they can go. They run just to see what it feels like to move fast. By turns, athletes cheer on and comfort their teammates. Their intense focus is broken only when something surprising or thrilling happens--and they celebrate with a giddiness that we are too accustomed to associating with little kids.

Sports, let us never forget, are about playing games.

And it's not just about the athletes themselves. Sports create spaces where fans too permit themselves to play. Fans are gleeful. We see it in Fenway Park fans who sing "Sweet Caroline" with thousands of strangers-turned-comrades, and in Red Wings hockey fans who sing "Don't Stop Believin'," crescendoeing together at the line, "... born and raised in SOUTH DETOOOIIITTT." We also see it in college football fans who hoist up one of their own and, pumping their arms, lift her high for each point scored. From face-paint to favorite chants to bucket-thumping, from the tradition of ringing your keys in unison during "key" plays to singing and swaying "Take Me Out To the Ballgame" during the seventh-inning stretch, there is really no comparable space in our society where adults can be playful and goofy.

It is not that manners go out the window--the stadium has its own rules of etiquette, as we see with the bleacher backlash on fans who have too much to drink, say, or inappropriately interject themselves into the game. 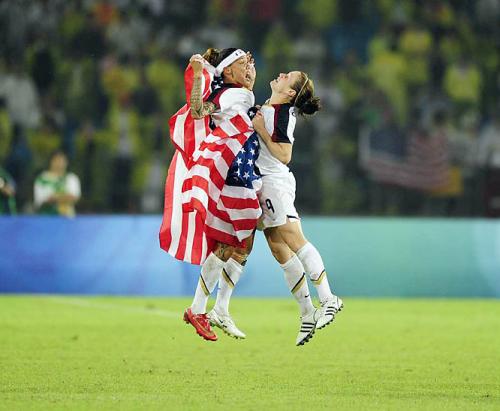 In the sports arena, playfulness is prioritized both on and off the field (or court, or rink, or mat, or track). It is an inverse of the day-to-day societal instructions to keep our emotions sedated and our movement, limited. In the bleachers, it's not weird to high-five strangers or to stomp your feet or to burst into song. Even in front of a television, watching a game at a bar or with friends in a living room, it's not weird to jump up and scream with joy. Under any other circumstances ... it is.

Sports normalize playfulness for adults, both athletes and fans. I, for one, can't imagine sitting the game out. It's too much fun.

Top photo pictures Laura Harper and Crystal Kelly of the Sacramento Monarchs celebrating on the court in 2008; via the WNBA.

Side photo pictures Mario Chalmers as he goes up for a game-tying three-pointer with time running out against Memphis. Kansas would go on to win the 2008 game in overtime; via Sports Illustrated.

Last photo pictures Natasha Kai (left) and Heather O'Reilly of the U.S. soccer team that got past Brazil 1-0 in the championship match at the Beijing Olympic Games; via Sports Illustrated.

I have been reading this and have been interested in because I feel that sports and feminism do not mix. The reasons you have listed are true. But for me, the reasons why I have never gotten in sports is:

1) advertisements: the commercials, the corporations that sponsor the athletes, the sponsors of the events, etc etc. Nike? Adidas? Sweatshops!
2) it builds community? I suppose. I in North Dakota. The university I go to has an extremely racist logo. The arena was paid for by a man who used WWII as a way to advertise in a casino in Vegas with the workers wearing shirts saying, "Hitler: Touring Europe 1939 to 1942." The city I live in has a huge obsession for the sports team but it is also built on horrible racism. The area also has the two hugest bars in the state. Why would I support that? I don't. Not to mention the people who have the obsession with the sports team also are HUGE supporters of the racist logo. There are also many other racist logos. They refuse to look at their white privilege. Some of the indigenous communities around the city have spoken out against. The logo is in lingo right now, too. Staying? Going? The indigenous students have been getting threats from white students. The person who designed the logo is indigenous and was paid $1000. The university has probably benefitted millions from it.
3) On the Superbowl - domestic violence goes up. Who knows what other events have the same thing happen.
4) Alcohol! So sports and alcohol go hand in hand. As a womyn in recovery, I have faced the dangers and consequences of alcohol. Sports perpetuates it. It normalizes drinking.
5) Sports and everything around it perpetuate capitalism and consumerism. Tickets, clothing with logos ...
6) Gender roles! Womyn who like sports can be called "dykes" (obviously in a negative connotation) men who don't (I grew up with my step-dad who did not like sports ... and my brother doesn't) can be called "fag". My mom loved sports growing up and was called names all the time ...
7) How many people can actually afford to go to games? I can't. I guess I could watch it on television. I am a single mother on welfare going to college. I do not have cable. If I did, I would be bombarded with commercials telling me what to buy and how to look.
8) Body image! I remember being obsessed with gymnastics bodies because they were "perfect" and I was "fat".

This list for me is short. While I agree with the reasons thus far, for me the bad outweighs the list that is up so far. I am interested to see what else gets posted, however.

I can see your points and I agree that sports has been associated with consumerism, privilege and substance abuse and that these associations should be questioned in relation to feminism. But just because something has been commercialized or co-opted doesn't mean that the thing itself is the problem. All of your arguments could also be directed at the music industry as well. But music, in itself, is not the problem and neither are the sports. And to me the issues you site in North Dakota sound like reflections of some deeper problems within the community (racism, privilege, etc.) and would rear their heads in any large public forum, including sports.

Relevant: When Women Are Always the Heel 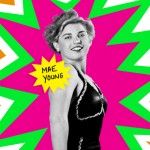