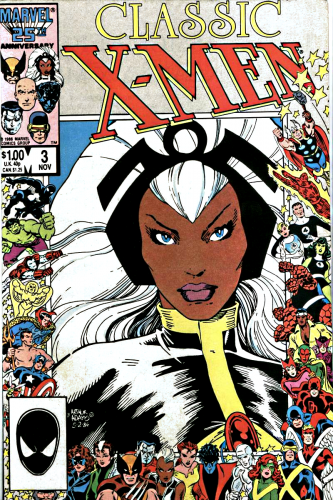 I am not anywhere in the neighborhood of an avid comic reader, but I was a bit of an enthusiast as a kid. Comics have not always proven to be bastions of feminism, especially with CCA regulations keeping such tight controls on content until the 1989 revisions. These allowed LGBT themes to be presented in a non-stereotypical and otherwise negative light (and even that is still a progress). There is plenty to critique, and still I find plenty to commend.

Comics have also done a bit to normalize disabilities in the eyes of their readers. Kids growing up with a disability might be able to find their favorite superhero rocking out with a disability of their own. So, here (and with a huge tip of the hat to my bigger nerd than I partner for letting me pick his brain), is a list of major players with disabilities who were portrayed as more than props or pathetic tropes meant to teach the able-bodied A Very Special Lesson.

In no particular order, and without further ado:

Professor Charles Xavier. I guess I'll start my list with what might be the most well known disabled comic character. Having lost the use of his legs due to a spinal injury, he is a full time wheelchair user, and arguably the most powerful PWD comic superhero. Marvel's site lists his telepathic ability as having a range of 250 miles unassisted (without Cerebro). In my limited scope of X-Men comics I have found his disability to not be a focal point of the story lines, except when dealing with his own feelings on that disability. Sure, Professor X has some history of being a mega-douche in some of the story arches and alternate universes, so he isn't beyond critique, but I found the portrayal of his disability positive. Some people, as Anna_Pallindrome pointed out in her post recently, would argue that his portrayal also isn't as believable because he never seems to encounter any sort of mobility barriers as a result of his disability. Because of the magic of his advanced technology, he will never have to worry about that "one step". We know that in this society if you have enough money to throw at something you can get around anything, right? Some story lines actually present the idea that his disability is all in his head -- that all he has to do is "think positively" apparently, and he can just get over it. Where have we heard that before?

Daredevil. I believe he is the first major comic superhero with a disability, and will certainly take a polite correction with an awkward grin. He was blinded by radioactive chemicals that spilled from a truck, although, since they heightened is other senses to superhuman strength, he isn't really blind, just without vision. This sort of feeds the trope that if a PWD just tries hard enough that there is no reason society should have to accommodate hir. See? If you just work really really hard, and you can get along just fine!

Tony Stark/Iron Man. Incurs a heart injury when a chunk of shrapnel becomes embedded in his chest and is kept alive by a magnetic chest plate. Later, Stark's condition is discovered, and he receives a new heart, but he develops severe alcoholism from which it takes him years to recover. Alcoholism is debated as a disability, and its validity as such isn't something I am willing to discuss here. How Tony deals with it and how he is treated as a result of it is.

Storm, or Orroro Monroe, is orphaned at the age of six. The same disaster that kills her parents leaves her buried in a pile of rubble. She is extremely claustrophobic as a result (I just have to say, that my partner is some kind of über nerd, because that seems strangely obscure). I think I love her a little bit more because of it, actually.

Deadpool. His healing abilities keep him alive despite his unspecified terminal cancer. The combination of these two elements leaves a lot of physical and mental scars on him over time.

Rogue. Let's talk about Rogue shall we? Rogue is one of my favorite comic characters of all time, so take that for what it's worth. Rogue's ability to absorb the life force of those she touches, or in the case of mutants, temporarily absorb their powers, also has the side effect of causing her to take on some of their traits. She absorbs a little bit of that person and keeps them with her after the contact is over. When she absorbed Ms. Marvel's and the Kree powers she endured psychological effects for a long time after to the point of nigh breakdown. As I mentioned, I was not much into comics as kid, not having the money for such things, so I have no idea of how realistically Rogue's mental illness was handled in that medium.

This is merely scratching the surface of what is out there. I now open it up to you, dear readers, to discuss other comic characters with disabilities and how they were portrayed. Who are your favorites? What do think about how their disabilities were fleshed out? Were they handled well, or were they tropes?

I can't keep my paws off of this one! I apologize for the repeat info from my response to anna_palindrome's last post. Nerdy, comics, feminist, disability ... just add cats or performance art to that and you have me to a t!

Robotman/Cliff Steele: Was in a race car crash, only his brain survived and he lives in a mobile metal robot body. When we first meet him at the beginning of the "reboot" of the Doom Patrol he is in a mental institution struggling with the loss of touch. He can see, hear & talk but he cannot feel pain. Super-strength, to him, is irrelevant. He is essentially living with a full-body disability and he struggles with a lot of anger about this.

Crazy Jane/Kay Challis: Yes, the names are pretty bad, I admit it, but none of her friends call her Crazy Jane. They might call her just Jane but, because she lives with severe multiple personality disorder, they'll often call her by whichever personality is dominant at any given time. She will remind them to do this. She meets Cliff Steele in the institutional setting and they become friends and bond over their struggles to cope with their respective disabilities.

Rebis: Made up of a young white man, an African American woman and a parasitic spirit magically united into one body. Rebis has both male and female physical characteristics but we only see hir in mummy-like bandages and usually a dramatic overcoat. Rebis is essentially interracial and intersexed (and interspecies, for that matter) but, because this change happens suddenly, some of the issues zhe deals with can be reminiscent of a trans situation. Zhe goes back to the fiance of hir female part with traumatic results. Cliff Steele keeps forgetting to call Rebis by hir "new" name (instead of by the name of hir male part who had been his friend) and Rebis must keep reminding him.

Doctor Niles Caulder: Uses a wheelchair, rather Professor X-ish but no magic floating or superpower. He often has someone go with him when he goes out and I've always thought they might be a little bit of PA, helping him get over and around whatever inaccessible stuff he runs into.

I could go on... my latest favorite is the "gay" relationship between a disembodied head in a jar and a hyper-intelligent ape in Che Guevara gear. Sigh. And an essay by Grant Morrison confirms his interest in the fact that all of these superheroes are actually people living with disabilities, some of which just happen to have super side-effects.

<strong>Barbara Gordon</strong> is my hero, because when the Joker shoots her in the spine she neither continues to be <strong>Batgirl</strong> through some amazing Batman technology or newly acquired metahuman abiliities, nor gives up and becomes a pathetic victim. Instead she becomes <strong>Oracle</strong>, the amazing knowledge broker who holds the Bat-family together and forms her own team of superhero women.

It's not perfect. I wish she'd come up with better reasons for breaking up with Dick that weren't all "I'm broken now"; she spends way too much time alone; and the Birds of Prey are limited by DC's crappy record with female superheroes. But she faces real limitations: supervillains and petty thugs who try to disable her by removing her from her wheelchair, guys who make assumptions. And she overcomes them, but with realistic difficulty. Sometimes she needs help, but not all the time. There's a nice balance.