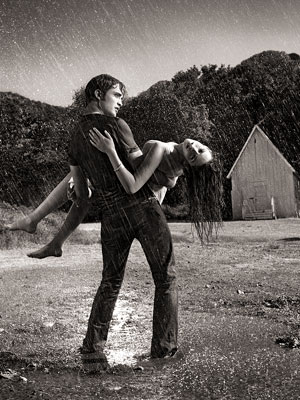 As a kid I had pretty much free reign over what I read, but what I didn't find readily available was someone who gave a crap about what I thought or how a certain book made me feel. This was probably why book reports were some of my favorite assignments (maybe it's why I blog now!). I had a captive audience for validating my thoughts and feelings on whatever I had just read.

I want my Kid to have the same freedom with reading material, and I want to be able to have meaningful discussion with her about the themes and characters and feelings...and anything else that may pop up as she journeys through literature. As a result of this, and probably as a bit of a guilty pleasure, I probably read more Young Adult literature than is advisable.

I guess it was inevitable that this wildly popular so-called vampire love story series that you may have heard of hit my Mommy Radar. It's being toted as this incredibly romantic, never before have young hearts felt anything so incredibly real love story. If someday my Kid decides this is something she would like to read there will be plenty to discuss, like how stalking doesn't equal love, and how if he has to dismantle your car to keep you from your friends maybe he isn't the one to bring home to the fam (and helllooooo, heterocentricism!). Or maybe the way the author seems to view Native Americans as savage, and brown people as dark and unpleasant to behold.

What does this outrageously popular if not possibly anti-feminist anthem have to do with disability? The main protagonist's human condition is practically summed up as a handicap throughout a majority of the series. Her never-fail-to-almost-kill-herself-by-just-walking-down-the-stairs clumsiness is painted as terminal, requiring her to be carried or shoved everywhere (so I guess accessibility isn't an issue, huh?). She can't be left alone lest she try to open a package and get a paper cut (oops, she totally does that!) and must be watched over by a supernatural man at all times. The only part worth salvaging is her womb. She must be kept calm and uninformed constantly otherwise she will become hysterical!, and she breaks her own wrist trying to defend herself when she is sexually assaulted, so she obviously can't take care of herself.

Let's not kid ourselves. Humanity is a disability, clumsiness is a placeholder for that disability and all that is bad with being human, and vampirism as that magical cure, the sure fire fix for all things disabling. It's like The Secret with fangs. It's not good enough to have flaws. To be weak or fragile or vulnerable is a mistake in the genetic coding that must be eradicated. Weed out the imperfections, just like using genetic testing. Why would anyone want to be less than perfect when you can have all of your flaws erased and breath that smells like Mars bars (even though you spend most of your time abstaining from your life source and otherwise hungry)? Why live with a difference when you can be perfect, and pure and whole and strong (and white)? To live as less than perfect must be miserable. Every vampire in the "good" vamp clan was "born" not of perfect humans with no flaws or illnesses, but those on the brink of death ... yanked from the edge of pain, disfigurement, disability or death by being once bitten (and twice shy! Sorry. *Heh-hem*).

It never seems to occur to anyone, let alone the author of this tripe, that part of being human is the gamut of possibility and range of conditions. That there is no "default". Normal is a social construct that the world was built around and if you fall somewhere outside of it, well too bad for you, I guess, is what we are supposed to take away from this. I certainly hope you have a werewolf to keep you warm in the snowstorm or a vampire to bite you in case you find yourself somehow damaged or impaired, or if your pregnancy goes awry. At least that way no one has to worry about how you are going to survive in a real world that is hostile to real people.

I like this take on how this particular force of fiction approaches human imperfection. I'm trying hard to avoid these books myself (my taste for vampire fiction, once a mainstay, feels all worn out now) but I like listening in on the conversation.

Ugh, AGAIN? I love Bitch magazine. I also adore and write young adult books. Yes, Twilight is a shitpile. But there are a whole lot of really good books written for teens that somehow get written off as nothing being "real books" because they're in the same genre as Twilight. It's so annoying that if a book isn't Palahniuk-level cynical or so literary the purple writing oozes out of its spine, it's not a serious book.

On the other hand, great posts and points about Twilight. There's also a lot to think about in the beauty of flaws. I think there are some great books in Young Adult that allow flaws to happen without trying to "fix" everything--Looking for Alaska, Break, and the perks of being a wallflower come to mind.

I suspect that some of us will be writing about positive depictions of disability in YA books, Amanda, it's just that Twilight is especially timely right now because of the upcoming "New Moon" release. And I don't think that Ouyang Dan is suggesting by any means that all YA is a "shitpile" just because she's writing about the problematic nature of the Twilight Saga. In fact, I happen to know that she *loves* YA!

And, unfortunately, this is a disability guest blog, not a YA guest blog! Many of us are actually avid YA readers and we talk about great YA series all the time amongst ourselves, but we've got a lot to cover in eight weeks. (If Bitch wants to have us back as YA guest bloggers, though...)

A lot of the criticism of the Transcontinental Disability Choir posts seems to boil down to "well you didn't talk about all these good things!" And, you know, that's true. Guilty as charged. Because we have a word limit, and we're trying to focus on the ways in which negative portrayal of disability feeds into ableism. That also means that, on the flip side, we're also going to talk about some positive treatment of disability, we just haven't gotten there yet!

Please don't assume that we haven't consumed anything else in the genres we're talking about just because we don't cover *everything*, folks.

Reading back over it, I realize that it was a very small part of the post. It was more the tone of YA as a "guilty pleasure" and that she read more than was advisable that bugged me. I just feel like that's a very common idea that YA is mind candy or something, and it irks me.

I haven't read most of the comments on the guests posts so I didn't realize that was a theme, (but I've really enjoyed the blogs!)

Huh, on my own blog, I am routinely slammed for "wasting my time" critiquing YA lit, as if the desire to be aware of what my Kid is reading is somehow not a worthy hobby, and then when I joke that I read too much of it as a result of that self imposed responsibility, I am also criticized. Funny, that.

Actually I just followed the links to your blog and realized that I'd followed one of those link wormholes earlier today to your post "no one drinks coffee," and I loved it. Didn't realize it was the same person...I should probably pay more attention to things like that :)

I agree, Meyer's treatment of Bella as totally inept really bothered me. I just can't believe that someone would be that helpless, and what made it worse, was how Edward treated her over it. like she was this helpless little woman that couldn't take care of herself, and how completely devoid of personality she is.

Another thing that bothered me was the extremism in their declaration of love to one another: the whole "I would die without you" or "you're my only reason to live." People who are that extreme in their statements have issues. My boss at work was talking about seeing New Moon and how cute Jacob looked, and I made a passing comment about how I liked him more (despite the assault) than Edward, and without letting me finish, she says "Well I just love how he says to Bella that he's her reason to live, can you get more romantic than that?" She's 33 or something. To me, that's one of the least romantic things someone can say, and it's also frightening. If your partner is basically threatening to kill himself if you leave or if you die, that's scary, and that's a warning sign to leave.

Regarding being human.... after I finished reading Breaking Dawn, I initially liked the ending but it was so super saturated with sugar but when I really thought about it, being a vampire would be pretty damn depressing, even if you were with "the love of your life." I want to grow old, I want to have flaws, flaws is what makes us interesting and what makes us who we are. I'm a cancer survivor, and that definitely changed my perspective in life and made me who I am. I'll take my flaws over perfection any day.

The thing too, Carlisle thought he was being a savior or something, but what else is death but the next great journey? The same with aging.

So I've been trying to understand what heterocentrism is, I've looked it up and I know the definition, but how it applies here confuses me. Stephenie Meyer is a straight woman, so why else would she write about any other kind of relationship? You write what you know, you know?

This blog is somehow a sort of an eye-opener and life realization. Thanks for sharing!