Tube Tied: In Which I Praise Six Feet Under | Bitch Media

Tube Tied: In Which I Praise Six Feet Under 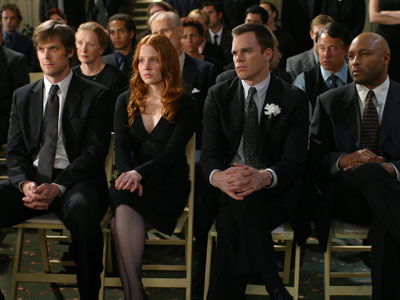 My life has been unusually stressful lately, for a variety of reasons, and my personal strategy to get through such times has always been to devour certain television shows as though they were comfort food. The advent of the show-on-DVD has been a great comfort to me in that respect, because when I'm down and needing to spend some quality time with my cat and my couch, I can get lost in these stories for days. I am one of those people who is sad that movies are only two hours long: I like my narratives long and intricate, nineteenth-century style, which that explains why I'm such a nerd for any show best viewed as a DVD box set. (And, umm, the completely sad amount of money I've spent on acquiring them.)

All of that by way of saying I've been watching a lot of Six Feet Under, lately. Sometimes television snobs laugh at me when I tell them that Six Feet Under is by far my favorite of the high-end cable shows of the last few years. Though the show was always critically acclaimed in its own way, of course, it somehow never got the kind of artistic street cred that either The Wire or The Sopranos did. I have my theories about this, many of which are related to ideas I also have about people's evaluations of worth in literature. Somehow, narratives about the home and domesticity and love and what some people would call "melodrama" are considered "lesser" subjects than, oh, I don't know, war, or the frontier, or the mafia, or anything which is viewed, somehow, as making more of statement about social arrangements than it is about interior thoughts. Don't mistake me; I'm quite in agreement with anyone who says that the preoccupations of a show like Six Feet Under are unquestionably more bourgeois than those of, for example, The Wire. The show rarely aspired to broad social commentary beyond the occasional remark about the commercialization of death. I will also admit that there are days when I feel like politically I ought to be more upset with myself for loving this show as unconditionally as I do.

But on other days, I just think of it as proving the point I keep repeating in this space: that there is a part of me that firmly believes that nothing matters more, in building television that is "feminist," or "progressive," than execution. It's not that Six Feet Under was flawless. I was never fond of the arc involving the sudden appearance of a pre-Dwight Schrute Rainn Wilson, in the third season, or the murder subplot that ate much of the fourth. Come to think of it, the plotting of the show was probably its weakest element. The appeal came more from the sense, throughout the show, that the space it depicted was inhabited by actual, living, breathing people.

Take, for example, the women of Six Feet Under - oh, the women! Frances Conroy's Ruth, with her buttoned-to-the-top gingham blouses and her pleas to her children that she just wants "someone to be intimate with me", who is just about the most humanizing portrayal of an older, sheltered woman I can think of anywhere on television, ever. Can you think of another woman who, in her fifties, is still depicted on television as having sexual desire? Then there's Rachel Griffiths' Brenda, who is prickly and difficult and either a hell of a lot smarter or at least more analytical than every person in the room and has never, quite, figured out how to navigate that. (And who, without claiming to have Brenda's intellect, I best relate to now, when I watch the show.) And of course, Lauren Ambrose's Claire, whose stoner art school early-twenties indecisiveness and string of horrific boyfriends was so resonant for me when I first watched the show, since I was only a few years older than she was and so unsure of who I was or what I was doing with myself.

(Of course I also loved many of the male characters on the show, and in particular Michael C. Hall's David and Mathew St. Patrick's Keith.  Their portrayal of a loving gay relationship complete with child-rearing far exceeded, in human terms, anything Modern Family can aspire to - but maybe that's not the latter's fault, since it is subject to the creative reluctance of a network.)

The critical cliché is to write that they seem like people one already knows, but that's both largely untrue (at least in my own case) and not exactly a recommendation, at least on progressive grounds. If we all only look for people we "know" in cultural artifacts, we are going to have a hard time getting outside ourselves, it seems to me. The point is less that these characters feel familiar in the ways they mirror the real world, but rather in the way they seem to actually move into your head and acquire a reality that isn't dependent on their reflection of the world outside. That might sound like a delusion of sorts, like I'm saying the characters are real when clearly they aren't. I just mean, really, that they are affecting, that they have an emotional reality that propels your interest. And Six Feet Under has always best seemed to understand that of all the television I've ever watched.

Some people might call that emotional machinery manipulative, melodramatic, and I respect their position. But at the end of the day, it's what I'm looking for, even when I'm looking for "progressive" art. I'm looking to be moved, to feel something, to sense the characters moving into my head, so to speak. To see some kind of common humanity across the abyss, you could say, of someone's entirely different experience.  Isn't that what we want, as feminists, or progressive people of any stripe: to have everyone be able to see each other as human beings?That's what gives cultural artifacts revolutionary power, in my humble opinion.  And it's certainly what keeps wearing out these particular DVDs of mine.

Snap! I am re-watching the whole series at the moment as well and heartily agree. It never got the recognition it deserves but I love it. Claire and Ruth are probably my favorites, both individually and their relationship to one another and David and Kieth come in a close second. And I <3 Bettina hardcore lol. Delighted to find your review :c)

Beautifully said. This show is haunting in the depths of the characters. You hit the nail on the head with "common humanity." I too, am only a few years older than Claire. The last episode leaves me bawling - reliving my own break from childhood to adulthood, even though my "journey" was not quite so literal.

This has long been a favorite show of mine, and I've tried to explain it to so many people without much success at convincing them that it is the best show EVER. I appreciate your focus on the depth of the female characters. This is one of those rare shows that gives not only significant screen time, but intellectual and emotional depth to its female (and male) characters. I also agree that the portrayal of David and Keith and their journey into child-rearing was groundbreaking in perhaps such a subtle way that it didn't get more press because it was just so....right, good, well-rounded. Thanks for the article!

Must be something in the air as I am about to go to the library and borrow the 3rd season...I personally think that the show's writers were laying back a bit and letting the actors take their characters to strong places. The archetypes of femme fatale, mother and so on are prominent throughout the show, but the female characters from Keith's niece, Taylor to Mrs. Huntley the antagonist of Fisher & Sons push the show to areas in which many audiences have never either never been, or have wanted to go back to. It is a show that balances female and male attitudes without even having to be overt. Watch on!!

I LOVE that show. My now-husband introduced me to it when we first started dating. He'd only seen a couple episodes, so we watched the rest of the seasons together in record time... and twice more in their entirety over the next year. Now that we've moved in with my family, whenever I have problems with my mom and sister and ask him for advice, he says "Six Feet Under..."

Absolutely love that show, so much. Michael C Hall's character is what got us into Dexter after we devoured 6FU, & we love that, too.