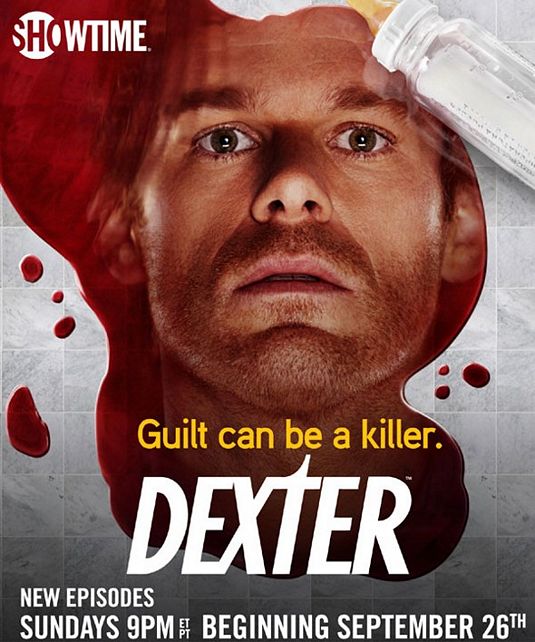 Dexter is a bit of a so far mess this season, isn't it? I'd watch Michael C. Hall do just about anything—I can never quite get over how different Dexter Morgan is from David Fisher. But the series is in the awkward position of having to rebound, this season, from what might have been a perfect endpoint: the murder of Dexter's wife Rita (Julie Benz) in front of their son Harrison, in an echo of the event that made Dexter what he is. One of the problems this show has always had is that each season it sets the bar for intense plotlines a little higher, and as with the fabulousness of last season's twist ending, the writers have usually proved themselves capable of exceeding expectations. But truly, I would have been happy to see the series end right there on the shot of Dexter lifting blood-soaked Harrison off the bathroom floor. Oh well. They never should have killed off Doakes, either, but you can't have everything.

I've written here before that I enjoy the female characters on Dexter, though largely by that I mean that I love Jennifer Carpenter's Deb beyond all manner of reason. I feel like I know a hundred women like her, and she's a type—a real, gangly, awkward tomboy—but one who is nonetheless sexually pretty confident in spite of more than one, uh, bad experience.

That said, the show has an increasingly fraught relationship with its subject matter. Violence against women underwrites much of its dramatic tension; with few exceptions, it's women that the serial killers Dexter targets have largely been after lately, first Trinity with his weird fixation on his sister, and now with Boyd Fowler (Shawn Hatosy), the sanitation man who sealed his blond young victims in barrels of formaldehyde. It's Dexter's status as a vigilante combating that violence that keeps the character the least bit sympathetic. And yet, curiously, the show rarely offers any kind of systemic observation about the prevalence of such violence. It's not even usually discussed as "violence against women," as such. I wouldn't want, of course, the show to turn into a sermon on the subject, nor do I generally find pop culture depictions of vigilante men "saving" "helpless" women from predators particularly compelling or helpful, feministically-speaking. I also understand that this is a genre show, and it needs to operate within certain conventional limits. But it has always seemed strange to me that such a smart show can't push that particular boundary of the genre, at least a bit.

I am not sure yet whether the series' introduction of a new blond woman for Dexter to protect—Julia Stiles' Lumen Pierce—is going to add new depth to the show's treatment of these matters. Dexter has always been a show about the lingering effects of trauma; it operates on the assumption that violence and abuse have effects that are lifelong—at this point, there are few characters on the show who haven't been abused or attacked in one way or another. So in a sense, Lumen doesn't bring much that's new to that paradigm; her damage is perhaps more recent than that of other characters, but being tortured to the brink of death is hardly an unfamiliar experience for these characters. One supposes we'll see; the season is young, and Lumen's only been in an episode or two. But I hope we won't have to wait long for her "twist," because I'm not particularly compelled so far.

Lumen asks Dexter, "Are you going to sell me?" as he is trying to explain to her that he is not going to kill her or harm her further. At the end of that episode, she reveals that she was sold from one rapist to another until Boyd finally got her (I presume that he bought her).
This may explain on a sick level why Boyd had told Dexter, "I put them out of their misery." It is entirely possible that Boyd is a member of a 'ring' of sickos who kidnap, torture, rape, and then sell their victims on to one another. Boyd just happened to be the one who also murdered them at the end of their stay with him, rather than selling them on to another.
So I see the potential for Lumen to get her OWN revenge on the remaining men who raped and tortured her. Clearly her twist is going to involve her own desire for revenge, and Dexter's response. Will he 1.) stay out of it and let her try to exact her own revenge; 2.) assist her since these frakkers certainly qualify for the Dark Passenger's special breed of justice; or 3.) remove her from the situation (for her own 'safety') and do the dirty work himself?
I don't believe that she has the skills to hunt and kill them all herself, so I would like to see option 2 come into play, with Dexter as a sort of mentor to her, but with Lumen still empowered enough to take her own revenge.

In the books, Dexter had a particular vengeance toward those who abused and murdered children, and he also went after those who didn't have a gender preference in victims. I wonder why the show has left that out to concentrate on violence against women? Because there's a higher, oh, acceptance level for that? Because it allows for sexualizing of victims? I'm really curious about this choice.

Don't forget that Trinity not only killed women who reminded him of his mother and sister, but he also bludgeoned men to death in re-enactments of his father's death and buried young boys alive. He wasn't like the Ice Truck Killer, who went after sex workers, or Boyd, who was part of that creepy rape-murder ring. He was equal-opportunity demented.

I was just about to post the very same thing. Equal opportunity demented.. I love it! I won't deny, though, that on the whole Dexter deals with a lot of female victims.

On somewhat of a tangent, my eyes were recently opened to the "helpless female to drive the plot forward" trope, and now I see it <i>everywhere</i>. Not only is it lazy writing, but it's an insult that women in film and tv are so often boiled down to a plot device. I honestly wish I could un-learn that trope, because it has nearly ruined some of my favourite shows and movies.

I think the show does push the tropes of detective show/murdered women narratives in that Dexter always reminds his caught killers of the atrocities they made, putting trinkets from or pictures of the victims in eyesight, playing with their emotions, and so on. I don't get the sense from <i>Dexter</i> like I did from <i>Law & Order: SVU</i> that the preponderance of murders are of women or prostitutes, but when those are the victims, we hear a lot of dialogue and inner monologue about why these crimes are so abhorrent.

What I didn't appreciate in this series was the second season's "crazy" antagonist/love interest, Lily Tournay. It was all kinds of stereotyping about unhinged artists, sexual freedom as boundary-less stalking, and the evils of the woman with automony. I think <i>Dexter</i> has been a lot more feminist in its portrayal of women since, bringing up sexual harassment in the workplace, how women associate with each other, the harm that male sexual aggression does to women (and I don't mean among the victims of violence), and this season I think we'll see an interesting exploration of victimhood/survivorhood and female agency. But then again, as I said over at I Fry Mine in Butter a couple of weeks ago, (http://ifrymineinbutter.com/2010/10/05/dexter-reimagined/) I'm enjoying this season so far.