Tube Tied: Parenthood and the Demise of the Nuclear Family on Television | Bitch Media

Tube Tied: Parenthood and the Demise of the Nuclear Family on Television 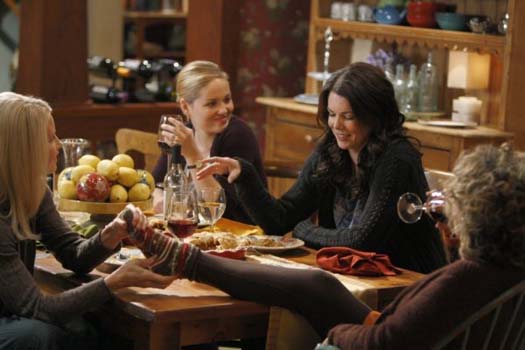 I'm probably alone on this one, but my secret obsession at the moment is NBC's completely milquetoast Parenthood, and I wish I could better explain why. The show is, of course, well-cast—I'd watch either Peter Krause or Lauren Graham pick their noses for an hour if it came to it—and has that patina of shiny Bay-Area bourgeois healthfulness, complete with artfully cluttered ranch houses and comfortable-looking, natural-fiber clothing and that "no-makeup" look. But dramatically there's very little about it I can recommend to you on a principled basis. It has basically no aspiration to any kind of social commentary whatsoever. (The show does make some gestures towards addressing disability—there is a child with Asperger's depicted on the show—but it is largely framed as how the parents coming to terms with the "tragedy" of having such a child.) But every Wednesday morning, it's the first thing I watch on my DVR lineup. It's soothing, somehow, like warm milk, bland and inoffensive, without challenge. In my overly cerebral, often quite stressful life, it doesn't demand much of me, and it's without the sort of shameful prurience one attaches to, say, certain guilty-pleasure reality shows.

It's got me thinking, though. It's actually true that many of the shows I've loved over the years are (a) family dramas; (b) featuring non-nuclear family structures (more on that in a second); and (c) set in the Bay area. Lately this preference of mine has manifested itself in an obsession with Parenthood but in the past I've found myself similarly obsessed with Party of Five (Matthew Fox will always be Charlie to me) and, God help me, in a younger and stupider stage, Full House. I can even sort of shoehorn Six Feet Under, a personal favourite, into this rubric, even though that was set in Los Angeles. I know they're sappy shows, sometimes made sour with incredibly bad child acting, and heteronormative as hell, in most instances. They were aimed at heart, not head, and this, my liberal arts education and years of hanging out with people who consider themselves artsy intellectuals, is somehow artistically just wrong. "Manipulative," I believe, is the term often used.

What these shows are manipulating, of course, is a fairly primal sort of impulse, or so it seems to me: the desire to have some kind of solid family structure to return to at the end of the day. In a former feminist age, the one of Friedan and The Feminine Mystique, you might have called that need something of an anti-feminist one. In that older rubric, after all, the "work" of holding a family together was often delegated to women—call it the "Leave It To Beaver" paradigm—and "family values" was something of a cover for "patriarchy." Angel in the house and all that, but the idea that there would be dinner waiting and Fido with the slippers in his mouth was what stood in, then, symbolically, for the comfort of family.

Some of that is still true, of course, and I don't want to minimize the degree to which women still shoulder the burden of "family values" in the world generally. But the interesting thing about a Parenthood or a Party of Five or a Full House is precisely that they take the sap, the idealization and the gloss and slap it onto family structures that are, generally, not based in the heterosexual two-person marriage. I don't want to exaggerate that observation—it's true that in all three of the shows I've just identified, there are married heterosexual couples floating around, and even sometimes central to, the family structure—but the idea is that family in these shows is not primarily defined that way. In fact, often the most important family relationship is that between siblings. In Parenthood's first half-season, for example, the marriage at the top of the family pyramid, between Zeek (I don't know what's up with that spelling either) (Craig T. Nelson) and Camille (Bonnie Bedelia) was in jeopardy, but at no point did the writing even venture the possibility that a divorce would bring an end to the strong ties between the siblings.

That focus on siblings is, I've come to realize, probably the emotional rub for me. Raised as an only child, I always longed for a big, noisy dinner table, and not having yet achieved it in my adult life, I make do with fictional versions. But the issue that focus raises, I think, can apply equally to the people who longed for less chaotic mealtimes: isn't it the case that these shows, which have, however blandly, redefined "family" to mean something other than one man, one woman, and 2.5 children, can have a sort of soft-sell progressive effect? And if so, does that make my love of them at least a tad less embarrassing?

you aren't alone, I love it to.

I LOVE this show. I think it is fantastic principle wise. Rarely do we see shows on TV that actually reflect real issues in marriages, relationships, and between children. Far from the drama of gossip girl and reality TV shows this show really shows what a family might look like. Have you noticed that most "families" in TV shows are manipulative, egotistical, broken, selfish messes? Parenthood shows the problems that families have but also the heart and the love and caring and sacrifice that people do for others they love. Plus is has a successful working mother represented as well as a low income mother living with her parents.

Parenthood might not have a ton of outward social commentary going on, but I think implicit in the show is some commentary on contemporary family life, and the way it can be messy and hard and frustrating. I like the fact that the characters are all imperfect. I like that there are complicated family dynamics going on, and that they show how several different kinds of families work.

Maybe I am just a sucker for Lauren Graham.

Also, I never would have thought to apply the term milquetoast to the show. It actually makes me kind of tense sometimes with all the yelling and everyone talking over each other all the time.

I agree with laura k--I don't think the show is bland and I do value it for how it treats the different relationships between the family members in very nuanced ways.

Also, maybe it's because it's late and I'm tired, but this post didn't make sense at times. You used milquetoast twice. And that whole example of Camille and Zeek not divorcing didn't seem to support whatever your point was.

Thanks for pointing out the typo.

This show is probably my favorite show on TV right now, yes it trumps the crack-cocaine addictive qualities of Glee, but I'm always really bothered by the problematic portrayal of Max and how his family reacts to him. While I'm happy a show would finally step up to show what life is like for a character with a learning disorder, but what upsets me is that Max's story is still being viewed through the eyes of the privileged characters. I recognize that the show is "Parenthood" and not "Childhood" so it is supposed to be through the eyes of the parents but I wish the show would've designed characters that won't so caught in how hard and sucky it is to be a parent of a child with aspergers. I'm not trying to trivialize how hard it is to have children who are handicapable or mentally different than others, but perhaps if parents learned to accept what joy it can be to have a kid that that is completely unique and different from other children. Asperger's mean thats as a human being I am gifted in ways that others aren't and capable of doing things others aren't, and I'm lucky that I have been gifted to be different! I'm glad I had a mother who wasn't a wet blanket like Kristina and celebrated "my weirdness" and encouraged me to own it so I didn't have to throw hissy fits like Max.

THANK YOU!!!
A dear friend of mine has two teenage children: I adore one of these children, and he happens to be the greatest source of joy in his mother's life. He is also a tremendous source of joy in my life.
The other teenager is, well, a typical teenager. A neurotypical teenager.Yuck!
From this wonderful young man with Asperger's I have learned: Asperger's is a difference not a disease.
I know it's very different from Down's Syndrome - but in both cases, people with their respective "syndromes" can be such great gifts to the world - not in spite of, but because of their difference.