Tube Tied: Towards a Feminist Theory of Superheroes: "No Ordinary Family" | Bitch Media

Tube Tied: Towards a Feminist Theory of Superheroes: “No Ordinary Family” 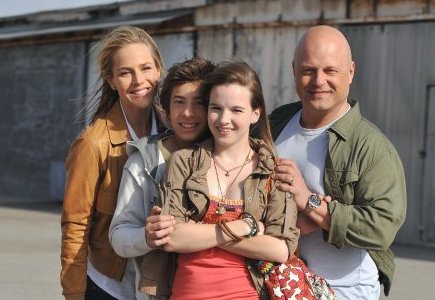 It's been an abnormally bad year for new shows—there are few I'm sticking with past one episode. But so far, I'm still watching No Ordinary Family, a little one-hour drama from ABC that will air its third episode tonight. The premise is fairly simple: distracted, over-committed modern nuclear family goes on family vacation. They get into a plane crash in the jungle, mingle with jet fuel, and voilà: superpowers. In other words, it's a sort of live-action version of The Incredibles. The show is pretty well cast—you'll recognize faces from Dexter, The Shield, and Weeds. (And, umm, Seventh Heaven, but I guess someone's trying to break away from typecasting so let's not rib him too much for that.) The dialogue is pedestrian, but not painfully so. In other words, it's not yet some kind of heir to Heroes or Lost—the pilot simply isn't as strong as either of those shows' was—but the rest could be.

What makes the show potentially interesting from a feminist perspective is that the superhero gloss on this show is not purely supernatural or even just epically oriented: so far, at least, it's partially being used as a way to comment on family dynamics. Although his strength superpowers do point, for example, patriarch Jim (Michael Chiklis) immediately towards a life of crime fighting, they compensate for his sense that he has somehow been a "weak" participant in the family as the stay-at-home parent (and a failed artist!). Working mom Stephanie (Julie Benz) acquires super-speed, which she seems to interpret largely as a way to enable her to be more present for the other family members. Son JJ's (Jimmy Bennett) learning disability—which has made him feel like, he says, a kind of lesser member of the family—is magically overcome by a suddenly high mathematical aptitude. And daughter Daphne (Kay Panabaker) can read minds, which helps her feel a bit more sure-footed as she navigates the social minefields of high school.

The tone of the show is nonetheless quite uneven, and it's difficult to tell at this point if it is going to get beyond these broadly cast observations (and frankly very abstractly drawn, archetypal characters) into some real allegory and depth. And there are, of course, some problems with the gendered framing of some of the characters' insecurities: why is the daughter only concerned with boys? Why does the show appear to agree wholeheartedly that a woman who focuses on her career is necessarily shortchanging her family? Must she near-exclusively devote her superpowers to being a "supermom" within the home while the father gets to self-actualize in the more "public" role of crimefighter?

As a result, I am thinking that No Ordinary Family is heading for the blunt ground of a regular superhero show. In the first two episodes it has devoted most of its energies to identifying an enemy for the season, rather than drilling down on the types it has set up. And there have been the sort of fight scenes whose mechanics feel like a certain kind of teenage boy might spend a lot of his time analyzing and debating with like-minded action scene devotees. (I offer no verdict on these; I'm not qualified.)

That's a shame, because No Ordinary Family's concept could, in the right hands, have been really smart, drawing an extended metaphor about the ways in which it is a Heraculean kind of thing, in modern circumstances to hold together a healthy family dynamic. Plain superhero stories are a dime a dozen—they vary in skill of execution, sure, but the formula is the comforting, though lazy, part of them, the easiest part to do well. But to do something that transcends another comic book story, to make human the people who have these superpowers, as opposed to getting obsessed with pyrotechnics and fight choreography, to me, anyway, that's the real challenge. It's that, in my view, that separates the Buffys and the Aliases from the pack of crappy supernatural shows that come and go each season. It's also, as you may have noticed by my choice of examples there, the kind of show that ends up with the best roles, the best depictions even, of women. The more a show's approach requires that characters are given full human status, the less women can only be onscreen arm candy to be plucked from suspension bridges at the end of the battle. But then, of course, that requires more careful work.

On a side note, I watched the first episode where the father yelled at his family as the plane was crashing into water to immediately inflate their life vests. If you find yourself in that situation, NEVER inflate until you've gotten completely out of the way. Once the plane starts filling with water, the buoyancy will drag you to the ceiling of the plane and keep you there, letting you drown if you cannot scramble free of the structure amidst the chaos and any resulting injuries.

I love when a writer compares something to a comic book as a negative, yet demonstrates in their writing that they actually don't know anything about them.

Much like television shows (and bitch magazine articles), there are comic books that lack depth or suck for various other reasons, and there are ones that don't.

It's a MEDIUM, like film or theater. Get over it.

I think Michelle was referring to television shows that have been based on comics. While I'm sure that there are lots of nuanced, interesting, feminist comics out there, the ones that we see adapted for TV hardly match that description.

Oh, and please don't tell Michelle (or anyone else) to "get over it." It's rude, and in this context it doesn't even make much sense since this post was about a television show, not about comics (I am assuming that when you said "it" you meant "comics"). Thanks.

It's amusing to me that you reference the Buffy series(es) in the last paragraph but Julie Benz gets no love for Darla :)

Same here :) I didn't particularly like Darla at first, but Julie Benz as Rita in 'Dexter' has made me appreciate her acting. Re-watching 'Buffy', I realized that Darla was far more of a feminist character than I perhaps gave her credit for initially.

I have only seen the pilot episode, but I liked it a lot. As a mother, a lawyer, and a wife who works longer hours than my husband and rarely gets to see my daughter during the week I identify with the mother in this show. It sucks to miss out on big parts of your child's life and I took her power (of speed, which enabled her to be "there more") as a balancing factor, to enable her to enjoy her life and her career. I really liked that the show had her as the main wage earner and a successful scientist and actually showed her handling her stressful life pretty well while the husband was the one who missed her company instead of showing her unable to handle a big career because of her "motherly instincts"

This looks like an interesting show about heroes with super powers, hope it doesn´t goes down the hill with a weak storyline like similar others. Will keep an eye waiting for an international release to check out.