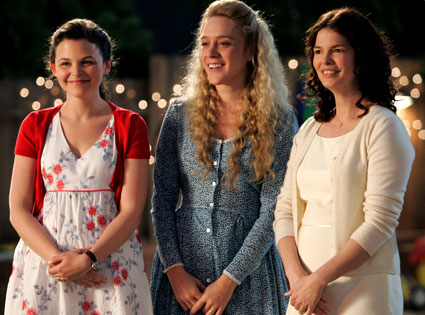 The creators of HBO's Big Love have just announced that the fifth season, which begins airing in January, will be the series' last. It's hard to greet this news with anything but relief; the last, abbreviated season of the show was something of a mess, with a subplots, I kid you not, about Mexican grindhouses and genetic engineering that exceeded any reasonable person's suspension of disbelief. But until that point the show was probably the all-time best case study I can think of for the phenomenon I've been trying to document in this space: the strange fact that the premise of any television show is almost irrelevant as the basis of any critique, because the key to doing a good job of depicting women is about execution, not playing to type.

Big Love after all, has pretty much the mother (ha!) of all potentially anti-feminist dramatic premises. The Henricksons' is not a world where patriarchy is implicit, or simply the product of social arrangements that have been handed down through the ages. It is one in which a very literal form of patriarchy has actually been chosen by the characters, even though other alternatives were available. The head of the family, Bill (Bill Paxton) has come actually kind of late to his firm belief in the righteousness of the Principle of plural marriage, after having been expelled from a polygamous compound as a young man. His wives, Barb (Jeanne Tripplehorn), Nicki (Chloe Sevigny) and Margene (Ginnifer Goodwin) are not constrained by law or social custom to agree with Bill on that point. Throughout the show, it's made clear that all three remain in the marriage willingly, although their own personal relationships to the Principle range from ambivalent (Barb) to largely emotional (Margene) to almost entirely inherited (Nicki).

This kind of show, obviously, treads a thin line. On the one hand, it's quite possible to watch it and come away feeling sympathetic about the kind of family arrangement it depicts. The family lacks most of the characteristics of the bogeyman polygamists you see every once in awhile on CNN. They live in modern houses; the women are free to come and go as they choose; the children go to regular public schools. Indeed, the show makes explicit contrast of the "modernity" of the Henricksons' lifestyle with the backwards compound at Juniper Creek where both Bill and Nicki are from. There is, in that framing, some kind of implicit sanction of the practice of polygamy, as though it were necessary to say that there is nothing inherent in the concept which requires that women silently trudge about in floor-length dresses and be married off at thirteen.

In fact, when I first started watching Big Love I resented the show for seeming so blasé about the entire thing. But then, and admittedly, it took quite a few episodes to get there, the show realized that it was never going to be able to fully sell anyone Bill's character. After the initial mistake on the weak Viagra subplot that was supposed to make us feel bad for the way Bill's wives overtaxed him sexually, it seems to me, the writers largely abandoned him to his delusions of prophetic wisdom. And they turned to the women, which saved the show.

Chloe Sevigny's depiction of Nicki has always been the standout in that regard. As the person in the family most like the cartoonish picture of the polygamist wife we are delivered by the mainsteam media, with her long French braid and full-length denim skirts, one expected Nicki, early on, to be the most passive and damaged of the wives. But in fairly short order she emerged as the firebrand of the lot, incandescently cursing out her older brother from the compound when he came to threaten the family, hiding her mounting credit card bills from an addiction to catalogue shopping, scheming about how to prevent a third pregnancy. And though it took some time to come, she too developed a highly complicated relationship to the Principle, becoming unsure about her position in the marriage as she got out into the wider world and discovered it was not quite as frightening as she'd been told it was as a child. Her initial defensiveness melts away, and we discover that she was even one of those child brides you hear about, though ultimately the match failed.

Here is the thing I find so revolutionary about this: I feel limited sympathy with the criticism that feminists are often too concerned about the way in which women are victimized. Often I do find such claims disingenuous, insofar as they seem to want people to stop talking about all the shit the world throws at women altogether. But there is a broader point to be made about the resilience and strength of women, even in these terrible situations. They retain, even under horrible circumstances, the ability to articulate themselves within the constraints of their situations. In short, they remain human beings. They aren't damaged beyond repair; they aren't things to be saved. They are, in other words, in small ways, trying to save themselves.

Big Love understands that. For that reason, I'm going to miss it.

I'm completely with you on being irritated by the blase treatment of the premise; I still am, actually. The fourth season, though bizarre, was good about showing the female characters' anger over Bill's chauvinism. (Also, I <i>loved</i> the storyline about Alby's secret relationship. A lot could be written about the show's approach to queerness.) Within the family, so much interesting mental material is hinted at -- Margie seems to retain some Catholic beliefs, for one -- that I've never stopped wishing all the characters would just sit down and explain what, exactly, they believe and why. Wouldn't make for good TV, I imagine.

As a feminist, the part of the show that has irritated me most, surprisingly, has been the treatment of Sarah. Having sex once as a teenager must lead to a traumatic miscarriage and young marriage, apparently. Her initial set-up in a tumultuous friendship with the secretly infatuated Tina Majorino could have turned out so much more interestingly. At least Sarah's marriage seems less patriarchal than her parents'.

Can't wait to see whether Barb follows through on leaving Bill. I'm really hoping so.

Your comment that the producers seem to have long ago given up on Bill is so dead on. I never fully let go of it myself and kept wondering why he had to be such a jackass, even now.

I'd be interested to see how many Big Love fans ended up watching Sister Wives, which I don't think could have been pulled off without the success of the former, particularly since the two have such a spookily similar storyline.

I would agree that this is the mother of all potentially anti-feminist dramatic premises, and for this reason I was at first unable to stop my judgments about the show. But, after thinking about it, I like the fact that this program gives something to the idea of "queering" the American family. After all polygamy is the most common form of marriage in the world. Also, I to find it interesting to think of how Big Love may have somewhat enabled the release of TLC's Sister Wives. It is great to see some other representations of the American family, but these are still those of the heteronormative nature. Hopefully we can someday have dramas or reality TV shows that represent more homonormative relationships. (or shows that have more realistic representations of homonormative relationships)