Longtime readers may already know of my love for Gossip Girl's Chuck Bass, and it's only grown since he started being the best boyfriend ever to Blair Waldorf this season. But last night Chuck soared even higher in my heart when he a) kissed a dude and b) was nonplussed as ever.

Okay, maybe the premise isn't entirely gay-powered. Blair's angling to give a toast at the freshman dinner (don't ask me why) and needs to get a gay school administrator, Mr. Ellis, under her thumb. She promises Mr. Ellis he can kiss her BF if he'll let her do the toast, but keeps that part of the plan a secret from Chuck.

Chuck expects to be seducing some woman to help Blair get revenge (it's a thing they do), but doesn't flinch when he sees that the target is a man. In fact, he rises to the occasion. (Cut to an American flag flying high over the Brooklyn Bridge. Oh, Gossip Girl. C'est pourquoi je t'aime.) When Mr. Ellis moves in for the kiss. Chuck clearly doesn't mind. Afterward, when Blair asks, "Are you upset because you kissed a guy?" Chuck replies, "I'm upset because I kissed somebody that wasn't you. Do you really think I've never kissed a guy before?"

And that's why I love it: Chuck has long been presented as a man who's only interested in women for sex, and only interested in sex with women. But when male partners are in the mix, the whole thing becomes less fraught and more interesting. Chuck isn't a "womanizer," he's a connoisseur of all things pleasurable. His character has officially moved on from stale-old philandering to unblinkingly subversive sexuality. It's nice to see Gossip Girl live up to its own hype as a show that scandalizes parents and sparks the teenage imagination. XOXO!

Yeah, but he also tried to rape two girls the very first episode.

No one ever seems to remember that.

Yeah, that was some lazy writing. They wanted Chuck to be a villain at first and did it by making him ridiculously despicable, then ditched the whole "villain" thing in general because morally ambiguous characters are so much more interesting.
Not condoning Chuck's initial behavior, just saying it doesn't connect at all to the character he's been for the past 2 seasons.

I just checked IMDB, and he just turned 21! It is old enough to take him to a bar -- not that anyone on Gossip Girl has trouble buying drinks. So I'd say that makes him a completely appropriate crush!
I wish that there was an episode where Chuck Bass had to pretend that he was some English dude, just so that I could hear Ed Westwick's native accent. The only thing hotter than Chuck Bass is Chuck Bass sporting a sexy British accent!

I saw "Chuck" and thought of /Chuck/ Chuck! How sad. Seriously, Gossip Girl is...kind of really terrible (this coming from their key demographic). I mean, just awful. Chuck, on the other hand, is a wonderful show. I promise. 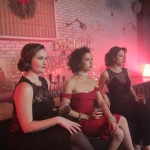 by Evette Dionne
Em & the Fates have been using a combination of live instrumentation, harmonies, and modern feminist lyrics to build a growing fan base.