A Vanderbilt football game in 2010. Photo by Larry Darling, via Creative Commons.

A rape trial began last week in Tennessee involving members of the Vanderbilt University football team. While our culture’s discussion of sexual assault can, at times, recede into vague generalizations and faceless statistics, this case, with its graphic video and photographic evidence, offers a horrifying reminder of the crime’s true nature.

The details of the case are terrible. To add to the trauma of the incident, the tactic of the defense team in the case has been to question the judgment of the victim. The defense attorneys are attempting to use the underage drinking of those involved (the defendants and victim were all under 21 when the incident occurred) to argue that the campus’s culture is responsible for their clients’ actions—not their clients themselves. On Good Morning America this week, the defense attorney pinned blame on “social media, that came in the way of television shows that glamorize and promote sexual activity” for creating a “culture of sex and drinking.”

While anti-rape advocates point to how our culture stigmatizes rape victims and diminishes the seriousness of sexual assault in numerous ways, it’s absurd to argue that people who rape are not liable for their actions because of the nasty culture around them. 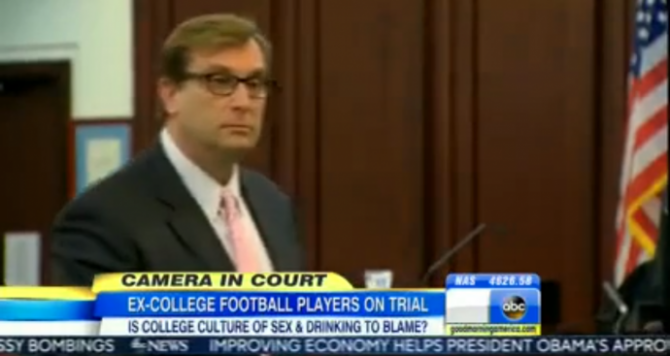 From Good Morning America: Is a college drinking culture to blame for rape? Nope.

The alleged rape, which occurred on June 23, 2013, involved four football players and one female victim. Surveillance video from Vanderbilt’s Gillette Hall dorm shows the men dragging the young woman’s unconscious body into a dorm room at 2:30am and then dragging her out again a half hour later. The four men are all charged with raping the woman, but only two—Brandon Vandenburg and Cory Batey—are on trial in this current case.

What took place in the dorm room, where Vanderburg resided with a roommate, has been pieced together from phone videos sent by Vanderburg to his friends in California, photos seized from three of the men’s phones, and the confessions of other two charged men (Jaborian McKenzie and Brandon Banks, each of whom is testifying against Vanderburg and Batey). Additional information has come from the testimony of Vanderburg’s roommate and teammate, Mark Prioleau, who was in bed pretending to be asleep during the whole incident, and two other football players who later found the victim lying naked in the dorm hallways outside Vanderburg’s room.

The video footage, which has been shared privately with the jurors, shows one of the men assaulting the unconscious victim—who is alleged to have Vanderburg’s girlfriend at the time—as well as calling her a racial epithet. According to police testimony, the photos taken from the men’s phones reveal at least two of them taking part in the sexual assault.

One of the four teammates who reportedly took part in the attack said it was Vanderburg who instigated the crimes, giving condoms to the others and instructing them to assault the unconscious woman. “He was amped, demanding,” McKenzie testified. “He was hyper, like he was coaching us.”

None of the three witnesses reported what they’d seen to the police or to any campus or team officials.

According to testimony, the alleged assailants and victim had spent an earlier part of their evening drinking at the Tin Roof, a local bar. Now, the defense team is trying to pin blame for the attack on the victim. On Good Morning America this week, the defense attorney said that “everyone made mistakes that night” including the victim. “She drank quite a lot of alcohol,” they said. To support their “campus culture” argument, the defense team points to the fact that no one called police or campus security, despite the fact that bystanders are observed in the surveillance video as her unconscious body is dragged into the room. This, the defense claims, means no one who saw the incident worried that the girl was in danger. As the Associated Press reporter who is attending the trial noted, “The defense appears to be trying to convince jurors that no one would have been concerned for the woman because it was commonplace to see students drunk.”

Such claims are repugnant, however. No amount of alcohol or “sexual promiscuity,” to borrow the defense attorneys’ term, could excuse or explain actions like those captured on the defendants’ phones. These men violated the defendant’s body and celebrated  doing so. To claim that the Vanderbilt campus culture should excuse such coarse, dehumanizing aggression is insulting to every sexual assault survivor. Attempting to rationalizing the commission of sexual assault through alcohol consumption is no different than blaming a victim’s assault on her drinking. Both arguments ignore the act itself, and the actor’s responsibility.

The police discovered the Gillette Hall surveillance video when looking into a report of vandalism. This accidental discovery has brought to light the gruesome details of this case.

The tireless work of activists, and the bravery of survivors sharing their stories, has helped raise awareness about the sexual assault crisis on college campuses. While a case like this is difficult to witness, it’s hoped that its facts will help increase the urgency felt around this issue. There’s a difference between knowing, statistically, that one in four college women experience sexual assault while in school, and knowing what happened to the survivor in this case, a difference between the idea that college men commit rape, and the facts of what Vanderburg, Batey, and their accomplices have allegedly done.

The ugly realities of campus rape are on display in this case, and no amount of hand wringing about alcohol or promiscuity can obscure them.

Leela Ginelle is a trans woman journalist and playwright living in Portland, OR. She contributes regularly to PQ Monthly and Bitch, and her work has also appeared in the Advocate. Follow her at @leelaginelle.

This whole case and the way it is being dealt with is appalling. And we wonder why rape in colleges is so under-reported. At the college I attended, I can safely say that I heard a number of similar stories from friends--most of whom never reported the incidents. One was drugged at a party and managed to get out before things got bad, and was told when she reported the incident afterward that she probably drank too much (she had one beer). Apparently similar reports were filed about the fraternity house it happened at, and the guys involved ended up talking about it to each other over their school e-mails...and it was brushed under the rug/nothing happened to them.
It all makes me want to go undercover and bust rapey frat bros. But then I'd have to go to their parties. *Shudder*

okay, no doubt, this defense it totally messed up, and rapists are not given a pass because no one stopped them, and lack of intervention in NO WAY makes rapists anything other than responsible for rape.

it does strike me though that the defense, accidentally, and with horrifying motives and in no way justifiably or understandably, managed to walk into a point worth considering: why did none of the people who witnessed this do anything to stop it?

there is no worst part of this story, it's pretty fucking horrible all around, but that is one of the things that jumped out at me while reading this: the defense is making an unintentional point here: what the fuck bystanders/witnesses? why did you stand by while this women was being dragged, unconscious into a room by a group of men?

Relevant: A New Documentary Explores Sexual Assault on Campus Through the Eyes of a Survivor