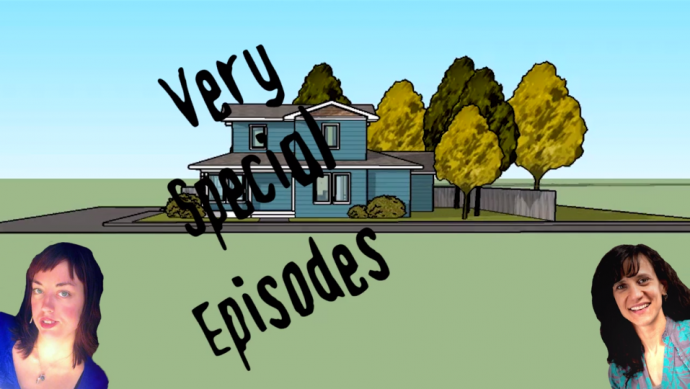 But not so with Very Special Episodes. In this new comedy web series, Caitlin Wood and Cheryl Green mock politically correct attempts to represent disability. For example, in the “Accessible Icon” episode, Wood and Green try to design an all-inclusive symbol to indicate accessible spaces—and representations of disabled people as inspirational. In the episode “Visit,” they are hilariously abrasive and rude. Very Special Episodes do not care to educate or inspire nondisabled people. Instead it speaks directly, candidly and humorously to people with disabilities about experiences they might actually recognize.
The project should come as no surprise from the two women. Caitlin Wood is behind Criptiques, the new anthology challenging normative ideas about disability (read our interview with Wood about Criptiques here) and Cheryl Green runs the documentary film and disability arts blog Who Am I to Stop It and the podcast Stories from the Brainreels. We spoke to Wood and Green about the series and asked them to share some great recommendations of who else is making game-changing media.

SABINE REAR: What was the inspiration for Very Special Episodes?

CHERYL GREEN: ​Disabled and non-disabled people have pretty much universally loved our earlier PSA called “Your Daily Dosage of Inspiration.” People seem to find that satire non-confrontational and useful. We wanted to make more media along these lines but with a few changes: to center the disability community as the audience​, to produce something very high quality, and to show really honest, provocative sides of disability experiences without being educational like the PSA sort of is. The series came out of discussions of the book Caitlin edited called Criptiques, and we realized that we could take the spirit from some of the essays in that book and create film. Also, we love comedy and wanted to add more ingroup disability comedy to the media landscape, producing work that doesn’t cater to people’s desires to see disabled people as either charity recipients or heroes and heroines. We got a grant from the [Portland] Regional Arts & Culture Council, and dived right in.

What makes Very Special Episodes different from other depictions of disability?

CAITLIN WOOD: First off, we’re not inspirational. We’re not there to make people feel warm and fuzzy about “overcoming” disability, which is the go-to depiction. We had zero desire to address the reasons behind our impairments and explain it to the audience to satiate curiosity. We just wanted to show two disabled women onscreen and present it as the norm, with no fanfare. We’re also kind of big jerks in the series, which is unusual! We thought it’d be fun to play characters that aren’t necessarily likable or easily digestible, which is very different from most portrayals of disability that you see. Disabled people are supposed to be sweet, plucky, and nonthreatening, and we’re none of those things.

GREEN: ​VSE is unusual in that it’s specifically cross-disability and fiction. There’s a growing body of disability documentaries; I’m even making my own, and it’s not cross-disability. But it’s much harder to find fiction.​ I hope that our shows come across like My Gimpy Life, a fiction webseries that does include cross-disability stories and cast. Sins Invalid put together a great, social justice-oriented documentary. ​I’m excited by media such as Abnormally Funny People, Lost Voice Guy, and Francesa Martinez in the U.K.; Nina G., Josh Blue, and Maysoon Zayid in the U.S., to give just a few examples. The late Stella Young’s TEDx talk about “inspiration porn” might be the best explanation for VSE.

What kinds of depictions of disability do you see in pop culture and what about these do you hope to address with your show?

WOOD: There’s a lot of inspiration porn and crip drag [nondisabled actors playing the roles of disabled characters]. This was especially prevelant during Oscars season. Disability is usually portrayed as tragic and pitiful, and something to be feared. You have to “triumph” over it, and you’re definitely not supposed to see it as an integral part of your identity. There’s usually not much else going on with the characters aside from having a disability. With VSE, we don’t directly address these typical depictions, but we thought the act of having two disabled women onscreen together was radical in itself. You just don’t see it that often. Or ever in pop culture. And we wanted to provide a counter example of disability portrayals without feeling like we had to reference all the many inaccurate depictions of disabled people you see in the movies.

Visit from Cheryl Green on Vimeo.

GREEN: ​It’s ​both interesting​ and troubling to me that so many people feel that “Visit” is satirizing a nondisabled person being patronizing to us. There might be some of that, but I’m not totally convinced that [the character] Carl is doing what he’s doing because we’re disabled. I’d also like to point out to folks that just because Caitlin and I are disabled does not mean that our artistic goal is to educate nondisabled people, nor does it mean that nondisabled people are our target audience. It’s a common thing that disabled people are supposed to do, and many accept the role, often for no pay. But as [autism activist] Jim Sinclair said, we are not self-narrating zoo exhibits. Not only are there extremely few representations of disability in the media and fewer played by disabled people, there is a pervasive belief that our community isn’t a valid audience or a market segment that should have media created for it. I want people to get excited about cross-disability art and media and to see disabled people acting.

WOOD: I think “Visit” is confusing for some viewers because they don’t know how they’re supposed to feel about us. Like, “Why are these disabled women being so mean to this guy?! Why did she steal his chips?” I actually don’t find Carl the landlord all that patronizing, more like terrified. If anything, I think we’re the assholes in the sketch, basically for no reason. I think people assume that there has to be an underlying message behind all of our short films, because disabled people are usually teaching nondisabled people important life lessons about the human spirit in movies. We’re not used to seeing disabled artwork that might be there just cause it was fun to create, especially something silly or strange.

What’s one thing you wish able-bodied people thought about when it comes to depictions of disabled people?

GREEN: ​I’m more interested in disabled people seeing ourselves in the media, recognizing that we are inherently capable of creating and contributing to culture, and that telling our personal story in a motivational speech onstage is not our highest possible contribution to society. This question is highlighting the ingrained notion that non-disabled people, or dominant culture in general, is our audience. We’re not doing one of those awkward moments campaigns that came out in the U.K. and U.S. recently from nonprofit organizations to teach nondisabled people to not be scared of talking to us in public. That’s not our message nor our audience. We’re making media and art. But if I could lecture to nondisabled media artists and audiences, I would hope that they all come around to recognizing that their interest in us as inspirations, pitiable things, or medical curiosities is super nasty and that they need to step aside and let us shape and present our own stories. I’m all for partnerships, and when nondisabled people have partnered with us without trying to teach us about our value and to keep a positive outlook on everything we can do, it works well. When nondisabled people repeatedly tell me what audiences want or what I absolutely have to show in my media work, I typically cringe. I’d like to have the benefit of the doubt that I know something about my target audience and that I understand how to shape a story for that group. It’s worth noting that it’s not just coming from non-disabled people. It’s generally straight, white, non-disabled men who tell me what my films are lacking and how I should teach audiences.

What were you actively trying to avoid in making your show?

GREEN: ​If we avoided anything, I would say it was avoiding letting nondisabled people make the shows. That was easy because Caitlin and I were simply in charge. We had help from our partners, but all of their ideas got the okay from us before being added to the project. As far as depictions, stereotypes, etc., there wasn’t any active avoidance. Caitlin and I would simply never do the stuff that we don’t like, so we just didn’t do it.​

GREEN: ​This episode was more of a satire of the way the universal access icon was recently redesigned and the resulting uproar over it. We were making fun of how seriously people are taking this debate as well as the fact that so many people seem to think the new icon is measurably better than the old one. Opinions on the new icon don’t fall neatly into “wheelchair users like it” and “people with nonapparent disabilities don’t.”

So I want to make sure viewers understand that Cheryl’s protest was only one of many, many protests being made against the new icon. If you look at the list of people on the Accessible Icon Project (the real redesign of the icon), you don’t see any mention of their relationship to disability except for one person being the child of a disabled parent. I happen to know one person on there, Keith P. Jones, and he’s disabled, though it doesn’t say that on their site. If there is no disclosure of people’s relationship to disability, by default, I’m assuming that these people are nondisabled. It’s a privilege nondisabled people have of not listing their relationship to disability—just as you so often see white people call themselves “just” people, and Black and Brown people are “people of color.” White seems to be considered the default form of humanity, and others have to label themselves, a notion I question.

We know in terms of disability that people nearly universally believe that disability is a deviation from the standard, and so we’re already other-ized. When you have a project like this, and you don’t have disabilities mentioned, I start to think, “Oh no, here it is again: Nondisabled people came up with a project and a fix for our community without having us in major leadership positions.” This is the biggest challenge: getting nondisabled people to step back, both with their notions that we’re incompetent and their notions that we need to see the ability, not the disability. What we need is access, inclusion, and equity. We need the accommodations we ask for and to be allowed to empower ourselves rather than have nice, helpful people come in to empower us. With proper accommodations in place for people who want and need them, we produce a lot of great stuff.

Woohooo! If you’re in Portland, Oregon, you can catch Caitlin and Cheryl speaking Wednesday morning at the Lewis and Clark Gender Symposium leading the workshop “Cripping Capitalism: Disability, Feminism and the Controversy of Work” at 11:30am. 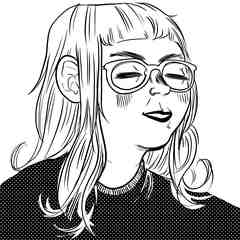 Sabine is a blind illustratrix, writer, and zine-maker based in Portland. OR.