(Note: This post contains spoilers about The O.C. and Degrassi: The Next Generation.) Allow me a moment of nostalgia—the late 1990s and early 2000s were excellent eras for teen dramas on network television. Buffy the Vampire Slayer and Freaks and Geeks were particular favorites of mine at the time, but most of the teen shows that aired around then—particularly those on the now-defunct WB—had their moments. One show I remember occasionally watching was The O.C., and what I remember most about it was the controversy surrounding a particular story arc—Marissa’s bisexuality.

I was aware of the storyline and the controversy surrounding it when it initially aired, but I didn’t watch the episodes until this week. And I was disappointed. Not only does it seem like everything was blown grossly out of proportion (sure, they kiss, but not any more than straight couples kiss on that show), the story itself is pretty underwhelming. Especially compared to similar storylines on other teen dramas, like Degrassi: The Next Generation, Marissa’s bisexual storyline is incredibly superficial and, frankly, boring.

It starts off okay. Alex (played by Olivia Wilde, who also played Remy “Thirteen” Hadley, another bisexual woman, on House) is introduced in Season 2 as a love interest for Seth, one of the leading men of The O.C. She has all the markings of a “cool” girl: high school dropout, works at a trendy concert venue, lives on her own in an apartment on the beach…and, as we discover in the midst of her relationship with Seth, she’s bisexual. Around the time Seth and Alex part ways, Marissa starts spending a lot of time with her. Their friendship is flirtatious, and the episode that depicts Marissa warming up to the idea of dating a girl is honest and sweet. Once the relationship starts, though, it all goes downhill.

From the beginning, the audience knows that Marissa and Alex’s relationship will fail. The premise of the show seems to be based around Marissa’s on-again/off-again relationship with Ryan, a main character, so no relationship she might have with any other person of any gender will be legitimate competition. But even with that aside, the relationship is doomed to failure because it isn’t treated with the same respect and sensitivity with which straight relationships are treated on the show. Almost immediately after they start dating, Marissa moves into Alex’s apartment. First of all, moving into an apartment with your significant other only days or weeks after starting a relationship doesn’t usually work out well. (Full disclosure: Sometimes it’s fine. It did work out well for me and my husband, but our situation is not what you’d call typical.) Second, Marissa’s characterized as overly privileged, so her main disappointments in her new living situation and, by extension, her relationship with Alex seem to be the fact that she has to pay rent and do basic chores like laundry and taking out the garbage. By throwing in these unrealistic and unnecessary obstacles, Marissa and Alex’s relationship doesn’t have a chance to ever come into its own. It fizzles almost as quickly as it begins, with Marissa missing her old life and Alex becoming overly and aggressively jealous of Ryan. It’s unfortunate, because The O.C. could have used this story as an opportunity to let Marissa explore her bisexuality and have a developed, interesting relationship with a woman. Other relationships on the show are given the space and time they need to develop, so the fact that the writers added so many unnecessary complications makes me think that they never intended to take the relationship very seriously. Which is disappointing. For a different (and, in my opinion, better) take on the bisexual coming-of-age narrative, let’s look at Degrassi: The Next Generation. In Degrassi, we meet a different Alex—Alex Nuñez. She and her friend Paige date on-and-off throughout seasons five through seven of the show. Unlike Alex and Marissa on The O.C., Alex and Paige have a real, complicated relationship that is treated as seriously as any other relationship on Degrassi. Sure, they fight over school, work, and the future, but their relationship isn’t only artificial conflict. They are given time to be truly happy together, and the love that they have for each other, even when they aren’t dating, is clear. And when they do experience conflict, it feels genuine. It doesn’t feel like a made-up reason to cause them to break up sooner—the positive and negative moments in Alex and Paige’s relationship just feel like the positive and negative moments that would really happen in a relationship between teenage girls.

I also love the matter-of-fact way in which Alex and Paige’s storyline addresses bisexuality. At the start of their relationship, Alex and Paige are both straight-identified; by the end of it, Alex is a lesbian and Paige doesn’t claim a specific label, but “bisexual” seems to be the right word, based on her attractions and relationship history. Paige’s coming-to-terms with her sexuality takes time, and due to the fact that her brother is gay, she’s hesitant to burden her parents by explicitly adopting a queer identity. But she knows the label of “bisexuality” is open to her, and she doesn’t resist it. On several occasions, other characters remind her, in no uncertain terms, that bisexuality is a perfectly valid identity, and one she can feel comfortable owning. This is a really powerful message to send to bisexual and questioning teenagers. Sadly, there are otherwise gay-friendly television shows that still have trouble with bisexuality, so it’s important that Degrassi makes an explicit and conscious effort to support its bi viewers. Had I been able to see a story like Alex and Paige’s when I was in high school, I’m certain my coming out process would have been much easier.

The O.C. is remembered for its controversial depiction of bisexuality—clips from the show are featured in Bi the Way—but it’s hardly the best television depiction of teenage bisexuality out there. Degrassi reminds us that there are other, better options, and that it is possible for bi kids to have realistic representations of bisexuality to look up to. Depictions like those on The O.C. may be more ubiquitous, but depictions like those on Degrassi are possible. Here’s hoping they become the standard someday soon.

I remember those episodes of the OC. I remember it didn't work out between marisa and alex because marisa was never truly bisexual. There were a few moments in the storyline where marisa would struggle with wondering if she could bring herself to be in a full on relationship with another woman. She wasn't sure if she wanted to let everyone know she was bi, probably because she wasn't. She was just experimenting.

Hmm...I'm not sure if I agree with that. Having just watched these episodes earlier this week, it's pretty fresh in my mind, and that's not how I read the situation. She <i>was</i> able to be in a full-on relationship with another woman -- they were physically and emotionally intimate, she told her best friend and her mother about the relationship, etc. The relationship had serious problems, but none of them seemed to have to do with the fact that Alex was a woman. Now, there are scenes where Marissa's mother says that it's just experimentation and a phase, but none of that is said by Marissa herself (unless she says something about it in an episode after the break-up -- I didn't watch past that point). Maybe she was just experimenting, but I didn't read it that way when I watched it.

First off, I'd just like to say that I like this article. I've never watched the O.C., but I have been a long time fan of Degrassi and remember watching with excitement and anticipation to see how Paige and Alex's relationship played out. There's just one thing I'd like to say: it always seemed to me that Alex identified as a lesbian before she began dating Paige. Although it is not said until after they break up the first time, she did not have any of the hang ups that Paige did abut dating a female. I could be wrong, but that's the way I always saw it when first watching the episodes and now when I see them again.

That's a good point. I know she dated Jay before Paige, but that doesn't necessarily mean that she wasn't aware of her interest in women during that time. And it's true that the relationship comes much more naturally to her than it does to Paige, at least initially. Thanks for pointing that out!

I love this series so far! I hope you will continue to write about bi issues, even after the series is over. There are so few articulate bi voices out there, it's important to have them as part of the conversation. I get tired of hearing about Dan Savage's take on bisexuals.

As a side note, you might be interested in Chloe, the movie starring Julianne Moore and Liam Neeson. I watched it last night, and it was a disappointing retread of the idea bisexuals are sex-crazed sex kittens. The previews had had me hoping for something more nuanced.

I found Alex's wardrobe as she got more and more "queer" pretty fascinating, too. Also, just generally Olivia Wilde and the portraits of bisexuality on TV -- House, etc.

I have serious affection for Degrassi and the Alex thereof. In the season before she and Paige started dating, it must have been, there was a storyline when she threatened to out Marco, her rival for the presidency of the student council, to the whole school. It makes me wonder about the sort of turmoil she might have been going through then, before she was a main character, that we never get to see, which may have laid the groundwork for the relatively easy time she has settling into a same-sex relationship compared to Paige. And I loved that Alex was cool with Paige being non-monosexual where the stereotype is that lesbians will always be nonaccepting of a partner's non-monosexuality. And I really loved that Paige refused all labels. Degrassi: it is the best. 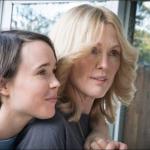 by Grace Manger
Ellen Page and Julianne Moore star in the film about a real-life couple fighting against homophobia.