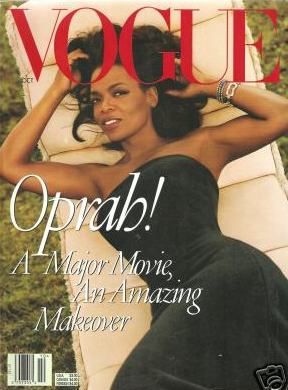 In 1998, editor-in-chief Anna Wintour made the "gentle suggestion" to Oprah Winfrey that she lose 20 pounds in order to be on the cover of Vogue. According to Wintour, Oprah agreed and went on a "stringent diet", resulting in one of Vogue's "most successful covers ever". Oprah was the first black celebrity to be featured on the cover. Read more gentleness from Anna Wintour after the jump.

With yesterday's news that Aretha Franklin was allegedly "insulted" by Jenny Craig's invitation to be their spokesperson, I can't help but imagine Anna Wintour giving the same weight-loss "advice" to the Queen of Soul. I'm gonna go out on a limb and say that Aretha would have had a slightly different reaction than Oprah did.

According to Entertainment Weekly, Wintour discusses her conversation with Oprah during an unaired segment of an upcoming 60 Minutes interview. Other soul-affirming quotes from the Wintour interview include:

One of things that makes me rather angry is that some people believe women need to be Photoshopped in order to look wonderful.

Calling people "little houses" pretty makes everything that follows sound like "blah-blah-blah-blah-blah", but I'll press on. I suppose the fact that there are entire industries that glorify the anorexic and seemingly-anorexic image couldn't possibly have anything to do with what "everybody focuses on."

<i>One of things that makes me rather angry is that some people believe women need to be Photoshopped in order to look wonderful.</i>

Sure, there's an obesity epidemic, but that doesn't mean anorexia isn't happening too. And it's awful.

Bitch,
Thank you for COVERING issues like anorexia. As a recovered anorexic and a white middle class lady I've known more anorexics than obese people. I'm not saying there aren't high numbers of obesity in this country I'm just saying there is ALOT of anorexia that is completely covered up, hidden, normalized.
Fucking As If, Ms. Wintour!

This is so true. Bulemia is also quite common amongst women of color, the fact of which is equally covered up. I'm a woman of color, but I suffer from anorexia...it's ridiculously hard to find good treatment because of it. No one takes it seriously.

Stuff like this makes me angry. Both obesity and anorexia/bulemia are treated as conscious, shallow (or negligent) choices which undermines their statuses as mental illnesses. Recovering isn't as simple as saying "lose weight" or "eat a sandwich".

no wonder the issue with Michelle Obama on the cover was the first one I've bought since the 80s...

I like my Anna Wintour in the form of Wilhemina Slater on Ugly Betty, thank you very much.

Also, do you think anyone will ever call Oprah out on her eating disorder?

I think Oprah has done that herself hasn't she?

I mean, it's Oprah. Vogue could have put her on the cover wearing a clown suit and pretending to snort Spaghetti-Os and people would still have bought the issue. Her weight had very little to do with it. And gee, thanks for choosing to "put it kindly" that you think everyone in Minnesota is a fatty boombatty. Just go away, and take your stupid fashion layouts with you.

She's such a fur hag! She doesn't care that animals are anally and vaginally electrocuted and skinned alive she just keeps promoting it. For women and for animals, she's heartless!

It's sickening that someone like Anna Wintour is put in the spotlight to be "revered" in the fashion world, when she's actually a very boring, typical fashion whore. The biggest indicator of her lack of soul and dull clinging to outdated traditions would have to be her pimping of the fur industry, when she knows the animals used to make her look garish suffer horrific lives and violent deaths. I passed her on the street in NYC recently - she looked so unhealthy and gaunt, slouching under the weight of too many designer labels, and surrounded by security as if anyone outside of the over-priviledged cares who she is... Gave her a big ol' eyeroll. I'd rather see Oprah at any weight than this anorexia-pumping, fur-pimping wretch.

The debate still goes on as to whether or not that was actually Wintour herself portrayed in the novel the film was based on. Having seen the film and read the book, I say definitely.