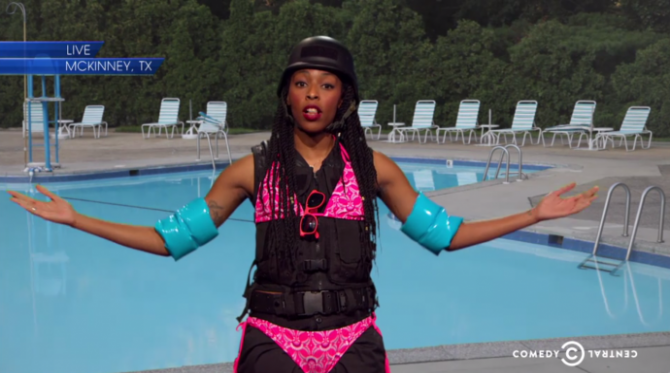 On The Daily Show last night, comedian Jessica Williams discussed the recent incident where a police officer in McKinney, Texas grabbed a 15-year-old Black girl at a pool party and slammed her into the pavement. The police officer involved was caught on video grabbing the teen as well as waving his gun at a group of unarmed teens who watched it happen. After the video went viral, he was placed on administrative leave and the police department is investigating what happened.  The incident brings to mind both recent examples of police brutality as well as the contested racial history of America’s pools and sparked a protest in McKinney that hundreds of people attended last night.

“Are these things happening more and more or are we just seeing them more because of cameraphones?” asked Jon Stewart. “I don’t know, but either way, this incident is progress,” said Williams dryly. “A cop pulled a gun on a group of Black kids and nobody’s dead.”