We Hope Asher Roth Gets His Wish | Bitch Media

We Hope Asher Roth Gets His Wish 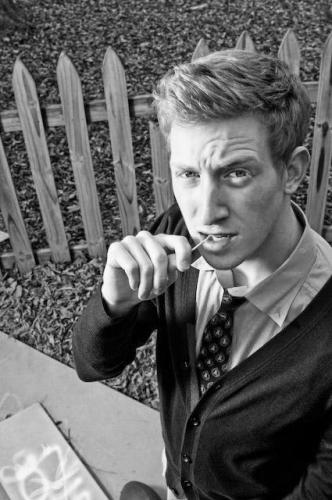 Malori brought us all up to speed yesterday on the Asher Roth phenomenon, I thought I'd call everyone's attention to point out that his new video, for the song "Be By Myself," only digs himself a deeper hole for anyone hoping to see anything other than a spoiled frat boy in the young pop culture phenom.

The video (which you can find here, if you're interested, though the content is potentially offensive enough that I won't repost it) features a host of bikini-clad women being covered with buckets of viscous white paint, most of which ends up on their faces.

And in case you're inclined to give him the benefit of the doubt, Roth's rhymes don't exactly help.  Claiming he doesn't want to be tied down, Roth expresses a preference for cheap, fast sex with the closest available woman (literally, the "girl in the front"), unless he want to sit around and watch him "get fat... smoke weed and rap, and play Madden."  Fun.

In the end, it's not that Roth is any more misogynist than many other guys in hip-hop, and I think there's more than a hint of racism in holding Roth to a higher standard than a lot of black or latino rappers.  Still, Roth's cluelessness is insufferable, and to see him sail to success using the novelty of his own suburban upbringing and pale skin tone -- even in the face of lackluster flow and weak rhymes -- is quite frustrating.

I hope he gets his wish and finds himself all alone sometime quite soon.

i think there's a bit of racism involved in discussing this guy in the context of hip hop at all. there are few if any genres of music that don't feature a lot of misogyny. and hip hop is a broad genre encompassing many subgenres, so you'd have to compare it to say, rock, which is so so so misogynistic. the whole idea that hip hop is full of misogyny glosses over the fact that our whole media culture is full of misogyny, and it is no more or less present in hip hop than it is in painting or rock (as i said) or classical music, or performance art or tv commercials. the attention hip hop gets for being misogynist is a symptom of our racist culture.

I agree with @al loof . . . . there's been some great posts on this, and I think Latoya's over at racialicious.com is the best. One of the blogger's she quotes seems to have a lot of smart stuff to say at his site - http://socialsciencelite.blogspot.com/2009/04/asher-roth-is-anti-white-g...

What I really appreciate in rap that it gives the opportunity to get rid of that chastooshka in the song, so that the song becomes precious with its sense.
Asher Roth? Asher Roth is not Eminem and "Be By Myself" is definitely not as strong as ANYTHING on The Greenhouse Effect. But I believe he's talented. Keep going Asher!