Webcomics: Entertainment for the New Millennium

Independent webcomics are, generally speaking, a lot more interesting than the comics you can read in the newspaper – they have the space and the freedom to experiment artistically and tackle controversial or niche subjects, and women aren’t as underrepresented. Here are just four current comics written and drawn by women that are worth checking out. Got one you love that you want other readers to know about? Leave it in the comments section! DAR (Erika Moen)
Autobiographical comic strips are hard to do right, but it helps when the autobiographer is unflinchingly honest, consistently funny and totally badass. The earlier DAR strips are more conceptual and artsy (and beautiful), then about midway through it becomes more straightforward autobiography tempered with poop jokes. Hark! A Vagrant (Kate Beaton)
Canadian cartoonist Kate Beaton’s brilliant webcomic (previously featured on our fall 2008 Bitch List) specializes in fictionalized or nonsensical tales of historical figures both famous and obscure. Occasionally these involve complex jokes requiring solid background knowledge of, say, the history of Newfoundland; also mixed in are autobiographical tales, tongue-in-cheek Darcy fanfics and crudely-drawn single-panel cartoons that are like Natalie Dee but way funnier. Where else can you find queens, kings, pirates, prime ministers, saucy mermaids, Shetland ponies, Pope Action Comics and a healthy dose of Mountie humor all in one place? Thanks, Internet (and Kate Beaton).

23 Comments Have Been Posted

There are also a decent amount of webcomics written by men which depict women as normal and real, not a stereotype or a bullet-bra'd sex-object.

I wanted to highlight female authors in this post, but you're right - there are definitely a lot of webcomics by men that feature great female characters. Thanks for the suggestions!!

LOVE Kate Beaton so much! Hadn't heard of the other ones so I'm thankful for this post considering web based comics are one of my greatest pleasures in life. Also, I definitely second Lucy Lou!

Rene Engstrom is an incredibly talented storyteller with well-developed characters and a simple but lovely art style. She is also an all-around awesome person. http://anderslovesmaria.reneengstrom.com/

Most of Jess Fink's work is NSFW, but check it out when you can; you won't be sorry. I just don't even know what else to say about it. http://jessfink.com

Rebecca Clements's strips may look kind of cutesy at first, but they are almost always thoroughly and genuinely funny, and the cutesy style is actually represented through some real artistic talent and imaginative abilities of which I will forever be jealous. http://www.kinokofry.com

Beware artists: Tracy Butler will probably make you hate your life. Her strip centers around a '20s speakeasy run by some very interesting characters. Never mind that all the characters are cats; this is one seriously excellent and well-researched strip. http://www.lackadaisycats.com/

Is Jennie Breeden of <a href="http://devilspanties.keenspot.com/">The Devil's Panties</a>. Semi-autobiographical, she says all those things you think. Absolutely hilarious and fun. : )

These recommendations are great! I also want to give praise to Julie McGalliard's long running series <a href="http://www.gothhouse.org/index.php">GOTH HOUSE</a>.

These are pretty good comics, but yeah, I was disappointed YU+ME by Meg wasn't on the list since none of these have lesbian characters.

Then you clearly haven't read either Dar or Girls With Slingshots.

Not Dar, but I do read GWS.
I'm saying main characters.

Erika Moen is a queer lady who just happens to have fallen in love with a man (as she more or less stated once.)

I just read all of DAR. Loved it, but still, I was surprised YU+ME wasn't on the list. And I second the comment saying that she is just a queer lady who married a man, which, as a bi girl, I'm totally cool with. But I like seeing representation in fictional comics also-- It makes me feel like it's a bigger step to making homosexuality become more accepted. That's just me though.

aaaaugh, there went my entire evening! I just read over a year's worth of girls with slingshots and it's fabulous. thanks for the additions to my <strike>procrastination</strike> webcomic feed!

Veeeery surprised Rene Engstrom wasn't mentioned here. But I do adore these four.

I second the surprise that Rene isn't on this list. Isn't Anders<3Maria pretty obvious?

This is by no means a complete list! I will be doing another webcomics roundup soon that will include A<3M and more of yall's suggestions.

Cat and Girl by Dorothy Gambrell!

Girls With Slingshots is quite good, but it has some shitty jokes as well, like finding a dead prostitute under a hotelbed as the punchline of a strip.

Thank you so much- ever since reading this post i have fallen in love with Girls With Slingshots :)
Most comic strips are the boring setup>setup>setup> punchline where nothing ever really develops- but watching Hazel, Jamie, and the crew go through life and change in a humorous, compelling story plot is addicting.

Thanks a lot for the post I've been waiting so much.Kate is my hero. I've read an interview with Kate Beaton and I enjoyed her thoughts about the Webcomic Scene:
"The worst thing most people can do making comics is try to make themselves look cool! The internet is a safe haven for a lot of sort of autobio comics about dudes being awesome, hanging out, and saying witty things back and forth. They are also supposed to be funny, but the majority of these are awful, of course."
<img src="http://www.culturemagazine.ca/images/stories/power_march2009/tshirt%20cr... 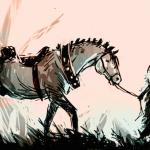