Television stations in the US are required by FCC regulations to have a minimum of three hours a week of “educational programming” aimed at children. This actually began in the ’90s, and initially television stations met the requirements by having little life lessons tacked on to their various cartoons. Some of you may recall very peppy “Sailor Moon Says!” segments, or “Knowing is half the battle!” from G.I. Joe. Other “edutainment” shows baked the lesson right into the text, such as Captain Planet and the Planeteers (pollution is bad, environment is good, go Captain Planet!) and Where on Earth is Carmen Sandiego? (geography and fighting crime!). More recently, FCC regulations have tightened up a bit, and shows need to do a bit more than say “Drugs are bad, m’kay?” to quality for an E/I rating, but we still have a good decade of important “educational” cartoon shows to look at and consider the life lessons we’re to learn!

So, what can watching cartoons teach us about people who are crazy? Oh, lots of fun things!

In general throughout this series I’ve tried to stick to depictions of crazy ladies across various media types. However, cartoons in the ’80s and ’90s were gender segregated (girls get ponies, boys get robots!), and thus this list is very male-character dominated.

Summary: “I am the terror that flaps in the night!” A Disney send-up of various superhero tropes,
Darkwing Duck’s titular character fought super-criminals while raising his adopted daughter and trying to juggle his other personal relationships. Darkwing fought crime and looked stylish doing it. The TV Tropes summary is pretty awesome.

Crazy character: Quackerjack. Quackerjack is described as an insane clown or a crazed toymaker. He cackles “insanely” before committing his various crimes, which he often does at the behest of his “talking” doll, Mr. BananaBrain. He apparently used to be completely sane, but then his company was driven out of business by the success of video games. (“Don’t play video games, kids, they’ll rot your brains.”) He’s violent and can’t be trusted.

In the episode “Stressed to Kill,” Quackerjack teams up with another crazy Supervillain (Megavolt) to disguise themselves as psychiatrists. As “Doctor Heebie” and “Doctor Jeebie” at the “Stressfree Clinic”, they use parodies of pop culture therapy to prove that Darkwing is tense and just needs a jolt from their “Relaxotron” for help. This renders Darkwing unable to fight their crime spree.

See also: Megavolt (who wants his light bulbs to run free with their wild light bulb brethern) and NegaDuck (who is a violent “maniac” just for fun).

Summary: The Warner Brothers and Warner Sister, Dot. “Just for fun we run around the Warner Movie Lot! They lock us in the tower whenever we get caught! But we get loose and then vamoose and now you know the plot!”

Crazy character: Are Yakko, Wakko, and Dot supposed to be crazy? I keep waffling back and forth on this one. They’re described as crazy and insane in some places in the show, and in other places just “zany.” What I’m more interested in is their time with Dr. Otto Scratchansniff, who is supposed to make them less “zany” or crazy or whatever.

Dr. Scratchansniff is another example of a therapist parody. Like many of these fake therapist, he has a thick faux-German accent (Dr Heebie & Dr Jeebie do as well). With the Warner Siblings, we see him do faux ink-blot tests, talk therapy, word association, art therapy, and puppet therapy. Often the end of sketches comes when the Warner Siblings have made him “crazy”.

Crazy character: Galvatron. He’s the leader of the Decipticons, and has been driven insane by being stuck in a pool of plasma. (I personally think being tortured repeatedly by Unicron in the animated movie didn’t help.) He’s violent, he attacks his own side in battle, he refuses to make plans because plans are for the weak. He’s the biggest liability for the Decipticons, but they can’t get away from him because who knows what violence he’ll unleash upon anyone who betrays him?

In the episode “Webworld,” the Decipticons decide that something must be done and are tricked into sending Galvatron to the therapy planet Torkulon. Tuorkulon is your typical pop culture asylum, with the inmates kept in cages and repeating nonsense to themselves, “drugs” (in the form of electronic control) that keep the inmates from doing much of anything, inmates tied to their beds, talk therapy (“kill, smash, destroy, rend, mangle, distort”), art therapy, some sort of scream therapy, and a lobotomy. Ultimately Galvatron’s madness infects the planet itself.

Summary: Hamlet as performed by Lions.

In and of themselves, these shows are relatively harmless. I’m not concerned that kids will grow up thinking that gravity doesn’t work if you don’t look down, as in the old Roadrunner cartoons. However, in these shows we see a lot of the same tropes we see writ large in media aimed at adults. Quackerjack talks to dolls because he’s crazy—just like Dru in Buffy. Crazy=violent, just like in Single White Female. Therapy is relatively useless, as it is in many other shows. Asylums are inherently violent and always depicted as frightening. Crazy people can’t be reasoned with, they can only be dealt with.

Yeah! That was my first thought when I saw the title. I'm sure there are dozens of other examples though... it's a really common cartoon trope!

ALSO I just thought of Who Framed Roger Rabbit... Both Roger Rabbit and the murderous evil guy who turns out to be a cartoon are portrayed as insane, and I think there is definitely an expectation that cartoon characters are insane or "zany" as the Anamaniacs were called, and those lines (whatever they are) are blurred.

I thought about including Roger Rabbit because of the final scene with the murderer "who talked JUST! LIKE! THIS!" but I wasn't sure if I could argue that movie was aimed at kids.

As for Freakazoid.... *hangs head in shame* I've never seen it. It didn't come on the air until I was doing my "I'm above all cartoons that aren't Darkwing Duck" thing.

I also thought about including The Tick but I suddenly couldn't remember any of the details of the show. I had actually forgotten the Tick allegedly escaped from an asylum until someone reminded me.

I think you're right about the blurring of the lines. Are they "zany" or "crazy"? I think you see the same thing with "manic pixie dream girls" - are they crazy or are they just quirky?

I would be interested to hear your take on Degrassi, AKA the Longest Running PSA ever. Every kid ever on that show deals with something hugely dramatic (and usually at least 10 things) and right now there's a character who is dealing with mental illness (Eli) and several years ago there was Craig who was bipolar, and I think in general, other than being teen-soap-opera over-the-top, I think they do a good job at portraying mental illness even handedly and the characters are sympathetic. However, to do so you'd have to sit through dozens of Degrassi episodes and I don't know how much patience you have. I still watch and know that it's not very good anymore... and I am in college so I'm way older than the characters, but I just can't stop watching.

Rafiki was 'crazy' too but he knew what the. . . he was doing and was one of the 'good guys'

I never saw Ed as crazy, more like he had a developmental handicap. He always came off to me as having the mental capacity of a very young child. I never saw him as an evil character, just that his caregivers happened to be the other two hyenas and he would go along with what they were doing, probably not even completely aware of right and wrong. As a kid watching the Lion King, he would remind me of my cousin who had severe mental retardation. I don't mean in an offensive way or anything. But maybe I was wrong about him.

Oh and there is also Pinky and the Brain. The theme song states "One is a genius, the other is insane." People will argue over which one is the genius and which one is insane because Brain always wants to take over the world and Pinky, who appears to be unintelligent, tends to figure things out or make suggestions that are usually correct.

Relevant: The Future of TV is Online 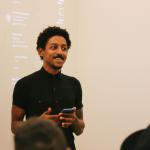