How I Learned About Feminism From American Girl's Felicity | Bitch Media

How I Learned About Feminism From American Girl's Felicity The American Girl company leaves many feeling torn between its promotion of pricey consumerism and the dolls’ celebration of history and education. One thing is certain though, the story of Felicity and her horse Penny is one that offers hope to the suburban girl—the horseless girl with a wild heart.

As a girl I wasn’t particularly aware of the consumer culture surrounding the company. I knew that there were dolls and accessories, but didn’t have any. But I did read the American Girl line of Felicity books—mostly, I skipped around to the horse parts.

In the Felicity story, the Colonial Era girl sneaks into the night to rescue an abused horse. The horse lets Felicity ride her because they seem totrust eachother and Felicity names the horse Penny—short for Independence. From the start, their relationship seems charmed. Having already learned that often in horse stories, good things end badly, I longed for narratives that have a happy ending for a girl who is independent and dedicated. That’s what happens to Felicity.

I think this begins to speak to why girls without horses might be so attracted to cowgirl narratives—because many are. Across race, class, and culture, the grander possibilities present in these narratives are enticing. At the beginning of the series, Felicity does not have a horse. She’s busy navigating her mother’s attempts at training her to be a “good” housewife. But as soon as she sets eyes on Penny, the abused horse belonging to the series villain Jiggy Nye (what a name!), Felicity is drawn to the mare. No matter what relationship the two forge however, the horse does not belong to Felicity. When Penny’s terrible owner Jiggy Nye is imprisoned, Felicity’s grandfather manages to find Penny and buy her, surprising the girl. Though this narrative relies heavily on privilege, it is still a story about overcoming obstacles, of girl being able to have the connection she wants with a horse.

I loved that Felicity was celebrated for her independence, refused to ride side saddle, and wore men’s breeches because they were more comfortable. Felicity and her best friend don’t talk boys or shopping, they talked politics. She wasn’t consumed with being a lady or learning etiquette but had other things going on in her life, primarily Penny.

The spunky Felicity continues to be rewarded in the series. Upon being reunited, it’s discovered that Penny is pregnant. Not only does Felicity get her beloved Penny but she gets a foal from the mare as well. The good fortune seems to be boundless for the girl despite the larger political trials in the story. This is a horse-crazy girl’s dream come true. Her love of horses is so palpable, so true that everything revealed itself—the horse, the freedom, the relationship.

Though now as an adult, I find it difficult to look past the series’ heavy ties in consumerism—the dresses and tea sets, dolls and hats—the story itself presents something important to all girls: the sense of possibility. So while in real-life only a girl whose parents have money can buy a real horse, this is not so in the elicity books or in most cowgirl narratives. In these stories, the girl often starts with nothing—like in Wild Hearts Can’t be Broken—and it is not just any horse or any girl. In Felicity and these other cowgirl stories, the heroines earn their horses through hard work, bravery, and strength. While they’re clearly a bit unrealistic, this type of story suggests that women can change their lives. One day, Felicity tells us, you can carve out the life you want for yourself, you can have your Indepedence.

thank you for this article. I loved loved loved Felicity when I was a little girl. I read many of the other girls series but she was my favorite. The American Girl series is definitely where I learned about feminisim but I didn't know that word then but what I did know was this girl (yes! A girl and someone my age!) was brave and strong no matter what others told her she was suppose to be like....and I could be too.

Not only consumerism, but all the American Girl products are made in China...
~MS

Totally forgot about these! I had all four. Love it.

Relevant: How Will "Tampa" Change With Harmony Korine at the Helm? 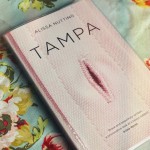 by Vanessa Willoughby
The controversial book about a woman who's a ruthless sociopath is becoming a film. But it would have been interesting to see a female director get the job of adapting it for screen.