What Happens When a Teen Girl Leads a Post-Apocalyptic Society? | Bitch Media

What Happens When a Teen Girl Leads a Post-Apocalyptic Society? 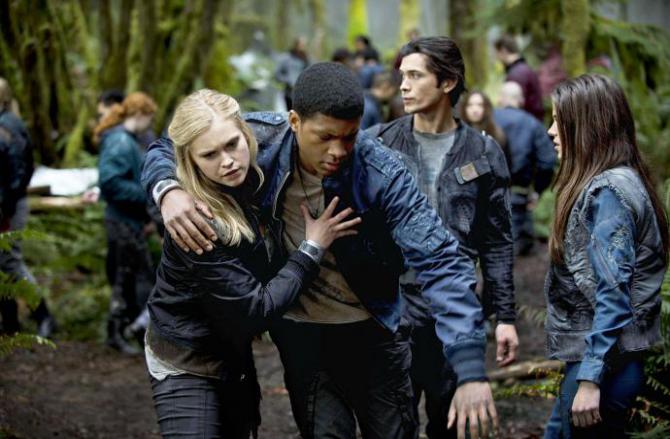 In The 100, highly competent teen Clarke (Eliza Taylor) carries the weight of her friends’ lives.

Typical post-apocalyptic television narratives are not a place for justice. Shows like The Walking Dead, Dominion, and Falling Skies focus on masculine-driven stories, telling us that when the world goes to shit, there’s no time for negotiation, it’s all about shooting first and asking questions later.

That’s why it’s so refreshing to see the CW’s teenage sci-fi drama The 100 taking a different approach to post-apocalyptic life. The 100, based on a book by Kass Morgan and currently in its second season, took a while to really get going. But once it did, the show is a surprisingly feminist take on the apocalypse. The 100 treats violence as a question, not a foregone conclusion. As its characters struggle to survive in a harsh reality, they ask: Is violence truly inevitable? When the end of the world happens, who gets to be in charge, and what should that look like? What if that power was placed in the hands of a teenage girl?

The 100 starts a century after Earth was nearly destroyed by nuclear war. The last remaining humans are aboard a space-station called The Ark, biding their time until radiation on Earth reaches tolerable levels. Their limited resources create a need for strict population control, which means all crimes committed by adults, no matter how small, are punishable by death, and all crimes committed by minors result in a trip to prison. One of these teenage prisoners is Clarke Griffin (Eliza Taylor). As the show begins, Clarke is pulled out of lockup and put aboard a ship along with 99 other teenage prisoners. The Ark’s Chancellor, Thelonious Jaha (Isaiah Washington), along with his Council members Marcus Kane (Henry Ian Cusick) and Abby Griffin (Paige Turco)—who is also Clarke’s mother—send these prisoners to the irradiated surface of the Earth. There are two reasons for this: They need to find out if Earth is livable and they need to preserve what space-station resources they have left.

From the get-go, the show positions Clarke and Abby as determined and reasonable women who are up against trigger-happy, power-hungry men. As soon as the kids hit the ground, the boys start taking charge and acting recklessly. On Earth, several boys among the landing party see power and violence as their right and their duty, shooting guns into the air and starting a bonfire. But Clarke calmly and efficiently makes a plan, setting up an expedition to look for supplies. Meanwhile on the Ark, Abby, a doctor, desperately tries to save the Chancellor from dying of a gunshot wound. She uses more than the allotted resources in order to keep him alive, and Councilman Kane sentences her to death.

“I choose, at every turn, and at any cost, to make sure that the human race stays alive,” he says to Abby.

“That’s the difference between us,” she answers. “I choose to make sure that we deserve to stay alive.”

That, in a nutshell, is the central conflict of this show. The women and the men have the same goal: save the group. The men do it by seizing power, seeing themselves as protectors of the women, and viewing all outsiders as enemies that should be destroyed. The main female characters are trying to do something larger—they seek justice, rather than self-preservation. When a problem arises, the men get out the guns and charge ahead. The women prep the guns, but first they think through all the factors. 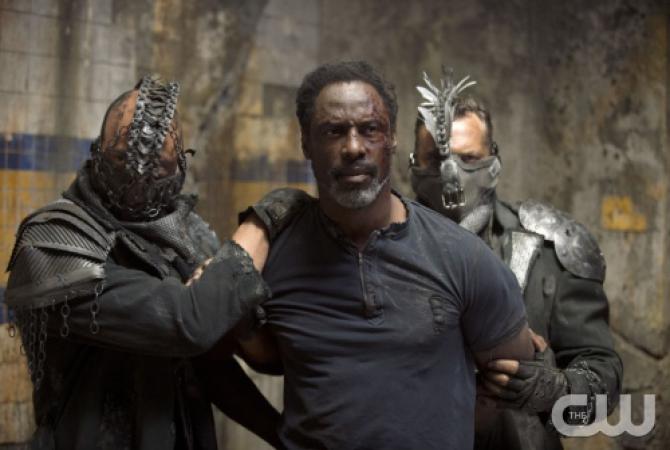 As Councilor Jaha (Isaiah Washington) finds, life on Earth is no fun.

The show could have explored these differences while keeping the men and women in traditional power roles: let the men think they’re in charge, let the women be the necks that turn the heads. That’s a story I’ve seen time and again, and after all, that’s what happens to Abby in the pilot, in which Jaha saves her life at the last minute, keeping her alive while preserving Jaha and Kane’s positions of power.

But The 100 does not stay on this route. Gradually, Abby and Clarke step into true leadership positions. Clarke’s levelheaded reactions and well-thought-out plans bring respect from the other teenagers. Over the course of the show, her leadership develops organically; other people listen to her because she is smart and she cares, not because of any show of power. As for Abby, she eventually assumes the role of Chancellor, along with the full responsibility of making good decisions for her people.

But leading the group gets even more complicated once they realize they are not alone on Earth. There are clans of “grounders” in the forest and a remnant of “civilized” humanity housed deep in a bunker called Mount Weather—not to mention the reapers, feral people with a taste for human flesh. As Clarke and Abby navigate their new reality, they struggle to make moral decisions that will keep their people safe. They aren’t perfect leaders, but neither do they break down in tears or tell people to follow their hearts. They make tough decisions, and they are willing to kill when necessary, but always, always, they are looking for a better way. Through various trials and travails, the show crystallizes its morality: people who see human lives as expendable are the true villains, no matter their rank or intentions. 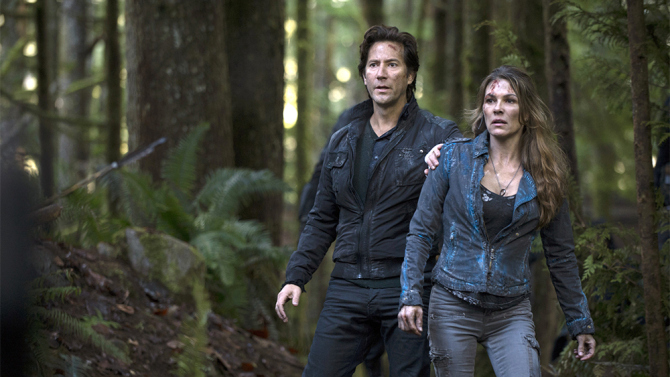 In the show’s most tense moments, the male leaders of the group lean on Abby and Clarke to make decisions that will ensure their personal survival—abandoning dozens of others to certain death.  In many sci-fi shows, if an embattled group of survivors were stuck with no good solutions, they would fix the situation with a heroic and near-impossible act of violence: blowing up the Death Star, for example, or assassinating the enemy’s leader. But when they’re between a rock and a hard place, Abby and Clarke think like healers instead of warriors and manage to find a third path: a truce, a negotiation, a way to help the people they fear rather than just slaughtering them.

When the do feel forced to resort to acts of violence, Clarke and Abby clearly feel horrible about the consequences. At one point, the group has to walk through a field of charred skeletons, the bodies of 300 grounder warriors that Clarke herself killed weeks earlier by blasting them with the engines of the ship when she saw no other way to stop their attack. This was not an evil act so much as a necessary one, yet Clarke must live with those actions, feeling the pain of the grounders who lost loved ones in that field.

As a network, the CW often gets flack for being lightweight and silly. The general CW formula is to take beautiful teenagers and put them in extreme sci-fi or fantasy situations, which often feels shallow. The 100 is not a perfect show, but it is a show that takes problems as complex and consequential as anything on Game of Thrones or Battlestar Gallactica and puts them in the hands of a believable teenage girl. As fiction writer Kelly Link said, “I’m no longer watching television in which middle-aged men figure out how to be men. I’d rather watch shows about teenaged girls figuring out what it means to be a monster.”

Related Listening: Sci-fi scholar Walidah Imarisha talks about social justice and the use of violence in Octavia Butler’s work on our “Feminism and Sci-Fi” podcast.

Leanna Moxley watches all the television, and teaches writing at Portland State University. You can find more of her work at intheproblemattic.tumblr.com/writing
by Leanna Moxley
View profile »

I think this review misses the fact that there are no assigned gender roles here, except perhaps in the "civilized" group of Mt Weather. The landing party craziness is equal parts boys and girls, amazed that they are alive and facing a rather daunting situation. There are boys who embody honesty and bravery without violence (Wells and Finn), and there are girls who "shoot first, ask questions later" (pretty much every grounder we've met). I think the core of this show is that it is better to make decisions out of hope than out of fear, and that gender has nothing to do with this.
I will say, though, that Clarke and Octavia and Raven and Anya are so many kinds of awesome badassery.

I would argue that while gender is not always overt there is a lot of subtle gender stuff that happens in the show, though going into detail would mean getting into spoilers. I'm thinking particularly of Bellamy and Octavia's relationship in the Pilot, Abby versus Jaha, and the way Finn and Clarke handle risky situations in different ways. In the early episodes there is a gendered dynamic of men wanting to be the protectors of the women, but that does change over the course of the show, for the better. It's complicated, and the characters definitely don't fall into clear male/female behavior categories, which is a great thing!

Thanks for this! It never would have occurred to me to watch the show without your review, but I, too, have grown weary of watching men learn how to man. Many of the plot points you mention echo both Octavia Butler's Xenogenesis trilogy and Parable of the Sower/Talents, though I realize the show will be no Butler novel.

I read the Xenogenesis trilogy this past summer, Parable of the Sower in the fall. They were on my mind as I watched the show and wrote this piece, though The 100 has definitely not reached Butler's level of sophistication!

<p>Reading this review reminded me of <em>Dawn</em>—I'm not sure how closely it's echoed in the show, but a woman dealing with creating a new society on Earth and seeking peace rather than firepower seems to reflect a lot of the themes in Octavia Butler's work.</p>

I read the first book of Xenogenesis when I was not much older than a teen. It was as fascinating as disgusting. The continuous sensation of the main character (don't remember her name) being helpless during the entire book was really hard to get through. I re-read it around 10 years later. Still felt bad, although I knew what to expect. That book really impressed me. I'm not sure if I could say I liked it, but I definately won't forget it. Not sure if it matters, but I'm a male. It's getting close to another 10 years since my last read, maybe I'll start thinking in giving a try to the whole trilogy.

also visit my blogs
get all the latest news about upcoming Valentine days:

<a href="http://androidsilverseries.com/happy-republic-day-2015-images-wallpapers... republic day 720p and 1080p wallpapers and images</a>