What Happens When White Men Talk About Black Women in Sports 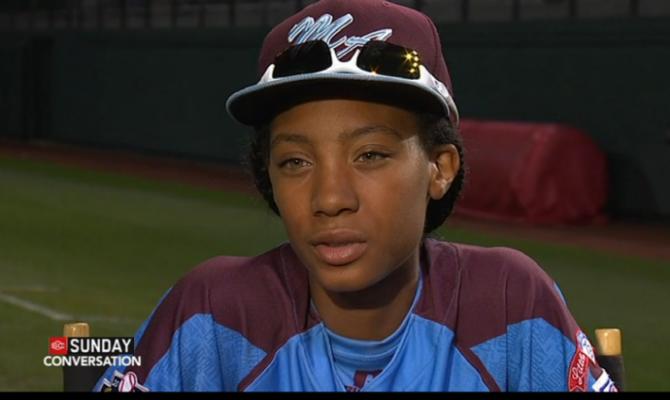 In last week’s Little League World Series, Mo’Ne Davis was the all-star on the pitcher’s mound: she became the first girl to throw a shutout game in the history of the series.

Davis, at only 13 years old,  is arguably the youngest black female to ever enter into the multi-billion dollar media discussion that is American sports talk. The Williams sisters, Gabby Douglas, and other stars were at least 15 when their names began to grace the ESPN crawl space; Davis has now been made a national symbol for girl power.

But what happens when the sports conversations turn from NFL drafts to the subject of a black, underage girl? In a dialogue performed by and for men, the discussions about Davis have often had an undercurrent of contempt for women’s sports, a condescension that’s heightened in black-dominated sports.  Amidst all the ”you go girl!” rhetoric, we’re still celebrating the basic fact that a girl is able to play baseball just as well as the boys. That shouldn’t be such a surprise.

While the coverage of Mo’Ne Davis has been mostly very supportive—it doesn’t really get bigger than landing on the cover of Sports Illustrated—some of the commentary around her has been flippant and negative. Fox News host Eric Bolling asked Davis why she doesn’t play a “more female-friendly” sport, like soccer. These comments, delightfully, have been the exception rather than the norm, but the signs of contempt are still there. Looking at the coverage closely, much of commentators’ enthusiasm comes from the surprise that she isn’t just playing, but that she’s actually good. That plays into the assumption that women aren’t as athletically talented as men. Some of the wonder over Davis is rooted in the fact that girls have been excluded from the top tiers of Little League (and all sports) because people thought they weren’t coordinated, skillful, or strong enough to play them. 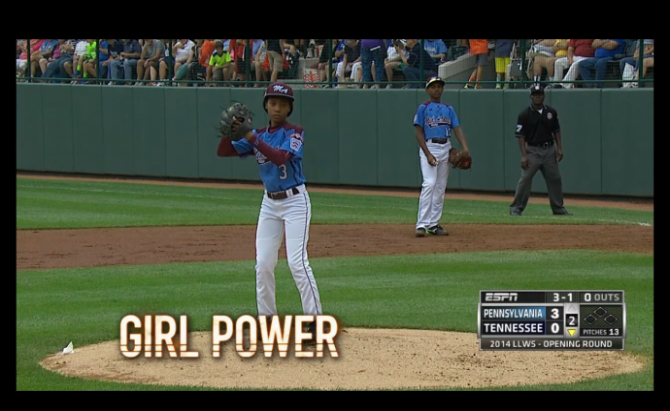 A still from ABC News — will we ever get beyond “Girl Power”?

So, how can the discussion change? Well, actually having one is a start. One of the reasons women’s sports haven’t been given the coverage they deserve is because they simply aren’t covered by female anchors. With the exception of the hyper-visible Sage Steele on ESPN, SportsCenter and other  sports shows continue to be dominated by male anchors, pundits, and sports experts. My worry isn’t just the lack of visibility of women on screen, but how having no women as part of the conversation impacts what gets said and what sports get attention. The overall lack of coverage of female-only sports is sparse at best. Mo’Ne Davis’s success is a rare example of women’s sports blowing up into headline news over something positive, rather than a negative story. As a consistent consumer of all things basketball and a self-identified sports lover, I can confidently say that the Don Imus scandal is still the most extensive coverage women’s basketball has had in years.

But the generally positive response to Davis’s skills is rather new. In past examples of times when black female athletes graced the nightly news, the rhetoric has often been personal and critical. Commentators and viewers alike detracted from Gabby Douglas’ athletic prowess during the 2012 Olympics when they discussed her “unkempt” hair, a trope used to express the general disgust with black women’s hair and their failure to adhere to white beauty standards. And an even more inflammatory case occurred in the international scrutiny of runner Caster Semenya’s gender and appearance. After she won a silver medal in 800 meter dash at the 2009 world championships in Berlin, Semenya was outed as intersex and subjected to a media blood bath about whether she was feminine enough to compete among women. The International Association for Athletics Federations required her to undergo “gender verification tests” before returning to competition.

Davis is definitely breaking down barriers in a very loud and wonderful way and that should be celebrated. But I think we could take a lesson from Mo’Ne, who sloughs off her doting fans with the utmost humility and an “I am who I am” attitude. “I never thought that I would be a role model at this age… so I just have to be myself,” Davis told ESPN last week. She’s not focused on trying to represent anything—she just wants to play baseball.

As long as patriarchy reigns supreme and people like Donald Sterling own teams, this type of stuff will always exist. But fear is that despite the abilities of people like Mo’Ne Davis to break through all the opposition, sports will remain a man’s arena, and one where misogynist and racist behavior isn’t just ignored, but encouraged.

Fixing the problem remains complicated: To create a vocabulary generated by and for black women in sports, sports networks need to hire more (black) female commentators and executives. But this won’t happen until  female sports still are taken as seriously as their men’s leagues. But like everything, money is at stake, and America simply isn’t as obsessed with women’s sports as they are with men’s, (a by-product of the gladiator, cock-fighting complex around black male bodies that I won’t get into) and a lack of interest in these leagues means a lack of money.

I understand the coverage of male sports is rooted in the capital it generates, but not validating us in sports is a disservice and disrespect to all athletes regardless of gender. It’s not too much to ask to see that girls get a fair shake at their dreams without being scrutinized.

Related Reading: The NFL Has a Domestic Violence Problem.

Mali D. Collins is a black writer residing in New York City. She writes about contempoaray art, feminism, and thinks about basketball—a lot. You can find her on Facebook and on Twitter: @ovaryeasy. 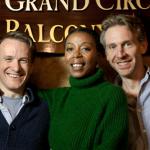 by Sarah Mirk
Casting a Black woman as Hermione is a big deal.