What Makes a Good Mother, According to the Government? | Bitch Media

What Makes a Good Mother, According to the Government?

Supporters of the RISE Out of Poverty Act staged a protest at the White House this week. Photo by the Every Mother is a Working Mother network.

This Monday morning, July 14, moms who had received welfare and their allies gathered outside the White House singing about the need to recognize mothering as work, to the tune of “Walking in a Winter Wonderland.”

Raising kids is no vacation

A mothers chance for living wages too.

The rally was called for by the Welfare Warriors, a grassroots organization of women and children battling poverty. The call was taken up by other groups and advocates working to end poverty. Together, they’ve been pushing for caregiving to be recognized—and financially supported—as work, namely in the form of the a proposed bill called the RISE Out of Poverty Act.

“We’re up against a whole prejudice and bias against welfare mothers,” said Pat Albright of the Every Mother is a Working Mother network. “It’s so strong.” Under the current welfare system, mothers needing government assistance are forced to seek work. But welfare only considers jobs outside the home as work. Caring for children inside the home is not. Thus, countless numbers of mothers are required to leave their children with others so that they can look for jobs, no matter how low-paying or unrewarding.

The bias against helping mothers (and their children) stay out of poverty is nothing new. It not only predates the current welfare system, but even the founding of the United States. As far back as colonial times, town laws focused on excluding those who might drain town resources.  Single women, whether they were divorced, abandoned or simply unwed, were seen as especial threats. In her book Regulating the Lives of Women: Social Welfare Policy from Colonial Times to the Present, Mimi Abramovitz discusses a case that occurred 1680: pregnant and unwed Sarah Neale arrived in Providence, hoping to live there. Town officials warned her away.

Over three hundred years later, government policies still tend to avoid supporting single mothers.  When assistance is available, programs are often used to control the lives of women, rewarding those who fit narrow definitions of “good” or “deserving” mothers while ignoring those who do not. Both then and now, definitions of “good” mothers frequently exclude those who are poor, unmarried, immigrants, and people of color.

Let’s look at some of this history. In the early 1900s, state and city governments proposed pension programs for mothers that would financially enable mothers to “maintain suitable homes for the rearing of their children.” But not all mothers were seen as equally deserving. In a 1909 statement to Congress, President Theodore Roosevelt explained that Mothers’ Pensions should be reserved for “parents of good character suffering from temporary misfortune and, above all, deserving mothers fairly well able to work but deprived of the support of the normal breadwinner should be given such aid as may be necessary to enable them to maintain suitable homes for the rearing of their children.”  In other words, women who were widows were good mothers who deserved assistance. Women whose husbands could temporarily not serve as the “normal breadwinner” deserved assistance. But unmarried or divorced mothers? Not so much. In 1931, widows headed over 80 percent of families receiving Mothers’ Pensions. Only three states, Michigan, Nebraska and Tennessee, officially aided unmarried mothers and then only barely—a 1934 study of the 2,000 Michigan families receiving Mothers’ Pensions found that only 25 were headed by unwed mothers.

In addition, reflecting the racist idea that mothers of color can never be “good” mothers, the vast majority of beneficiaries were white. According to Regulating the Lives of Women, In 1931, only three percent of the 46,597 families who benefited from the Mothers’ Pension program were Black; half lived in Ohio and Pennsylvania. But most states did not bother assisting Black mothers at all. 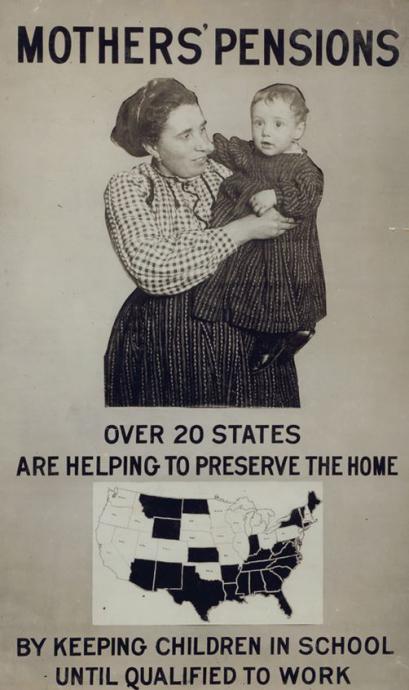 Laws about who qualified for a pension varied state-by-state. Image source.

The 1935 Social Security Act heralded a policy called Aid to Dependent Children (ADC)—what we now know as welfare. Like the Mothers’ Pension program, ADC meant to keep women in their traditional gender roles as mothers and homemakers. It provided financial assistance to children but not to their mothers. It reinforced “traditional” values that were rapidly being undermined as more women left home, postponed having families and sought independence. In 1962, ADC was changed to Aid to Families with Dependent Children, entitling support for the caregivers of the children as well. But the controlling aspects remained with many states adding a “suitable home” policy, allowing agencies to stop aid if homes were not found “suitable” for children.

Like the abhorrence of supporting single mothers, the notion of a “suitable” home has far-reaching roots.  As Regulating the Lives of Women spells out, during colonial times, the same governments that often sought to avoid aiding poverty-stricken mothers also separated children from these same parents, labeling them unfit. Instead of being allowed to remain with their mothers, children were indentured or involuntarily apprenticed to “more responsible” (or not-poor) homes. This thinking has continued throughout the centuries. Even today, poverty is often the justification for removing children from their families.

Even with these restrictions, Aid to Families with Dependent Children has provided a way for mothers to be able to support their children although not in the extravagant manner that conservatives claimed. China Martens, my co-editor of the anthology Don’t Leave Your Friends Behind and my co-conspirator for many events aimed at improving childcare, raised her daughter on welfare. In her zine The Future Generation, she recalled:

Welfare usually just about pays your rent…I received $80 in food stamps in California where my cash grant was $500 and my rent for a bedroom, bathroom and kitchen was $400. This leaves you with no money for let’s say toilet paper, bus fare, a phone, entertainment, etc.

But, she notes, “welfare was a safety net that would let you raise your own child and not be dependent on a bad situation without an alternative.”

Then came welfare “reform.” In 1996, President Clinton changed what he called “welfare as we know it,” making it more draconian. Welfare “reform” placed a five-year lifetime limit on welfare, excluded benefits for children born to mothers already on welfare, required recipients to work after two years regardless of whether their child(ren) were still young, and enacted a lifetime ban on welfare benefits for people with drug felonies or who had violated probation or parole. This last stipulation excluded over 100,000 women from welfare programs. Follow-up studies found that in Michigan, up to two-thirds of people pushed off welfare remained unemployed.

Those who remain on welfare must forego parenting for work programs and job searches. One of the women singing outside the White House on Monday is a grandmother. She currently watches her two grandchildren while her daughter fulfills welfare’s work program, spending eight hours a day searching for a job. For those forty hours, her daughter receives $631 each month to support herself and her two children. In the meantime, the grandmother’s job caring for the children all day is not recognized, let alone reunmerated, as work.

But past and present welfare mothers, as well as family members and supporters, have been fighting to change this dire reality and to have mothering (and other caregiving) recognized as work. They continue to advocate for the RISE Out of Poverty Act which pushes to reduce poverty by actions such as increasing benefits to meet families’ basic needs, ending the lifetime ban for those with drug felony convictions, and allowing mothers to refuse jobs below minimum wage or at work sites on strike or lockout. It would also require states to provide benefits for families who are at risk for having their children removed because of poverty.

The Act will also allow caregiving to count as work activity, noted Pat Gowens of the Welfare Warriors. Rather than requiring mothers to leave their children for up to eight hours to search for work elsewhere, the Act would recognize parenting as their work activity: “We’ve taken to the streets to demand recognition of motherwork as work—for recognition and for pay.”

Related Reading: What Pennsatucky’s Teeth Tell Us About Class in America.

It's about time to see a bill proposed in Congress that moves in the direction of the elimination of poverty. The most impoverished moms, those on welfare, have been demonized by both the right and the left. The impact is that our children, like their mothers don't count and are treated in policy like a nuisance, so that moms could spend their time doing "productive work". In the last Presidential election, Mitt Romney said every mother is a working mother, and President Obama said being a mom was the hardest job their is. Its about time policy makers put their money where their mouths are! I for one support the Rise Out of Poverty Act and support the Stop the War on the Poor Campaign.

I agree that more should be done to enable people to care for their own children rather than be forced into low-paying jobs that in turn force them to pay others to care for the children. But in the "work vs. welfare" debates, I rarely read about any action directed towards getting the fathers of these children to bear responsibility. I thin I read somewhere that for every $1 spent on enforcing parental child support, states save $2 in welfare payments.

I'm tired if letting men off the hook. I understand not all of these men are fit to parent, but they must be held accountable financially. If a man fathers a child, he is as responsible for that child as the woman is. Feminism will fail unless we put some muscle behind that and stop treating men as passive spermatozoa donors.

I'm all for supporting poor moms, but I want my tax dollars to go towards ensuring that dad is contributing whatever he can first. Other women should not have to pick up the slack for men.