While it was approved after a long, ridiculously morality-driven battle three years ago for younger women, recent research reveals that the HPV vaccine Gardasil and Cervarix prevents four types of cancer in women up to 45 years old.

But despite its cancer-killing qualities, some insurance companies currently refuse to cover the vaccine. The entire shot series carries a hefty pricetag anywhere from $375 to $600 and some doctor's offices demand cash up front for the vaccines, in case the insurance company falls through. Reports from Detroit and nationwide reveal that women are having trouble getting ahold of the vaccine – some pharmacies do not carry it because it's so tough to nail down insurance money.

One smart idea (while we're waiting around for national healthcare reform, that is) is state legislatures can require insurers to cover the cost of the vaccine. Planned Parenthood's political action wing and forward-thinking legislators have written up bills in several states mandating HPV vaccine coverage, but they're running into the same old anti-sex hurdles that held up the vaccine in the first place.

As of June 4th, insurance companies in Oregon are required to cover the vaccine, but not before conservative legislators got some dirty words in about the vaccine. The Oregonian reported that as he voted against the bill, Representative Ron Maurer of rural Oregon town Grants Pass, explained, "It really came down to 'show me why they need it.'" Um, because it prevents cancer strains that kill 40 women in your state every year, Ron.

The rhetoric from other states considering similar bills is even worse. In Louisiana, the debate this January over whether insurance companies should be required to cover the life-saving vaccine devolved into a knuckle-dragger's ranting session about female promiscuity. "People don't die because they didn't get a vaccine. They die because they have multiple sexual partners encouraged by the early onset of sexual activity," opined Gene Mills of the Lousiana Family Forum (a group which, by the way, nearly received a $100,000 grant to promote science education).

While I will reserve judgment on this new-ish vaccine unitl a few more years have gone by (that's just science talking, not moralizing), I absolutely believe that this vaccine should be covered by insurance for any one who wants it. Although, it appears to occupy that same gray area as birth control pills. While insurance companies and the elected officials who bow down to them will subsidize erections for the flacid (via Viagra-which is very often covered by insurance), they are unwilling to cover cancer- and pregnancy- preventing drugs for the responsible.

I'm an American ex-pat living in Australia, and I'm super-shocked to see that this vaccine is still so controversial back home. I'm pretty sure it was developed here, and we have a reasonably good public health care system. Thus, when the vaccine was rolled out, it was offered for free to women under age 26. Some family doctors were encouraging men to get it too. I didn't hear any negative feedback - just public health posters everywhere encouraging young women to get to the doctor and get it. Yet another issue where all that propaganda about the US being the best place on earth just doesn't ring true...not that Oz is perfect...

Relevant: Disability is Not a Deficit and Other Truths in an Ableist World 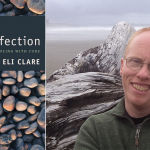 by Leah Lakshmi Piepzna-Samarasinha
What would our lives, movements, and communities look like if we moved towards restoration, not cure?