When Someone in the Sex Industry is Attacked, It's Victim-Blaming Business as Usual | Bitch Media

When Someone in the Sex Industry is Attacked, It's Victim-Blaming Business as Usual 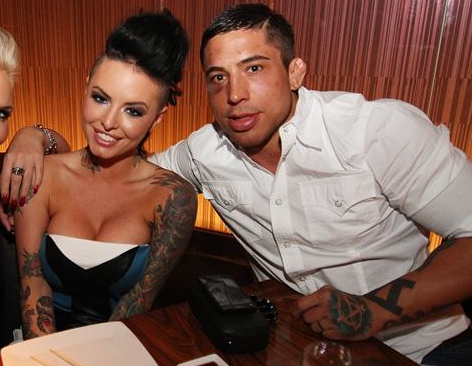 This past Monday, a woman named Christy Mack took to Twitter to post an almost unbearably disturbing series of photos and an account of a savage beating at the hands of her ex-boyfriend, a mixed-martial artist who calls himself War Machine. In the photos, Mack lies in a hospital bed, her face and legs covered in mottled bruises; her eyes swollen shut, and behind ballooning lips her teeth are broken. Her description of the attack features an enraged War Machine (real name: Jonathan Koppenhaver) arriving at her house in Las Vegas to find Mack with a male friend; after wordlessly beating the other man, Koppenhaver, recalls Mack, “made me undress and shower in front of him, then dragged me out and beat my face,” and also “sawed much of my hair off with [a] dull knife.” She escaped when Koppenhaver left the room briefly, running naked from her house and knocking on doors in her neighborhood.

It’s a story that, to any sentient person, should be sickening, horrifying, and completely indefensible. Because Mack is a former porn star, though, plenty of people in the media and beyond have taken the incident as an opportunity to shame and blame. “That was one facial Christy Mack didn’t see coming,” joked one wannabe Daniel Tosh on Twitter. Someone calling herself “Godsholywarrior” took it upon herself to post some exciting pictures of lakes of fire alongside the tweet “please reconsider your Career and lifestyle if you don’t want to go to hell.” And others replied to her Twitter dispatches with messages so cruel that typing them out makes my fingers want to hurl.

The fact that War Machine is an MMA fighter doubles the blame heaped on Mack, and plenty of people commenting on the story seem to be doing so mainly to shrug, Well, what did she expect? Dispensing wisdom like “You date a knucklehead, you end up getting the knuckles,” these sages efffectively put the onus of the attack on Mack herself, especially given her revelation that this wasn’t the first time she’d been beaten by Koppenhaver. “You decided to push his buttons till you ruined him,” accused one follower. “A lesson learned eh christy” shrugged another. “WHY DIDNT YOU LEAVE?” pressed another women.

Perhaps it’s true that were Mack not well-known as a porn star and tattoo model, this wouldn’t be such big news to begin with. But coming on the heels of very recent headlines about domestic violence, sparked by a video showing Baltimore Ravens player Ray Rice dragging his unconscious fiancée out of an Atlantic City elevator—hell, coming on the heels of every media account of domestic abuse ever—it makes sense to be wary of how the media will handle this story. ESPN commentator Stephen Smith, after all, reacted to the Rice news by delivering a monologue about “elements of provocation,” musing on how partners of domestic abusers need to consider their role in perpetuating “wrong actions.”

Though there was an online outcry against Smith’s sentiments, as well as a social-media campaign that led to a one-week suspension from ESPN, plenty of people agreed with him. For every abuser whose actions have been brought to light, whether it’s John Lennon or OJ Simpson or War Machine, there is a chorus of people at the ready to wonder just what “she could have done” to “drive him to it.”

Comments, too, are a place where the narrative can be changed, and it’s heartening to see how many people are wading in to comment sections to challenge ugly sentiments about Mack and other domestic-violence survivors. But it would be foolish to assume that a narrative as ingrained in media as blaming women for their own abuse can change with one or two stories—so as this one unfolds, let’s take care to push back on the shame, the framing, and the stigmatizing that go into constructing the narratives of Mack, and those like her.

Her job (well, former job) doesn't have anything to do with this guy's stupidity.

<p>I agree, although I have a hard time seeing any reason to abuse anybody in any way. I was sexually abused as a boy, does that mean that I deserved the abuse because I was a boy? Everybody deserves to live a life without abuse. I'm 10 times more of a man then the abuser. I treat a woman as a lady. She has feeling the same as me. I hold my hand open to hold hers. I hold her softly. Abuse lasts a lifetime, and the abusers are cowards, they are scared. They are not men, they never will be until they learn that loving some one comes from the heart. not a show of being macho. A real man knows when to hold a woman, when to cry from her pain, and when to hold her hand and listen. Please stop blaming the abused person, we all make mistakes. I never became a father, partly because I was afraid of what I might do, the abuse stopped with me. Thank you for listening to me, and I hope I have made a difference in some small way to help people understand what it's like to be abused.</p>

I am sorry to hear about what happened to you, and glad that you are aware of what is right and wrong, when in a relationship.
I'm also sad to hear about your choice to not have children, although I do understand the fear. I was abused as a child as well, and was worried when I found out that I was having a child that I would hurt her. That awareness alone is a powerful thing when it comes to raising a child, as a survivor of abuse. It is your choice to have or not have children, but consider this.
My father, who was abused as a child, pushed those memories away instead of dealing with them. This (and some serious drug issues) led to the abuse of me and my two siblings.
I decided that if I was to have kids, I wanted to be sure that I didn't pass on the horrible past. Basically, I felt the two best ways to stop the past was to stand up to it, and to educate my daughter and other children about it. I decided that I wasn't going to continue to let my abusive father control my life in this way.
If you hide from the past, it comes back to repeat itself. If you confront it and deal with it, you change the course and make the future better for you and those you love.
*hugs*

THANK YOU!!! Some of these recent events, and the way that the news, media and public are responding, have left me feeling sick. Since when is smoking pot a more punishable offence then beating your wife unconscious?? And, yes, Christy Mack, was attacked, beaten, humiliated and could have been killed. The lines of questioning these people jump to all have a slant towards her blame in the situation. I needed to start my morning with an article like this, the sound of another voice that is as appalled and sickened by all of this as I an. Thank you

Well said. And maybe the change in the media can start with the name of your magazine?

This is from the About Us page at Bitch Magazine, under the heading About Our Name:

For as long as we've been publishing Bitch, there's one question that gets asked over and over. And over. "Why did you choose that word as the name of your magazine?" While we're aware that the magazine's title, and the organization's name, is off-putting to some people, we think it's worth it. And here's why. The writer Rebecca West said, "People call me a feminist whenever I express sentiments that differentiate me from a doormat." We'd argue that the word "bitch" is usually deployed for the same purpose. When it's being used as an insult, "bitch" is an epithet hurled at women who speak their minds, who have opinions and don't shy away from expressing them, and who don't sit by and smile uncomfortably if they're bothered or offended. If being an outspoken woman means being a bitch, we'll take that as a compliment. We know that not everyone's down with the term. Believe us, we've heard all about it. But we stand firm in our belief that if we choose to reappropriate the word, it loses its power to hurt us. And if we can get people thinking about what they're saying when they use the word, that's even better. Bitch. It's a noun. It's a verb. It's a magazine. It's a feminist media organization.

Regardless of her previous job or who she is it still does not justitfy him beating her up. She is still a woman and he is still a man no matter what ethic background, career, religious belief, or lifestyle they choose to live. This situation is still unacceptable. If people can't put aside their jacked up opinions and accusing natures I'm seriously starting to doubt the stability of humanity.