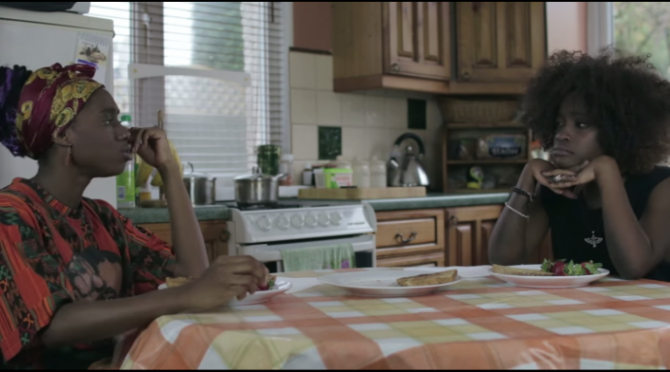 Jamaican-British filmmaker Cecile Emeke is having a moment. Her short film Ackee and Saltfish received critical acclaim after it was released earlier this year. The funny and original short film follows best friends Olivia and Rachel as they discuss gentrification in London after they can’t find a Jamaican restaurant to brunch at.

Since its release, Ackee and Saltfish has evolved into a YouTube series, so viewers can spend more time laughing with Rachel and Olivia.

While less humorous, the message of Ackee and Saltfish carries through in Emeke’s other webseries, Strolling. In these documentary shorts, Emeke walks around with young Black Londoners—mostly artists, activists, and students—and discusses issues ranging from Black mental health to typecasting and male feminists. Although most episodes are less than 15 minutes long, Emeke is able to start a dialogue around issues facing Black people in England and highlight individuals whose voices are often left out.

“I think being a Black British woman… Sometimes I feel like it’s non-existent,” said Bekke, a graphic designer, in the first episode of Strolling. “We are here, but I don’t think we’re noticed.”

Strolling highlights important issues, but the series doesn’t feel like a gender studies class lecture. With a hip soundtrack and thoughtful shots of the subjects around London, each episode makes topics like gentrification, racism, and sexism more tangible through the lens of individual experiences.

Recently, Emeke started Flâner, a French spinoff of Strolling (“Flâner” means strolling in French). Even though only two episodes are out, it is clear that Flâner is not simply the French version of Strolling. In the first episode, Christelle Oyiri Kougnon, a writer for French Noisey, and Gaëlle A-Ko, a boutique manager, discuss the lack of representations of French Black people. Kougon argues that it is consequently difficult for British and American Black people to understand the experience of being French and Black.

“When they talk to us, they can’t grasp all the subtleties of our culture, being Black and French,” said Kougon. “They always tend to refer to the ‘French Image’… Whereas we know about the struggle of African American people.”

Emeke is currently seeking funding to expand Strolling and wants to continue using YouTube as a platform to make films that “unashamedly and unapologetically” focus on the Black experience in all its nuance, she says—especially Black female experiences.