When Women Take to the Sea to Provide Safe Abortions 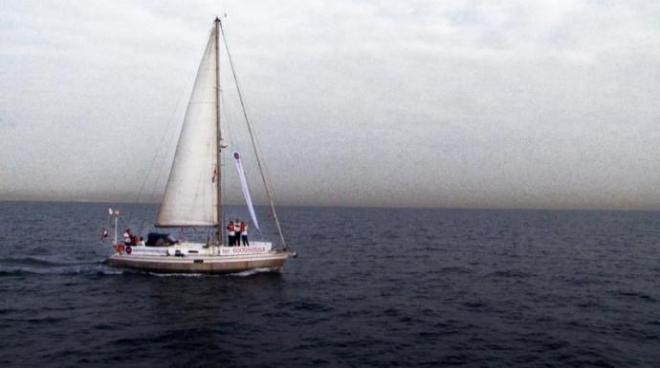 The Women on Waves ship heads to international waters to dispense the abortion pill to women in need.

The documentary Vessel begins starkly, with the reveal of a typed plea from a woman in Morocco in 2012. Her words are full of desperation: she needs to get an abortion but the procedure is illegal in her country. She is writing to an organization founded by Dutch OBGYN Dr. Rebecca Gomperts that helps women access the abortion pill in countries where abortion is illegal or extremely difficult to access.

Our first shot of Dr. Gomperts is of her racing down the stairs and outside into a loud, angry crowd of anti-abortion protesters in Morocco. They circle around her, screaming in her face, and pulling at her body. In the midst of it all, she administers and distributes paperwork that explains how women can get a hold of and take a pill that will most likely result in an abortion. It is this story—one of the desperation that illegal abortion causes and Dr. Gomperts’ tireless mission to help women access abortion in untested and unlikely ways—that is the center of this intense, emotional, and inspiring film.

Early on in the documentary, Dr. Gomperts explains how she began to think about how national laws are connected to geographical spaces. She wondered, “How could we create a space where the only permission a woman needs is her own?”

Taking inspiration from her time with Greenpeace, Gomperts realized that she could put a mobile women’s clinic on a Dutch ship, pick up women in international port, take them out into international waters and there administer the abortion pill to them. Since abortion is legal in the Netherlands, abortion is legal on any Dutch ship in international waters, which begin 12 miles out from shore. This procedure would not break any laws and women could get the medical help they were denied. And so, in 2000, the floating clinic Women on Waves (WOW) was born.

Vessel begins in 2000 when the WOW team constructed and stocked the mobile clinic. It then traces the multiple journeys that the ship took in its early years to Ireland, Poland, and Portugal. In Ireland, the crew faced harsh questions from journalists and backlash from some protesters. In Poland, large, angry crowds egged the WOW staffers. And in Portugal, the country denied the ship access into their national waters by sending two warships to threaten them. In allthese locales, hundreds of people reached out to WOW, asking for help and expressing a desire to take the abortion pill. 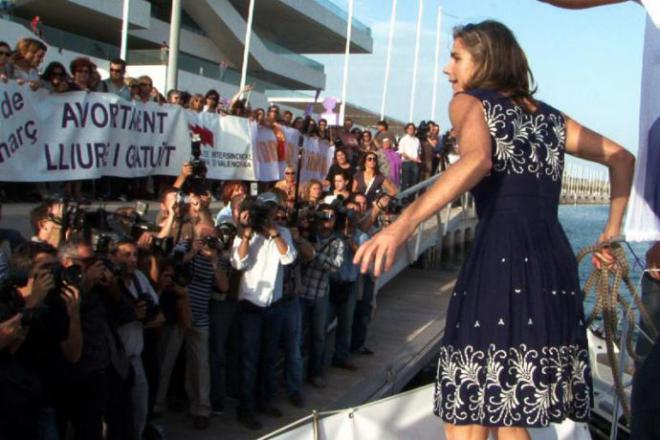 After losing a court battle with the Portugese government in 2004, Dr. Gomperts decided that if she couldn’t get the abortion pill to women, she would get the information about how women could access and take the most effective part of the medicine on their own (the generic drug misopristol is 90 percent effective in inducing abortion on its own; when coupled with mifepristone it is even higher). In 2008, a youth organization invited the Women on Waves team to Ecuador, where they traveled without their boat to help Ecuardorian activists set up a hotline for people to call to find out how to access misopristol and take it properly. Dr. Gomperts and others trained the Ecuadorian organizers in how to speak to the media and how to help people who called on the hotline. The Ecuadorians, in turn, showed the people from WOW many different ways that they could spread their message, from going on the local radio, marching down the street with the hotline number on a banner, passing out information on street corners, and totenciling the hotline number on walls with spray paint in the dark of night.

From this experience, Women on Waves launched Women On Web, an online service in which they give women seeking abortions online consultations, ship the abortion pill directly to them in the mail, and email with them while they are going through the induced miscarriage after they’ve taken the pill. The most emotionally gripping part of the movie is an email exchange between a woman in Nairobi and the staff at Women On Web. The woman is so happy to receive the pill, she tells them. But soon the effects of the medicine kick in and she experiences normal cramping and pain. She is alone and she writes to the WOW: “This is by far the loneliest I have been. I am not a monster.” The people at WOW agree, they tell her; women accessing abortion are not monsters. The next morning she thanks them for all of their help.  The Narobi woman is just one of roughly 100,000 people from 135 countries emailed Women On Web looking for some kind of help in 2012.

There are multiple lessons embedded in this film: that abortion rights are human rights, that organizing on the ground only works if you do it with local people and train them to train others, that the demand for abortion is constant and is found all over the world, and that a few people using resources creatively can actually change people’s lives.

The movie is inspiring, especially to us activists and organizers working against frustrating reproductive rights laws in our home states and countries. This was especially apparent after the screening of the film at South By Southwest in Austin, Texas, that I attended last month. After the legislature passed a series of laws targeting abortion clinics in the state last year, several badly needed clinics have been forced to shut their doors. A woman in the crowd shouted out during the Q+A with director, Diana Whitten, “Come to Galveston! Sail In!” Another stood up and simply wanted to share her experience last summer protesting an anti-abortion bill in Texas. “It was very scary,” she said, “but it was the most alive I’ve ever felt.” With all the political drama going on in Texas, Whitten admitted that she had been nervous about the response they’d receive premiering the film in the state.

In the end, there were no protests at the SXSW screening. Instead, festival organizers selected Vessel as one of eight documentaries (out of 892 filmmakers submitted) to be evaluated by their documentary jury and considered for prizes. Vessel won the special jury for political courage. I completely agree with that victory.

Vessel’s next screenings will take place in Toronto at the Hotdocs Canadian International Documentary Festival. There will be screenings on April 25, April 26 and May 4. Find out about upcoming screenings here.

Jessica Luther is a writer and activist in Austin, TX.

Thanks so much for writing about this film and letting me know it's screening soon where I live! Women on Waves and Women on Web are an inspiration. Here in the U.S., where abortion is legal but often inaccessible, as you note, people can get involved with or donate to a local abortion Fund, like the Lilith Fund in Austin, TX, or a hundred other Funds across the country. This is also a good way to use "resources creatively [to] actually change people’s lives" while we keep up the fight to change the public policies that make getting an abortion so difficult.