While She Was Out: A Horror/Thriller That's Worth a Look | Bitch Media

While She Was Out: A Horror/Thriller That's Worth a Look 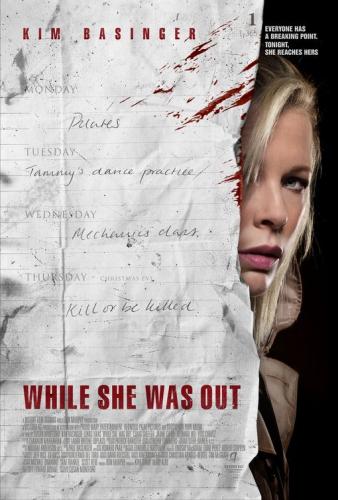 While She Was Out has a pretty straightforward genre premise: a suburban wife and mother named Della (Kim Basinger) gets involved in a parking lot altercation with a young thug named Chuckie (Lukas Haas) and his friends, who threaten to rape and kill her. The young men kill a mall security guard who attempts to intervene, and then chase Della to a construction site and eventually into the woods with the intent to kill her. The film then turns into an extended chase and fight sequence between Della and the gang. I don't want to drop too many spoilers here, but suffice to say that Della is tougher and more resilient - by far - than her pursuers, and utilizes a variety of means (including the contents of the toolbox she keeps in her truck) to the turn the table on her attackers.

This is not amazing cinema. While She Was Out has an ample amount of cheezy genre conventions, problems with pacing, a gaggle of silly villains, huge plot holes and bad production values. But what makes it worth noting is the way that Susan Montford turns numerous gender conventions about women-in-jeopardy films right on their heads, and makes some really complex - and not uncontroversial - choices about her characters. Della is a victim of domestic abuse who stays with her perpetrator husband in an effort to keep her family together and protect her two children, but her reactions to provocation and threats inside the gates of her suburban housing development and outside of it are thoughtful and compelling. Montford seems particularly interested in exploring the idea of what it means to be a survivor, and makes a lot of interesting choices despite the rather unsurprising trajectory of the action. Most of the (relatively scant) critical praise for this film is focused on Kim Basinger's performance, and it's probably one of the best of her career. Montford spends a lot of time with Basinger early in the film, and it's absorbing to watch Basinger simply walk through a mall and quietly reflect on her life and choices. She is clearly a woman at a crossroads, even before the action of the film moves her to a place where she finds herself as much a quick-witted attacker as she has been a persistent survivor.

While She Was Out is also not a film for the faint of heart. It has some fairly gruesome violence - although, to Montford's credit, the film features no nudity or scenes of sexual violence, which is always a relief in this type of movie. But it's really rather fascinating - and notable - as a horror/thriller that actually gives a damn about the female character it puts in harm's way.

You can take a look at the red band trailer here. Warning: The trailer features harsh language and some pretty intense violence. Definitely NSFW.

I downloaded a torrent of this film and was surprised by how much the abusive husband reminded me of the online behavior of co-producer Don Murphy.