When Ragen Chastain learned that Michelle Obama was appearing on The Biggest Loser to promote the show’s contestants as role models, she felt she had to do something. ” I e-mailed my friend Darryl Roberts, filmmaker of America the Beautiful 2: The Thin Commandments. We wrote a well-researched article pointing out the problems with Mrs. Obama endorsing the contestants as role models,” she says on her blog, Dances With Fat. She continues:

It wasn’t meant for this blog, but it’s now been turned down by three major media outlets. Not because they disagreed with us, in fact all three said that they agreed with the article. It was denied in all three cases because the White House wouldn’t like it, they were worried about damaging their working relationship with the White House, and it it made the First Lady look bad and out of touch.

Since Chastain and Roberts’ article, which mainly discusses the health issues that come with extreme weight loss (the type promoted by The Biggest Loser) and the fallacies of focusing on the numbers on the scale instead of the bigger picture, was censored by major media outlets because the White House might not like it, Chastain has published the full piece on her blog and is asking that Michelle Obama meet her for lunch. (Obama, you should do it!) Here’s an excerpt:

Many people do not have access to safe movement options that they enjoy, or to affordable evidence-based health care. But as long as we focus on little Johnny’s BMI, we don’t have to address the real problems here and we can just keep shaming and blaming fat kids and adults and misinforming them and everyone else about the odds of becoming permanently thin.

Michelle Obama did in fact appear on The Biggest Loser, and tips from her workout session on the show appear on the front page of the letsmove.gov website. Something for she and Chastain to discuss over lunch, perhaps? The mass media may not want to publish this article, but hey, this is the digital age! We can access this “controversial” information anyway. Read the article here and pass it on!

If you’re new to the concept of fat acceptance, check out Fat Acceptance and You by Tasha Fierce.

To characterize size discrimination as a feminist issue strikes me as misogynistic (only women care about size?). There are certainly articles to be written about the intersections of oppressions, but this article sounds like it's promoting someone who can't take a rejection letter. I don't disagree with the source article's premise at all, but it's hardly a controversial position.

@Law Feminist... since when were feminist issues limited to those that only women care about? Size discrimination does disproportionately affect women, but even if it didn't, that wouldn't exclude it from being a feminist issue. And it is, unfortunately, controversial this day and age to say that one should not be fighting against obesity (that is, against having large people in the world) but instead fighting for access to healthy living options. Those of us who work to get information out there about a "Health at Every Size" approach encounter it time and again, and having such a beloved public figure as Michelle Obama building an entire first ladyship on promoting stereotypes and fighting against the existence of large people has only exacerbated the problem. The problem already existed, though. Just look at the stories of respected Health at Every Size authors who had to prove they themselves were thin before publishers would consider their work.

Everything is a feminist issue.... And fat hatred doesn't only affect fat people. ALL women are bombarded with messages that they are "too fat" or otherwise physically imperfect, and that they need to spend their time, money, and emotional energy on chasing an impossible ideal.

I've always felt really weird about shows like Biggest Loser, and anytime oprah or dr. phil did those weight loss challenges. It seems so weird to me to praise someone's weight loss, and then as an afterthought mention how they're "healthy" and how they "FEEL GRRRRRRRREAT" it just seems so .....put on.

I've never liked these shows because they do promote that "anyone can do it" and "its just a lot of hard work" without taking into account genetic disorders, medications, and handicaps/restrictions that some people face daily that contribute to their inability to be a size 4 in their lives. 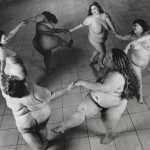 by adrienne maree brown
This is your living body; this is what aliveness feels like.